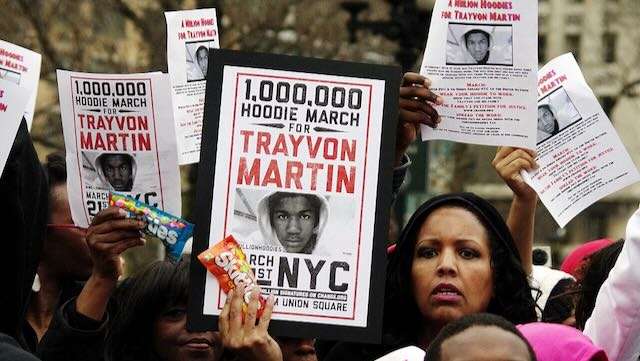 The killing of Trayvon Martin by George Zimmerman 10 years ago shined a national spotlight on Florida’s self-defense laws, specifically Stand Your Ground. Law enforcement delayed arresting and charging Zimmerman because he claimed self-defense — which prompted protests across the country.

Since becoming law back in 2005, the Florida statute has remained relatively unchanged despite high-profile cases and calls to scale back and even repeal the measure that offers shooters broad legal protections in the name of self-defense.

Zimmerman and his legal team didn’t use Stand Your Ground in his case, instead relying on a broader self-defense argument. But the controversial law dominated headlines across the county.

Florida became the first state to adopt Stand Your Ground, with support from the NRA. “It is a type of statute that describes the rights of an individual to defend themselves when they feel threatened,” says Stetson University College of Law professor Judith Scully. Since becoming law in 2005, more than half of U.S. states have a Stand Your Ground law.

Unlike previous self-defense laws, Stand Your Ground removes the legal duty to try to escape the situation. “If you have a reasonable belief that you are being threatened, you can use deadly force, and you do not need to retreat,” says Scully. “It makes it much easier for individuals to actually claim that the killing that they participated in was a justifiable killing.

Florida’s law is unique. While most self-defense laws are founded on the idea of the Castle Doctrine — the ability to protect oneself in their own home — Florida’s Stand Your Ground extends protections outside one’s home.

“Any place where you are lawfully present, you may use this stand your ground provision, which basically says you may kill and that killing will be deemed justifiable,” says Scully

That aspect of the law was seen in high-profile cases like the 2012 killing of 17-year-old Black teenager Jordan Davis by Michael Dunn at a gas station. Former Tampa police captain Curtis Reeves is in court now for the 2014 shooting death of Chad Oulsen in a movie theater. Both defendants argued a Stand Your Ground defense.

The law protects an individual using deadly force for self defense from prosecution. “It allows for you to avoid even being charged,” says Scully. “It means that the jury has been removed from the possibility of hearing the case or the judge has been removed. We just decide this on the spot and we’re done.”

Anti-gun violence groups argue Stand Your Ground promotes a “shoot first, ask questions later” mentality when it comes to self-defense. The Giffords Law Center found that Stand Your Ground laws lead to spikes in homicides where the killing was deemed justifiable and the law had little effect on the reduction of crime.

Stand Your Ground relies on the perception of reasonable fear — fear that is likely shaped by racial bias from individual experiences and media exposure. “For many individuals thinking about what constitutes reasonable fear, race is involved in that, unfortunately,” says Scully.

Sybrina Fulton, the mother of Trayvon Martin, wrote about the law in an essay penned 10 years after her son’s death. “I can’t help but wonder if the stand-your-ground laws were created with the legal killing of Black people, especially men, in mind.”

There is quantifiable evidence that the law is racially biased. A study led by researchers at Washington University in St. Louis looked at 204 of 237 total cases involving Florida’s Stand Your Ground law between 2005 and 2013 and found a defendant is twice as likely to be convicted if the victim is white compare to those who are non-white.

Nationwide, the U.S. Commission on Civil Rights looked at 2,600 homicide cases to determine the likelihood of a fatal shooting being deemed justified. In Stand Your Ground states, the study found in cases of a civilian male shooting and killing another male he did not know, the homicides were ruled justifiable in 45 percent of cases involving a white shooter — but just 11 percent of cases involving a Black shooter.

A call for change

After the death of Trayvon Martin and the acquittal of his killer George Zimmer, then-Governor Rick Scott convened a task force to examine the law. The 19-member task force recommended the Stand Your Ground law not be overturned, finding “majority of Floridians favor an expansive right to self-defense.”

Since then, the law has actually strengthen in Florida thanks to legislation bolstering self-defense protections by putting the burden on prosectors.

Still, critics of the law remain optimistic that it could be amended or even repealed altogether.

“There are multiple ways in which it could be repealed,” says Smaw, who is also a member of the American Civil Liberties Union, one organization pushing for change. “There are organizations in the state now who are arguing that it should be repealed. Hopefully that’ll gain traction and the law will be repealed in time.”

He says the law could be overturned through judicial action, with a judge deeming the law unconstitutional. Stand Your Ground could be repealed by the state legislature or even though a ballot initiative.

But with powerful allies like the NRA and the American Legislative Exchange Council, scaling back or even repealing the law will be an uphill battle. But for Stetson’s Judith Scully, recent cases of social justice, like the prosecution of the police officers who killed George Floyd, give some hope.

“When I see people organizing, when I see a collective of individuals raising up voices in dissent to what is happening, that’s where my hope lies,” she says.