A Daughter Grieves Her Mom, And Finds Herself, In ‘Crying In H Mart’ 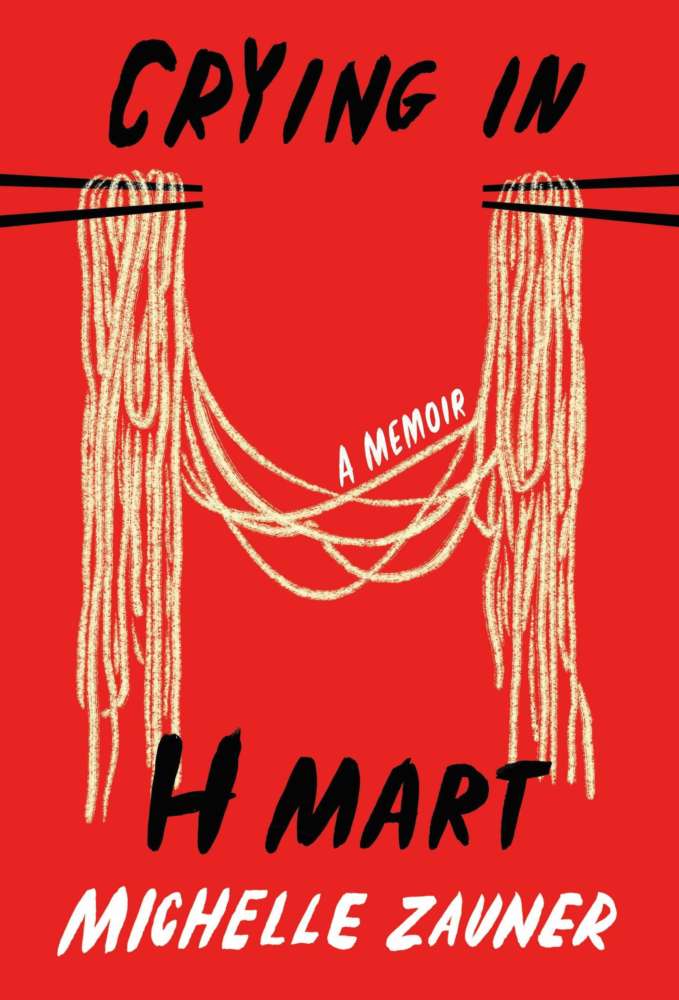 By the time I came to know Michelle Zauner as a writer, when The New Yorker published her personal essay “Crying in H Mart” in August 2018, I had been following her as a musician for five years.

I first saw her perform in Philadelphia as the frontwoman of emo band Little Big League in 2013; when she emerged with her poppy shoegaze solo project Japanese Breakfast in 2016, I recognized Zauner only in her soaring, searching voice.

Psychopomp, the first record Zauner released as Japanese Breakfast, hinted at where she had been in between: escorting her mother from the world of the living to that of the dead. The first track “In Heaven” tells some of the story of the aftermath of her mother’s death of cancer in 2014: “The dog’s confused / She just paces around all day / sniffing at your empty room / I’m trying to believe / When I sleep it’s really you / Visiting my dreams / like they say that angels do.” Those lyrics break me a little each time I hear them, reminding me of my own grief, of my own sweet childhood dog who looked for my mother and father after they both died of cancer when I was a teenager.

But where Psychopomp and her 2017 record Soft Sounds from Another Planet explore death and grief in sparse lyrics over upbeat synths, in “Crying in H Mart” Zauner digs much deeper. The essay meditates on how shopping at the Korean American supermarket H Mart brought her mother back to her but still made her loss sting. At H Mart, Zauner writes, “you’ll likely find me crying by the banchan refrigerators, remembering the taste of my mom’s soy-sauce eggs.”

“Crying in H Mart,” stood out to me as a representation of grief that I could relate to — one that doesn’t reach for silver linings, but illuminates the unending nature of loss: “Every time I remember that my mother is dead, it feels like I’m colliding into a wall that won’t give…a reminder of the immutable reality that I will never see her again.”

That essay became the first chapter of Zauner’s new memoir, also titled Crying in H Mart, which powerfully maps a complicated mother-daughter relationship cut much too short. Stories of Korean food serve as the backbone of the book, as Zauner plumbs the connections between food and identity. That search takes on new urgency after her mother’s death — in losing her mother, she also lost her strongest tether to Korean culture.

Zauner was born in Seoul, the daughter of Chongmi, a native of the city, and Joel, a white American. When she was a year old, the family relocated to Eugene, Oregon, where her mother ruled with an exacting nature. Chongmi was a woman in pursuit of perfection in everything, and of course this prodding extended to her only child. At a young age, Zauner realized that one way she could get her mother’s approval was demonstrating an adventurous appetite. On trips to Seoul, they bonded over midnight snacks on jet-lagged nights, when they “ate ganjang gejang…sucking salty, rich, custardy raw crab from its shell.”

Zauner’s food descriptions transport us to the table alongside her. On a college break, when her mother prepares galbi ssam, the relief of being cared for with a meal attuned to one’s tastes radiates off the page: “Blissfully I laid my palm flat, blanketed it with a piece of lettuce, and dressed it just the way I liked — a piece of glistening short rib, a spoonful of warm rice, a dredge of ssamjang, and a thin slice of raw garlic…I closed my eyes and savored the first few chews, my taste buds and stomach having been deprived of a home-cooked meal.”

It is this kind of care that Zauner attempts to repay for her mother when she is diagnosed with stage IV squamous-cell carcinoma in her stomach at age 56. After her mother’s diagnosis in May 2014, Zauner, then 25, moves home, ready to bolster Chongmi through chemotherapy with Korean cooking.

But chemo wrecks the appetite — I recall my mother being plagued with everything tasting as though it were laced with metal. During the first round of chemo, her mother can’t keep food down; during the second round, she develops mouth sores that make eating painful. When the chemo fails to shrink her tumor, Chongmi decides to forgo further treatment, having learned a lesson from her younger sister Eunmi, who died of colon cancer following 24 chemo treatments. In this, Crying in H Mart is a rare acknowledgement of the ravages of cancer in a culture obsessed with seeing it as an enemy that can be battled with hope and strength.

Zauner carries the same clear-eyed frankness to writing about her mother’s death five months after her diagnosis. One chapter recounts her mother’s last days, unconscious at home, her breathing “a horrible sucking like the last sputtering of a coffeepot.” It is rare to read about a slow death in such detail, an odd gift in that it forces us to sit with mortality rather than turn away from it.

Also notable is that Chongmi’s death does not fall at the end of the book. It comes just past halfway through, allowing Zauner ample space to grapple with the immensity of her loss. One balm that emerges is reconnecting with her Korean identity through finally learning to cook the dishes she longed to make for her mother.

As a teen, Zauner drifted away from her Koreanness, effacing that side of her heritage for fear of being seen as other. In those same years, she shrunk from her mother’s need for control and constant wheedling. Just as they established their adult relationship — just as Zauner begun to embrace her mother’s culture — her mother died: “What would have been the most fruitful years of understanding were cut violently short, and I was left alone to decipher the secrets of inheritance without its key.”

Near the end of the book, Zauner meditates on the process of fermenting kimchi, and how it allows cabbage to “enjoy a new life altogether.” She realizes that she needs to tend to her memories and heritage in the same way: “The culture that we shared was active, effervescent in my gut and in my genes, and I had to seize it, foster it so it did not die in me…If I could not be with my mother, I would be her.”

What Crying in H Mart reveals, though, is that in losing her mother and cooking to bring her back to life, Zauner became herself.

Kristen Martin is working on a collection of essays that meditates on grief, death, and life. She consults with writers at the Columbia University Writing Center and teaches writing at NYU. Her essays and reviews have been published in The Baffler, Literary Hub, The Cut, BOMB, and Hazlitt.