A Century After The Race Massacre, Tulsa Confronts Its Bloody Past 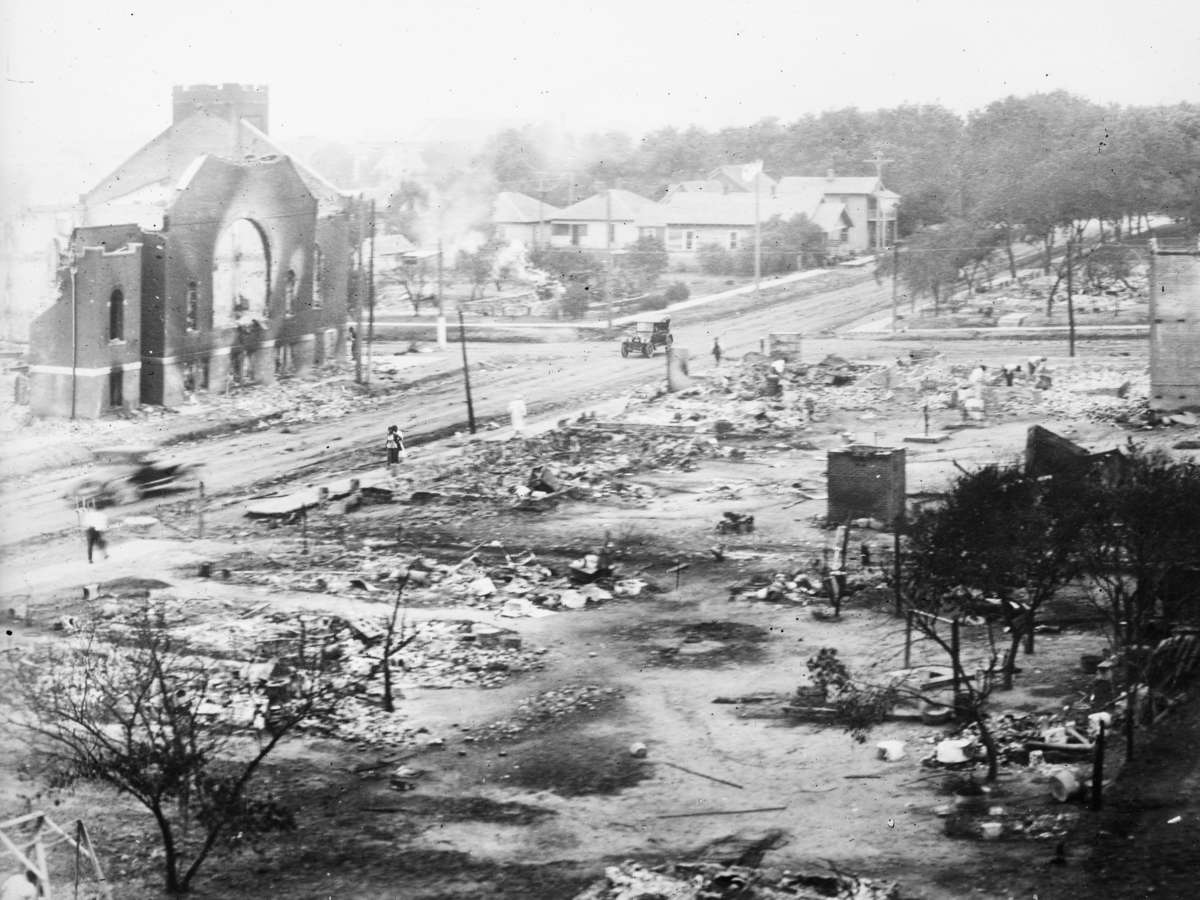 Buildings were destroyed in a massive fire during the Tulsa Race Massacre when a white mob attacked the Greenwood neighborhood, a prosperous Black community in Tulsa, Okla., in 1921. Eyewitnesses recalled the specter of men carrying flaming torches through the streets to set fire to homes and businesses.

It’s been 100 years since the Tulsa Race Massacre — one of the worst episodes of racial violence in U.S. history. An armed white mob attacked Greenwood, a prosperous Black community in Tulsa, Okla., killing as many as 300 people. What was known as Black Wall Street was burned to the ground.

“Mother, I see men with guns,” said Florence Mary Parrish, a small child looking out the window on the evening of May 31, 1921, when the siege began.

“And my great-grandmother was shushing her, saying, ‘I’m reading now, don’t bother me,'” says Anneliese M. Bruner, a descendant of the Parrish family. But the child became more insistent.

“And so, my great-grandmother put down her reading and went to see what her daughter was talking about. And indeed, the street was populated with people with guns,” Bruner says. “Bullets were flying everywhere and they fled trying to reach safety at a friend’s home.”

Bruner is able to tell the harrowing story today because her great-grandmother Mary E. Jones Parrish, a teacher and journalist, survived and documented the massacre in her self-published memoir, Events of the Tulsa Disaster.

Sitting on her porch in Washington, D.C., Bruner flips through the pages of her family’s copy which she keeps carefully stored in a plastic bag.

“The book is a small red volume, hardcover, somewhat worn,” Bruner says. “The pages are a little brittle.”

In the book, Parrish described her heroic escape from the angry mob, and her risky return to Greenwood to document the truth of what happened. She included photographs and eyewitness accounts from others, and also recounted the myriad obstacles to rebuilding imposed by the city of Tulsa. In the appendix of the red hardcover, Parrish recorded the value of the property destroyed or taken, including her own two apartments, and the secretarial school she operated.

But the book is more than just a historical account. It’s also Parrish’s plea for America to live up to the promise of democracy.

“My soul cries for justice,” she wrote. “How long will you let mob violence reign supreme?”

Bruner believes her great-grandmother’s words are a message for the nation today amid the quest for a racial reckoning. She’s worked to get the memoir republished in conjunction with the centennial of the Tulsa Race Massacre, The Nation Must Awake.

“How do you get past the trauma, the hurt, the pain, the fear, the chaos without truth?” asks Bruner, “and that is what Mary Jones Parrish brings — the truth.”

The scene was horrific a century ago when the armed white mob, fortified by law enforcement, descended on Greenwood, an all-Black district just north of downtown Tulsa. Two days of bloodshed and destruction ensued, by land and air. Despite efforts to protect their property, Black residents were outnumbered and outpowered. Eyewitnesses recalled the specter of men carrying flaming torches through the streets to set fire to homes and businesses. Then martial law, and the arrests and internment of thousands of African-Americans.

The massacre had been sparked by reports that a 19-year-old Black man had allegedly offended a 17-year-old white female elevator attendant. The murky incident got blown out of proportion by inflammatory newspaper accounts.

While events in Oklahoma over the next few weeks will seek to examine the legacy of the Tulsa Race Massacre 100 years later, it hasn’t always been that way. Historical records were mostly destroyed, and for decades it was called the Tulsa Race Riot, implying it was somehow a two-sided battle.

Tulsa — and the nation — have been slow to acknowledge the brutal reality of what happened back in 1921, and the lasting impact it’s had on Black families.

“This actually was something that was akin to an act of war where the country turned in on its own citizens,” says Tulsa descendant Annaliese Bruner.

In addition to the loss of life, there was more than $1 million in property losses which would amount to more than $20 million today. Before the massacre, the Greenwood district was considered one of the most affluent all-Black communities in the country, a mecca for African-American culture, business and prosperity.

“It was a community of self-sufficient people,” Bruner says. “They had a great sense of themselves and their place in the world — exercising their agency and full rights and responsibilities of citizenship.”

A heritage to be proud of, yet a heritage Bruner didn’t learn about until she was in her 30s, she says, when on a visit to her father in California, he gave her the little red book and revealed this part of her family’s history.

“I was speechless, stunned, amazed, proud, sad. I was grief stricken,” she says.

It helped explain some of the trauma in her family. For instance, her grandmother who escaped the massacre as a young child struggled with alcoholism.

Bruner, an editor in her early 60s, has been on coronavirus pandemic lockdown with her grown children over the last year, so they’ve had time to consider the legacy of Tulsa and the family’s heritage.

“To be the descendent of a survivor, and then for that survivor to have the presence of mind to write that down and to have the clarity of thought for it to be so detailed, so meticulously put together, is just the source of pride,” says Kevin Hurtt, Bruner’s 33-year-old son, a biologist and science teacher.

In earlier generations the story of Tulsa was rarely passed down from victims to descendants because of fear of retribution, and Bruner suspects perhaps even some shame for having endured such abuse. Hence the long-kept secret.

Bruner’s daughter, Portia Hurtt, is a 31-year-old lawyer. She finds it hard to contemplate that not only her family, but everyone who lived in Greenwood was disinherited from what their ancestors had built there.

“Looking back now, I know how the story ends,” she says, fighting back tears. “This can be a theme in African-American families where you have to do everything right. And if something comes along and derails you, that can reverberate through generations.”

Anneliese Bruner says that the country needs to be humble and acknowledge what the Tulsa Race Massacre did to African Americans, otherwise, there is no moving forward.

“There are people whose psyche is still affected generationally, trauma after trauma, after trauma just continues to build on itself,” Bruner says. “And none of it gets resolved if you’re in a system that sometimes has the unequal application of law and or opportunity.”

Bruner sees a toxic line from Tulsa to violence against Black people today, and says the same questions apply.

In 1997 the state legislature created what was called the “Oklahoma Commission to study the Tulsa Race Riot of 1921,” and it published its final report in 2001. It found that the city of Tulsa had conspired to destroy Greenwood.

“This Commission fully understands that it is neither judge nor jury. We have no binding legal authority to assign culpability, to determine damages, to establish a remedy, or to order either restitution or reparations,” commissioners wrote. Though the report also suggested that reparations to the Greenwood community “would be good public policy and do much to repair the emotional and physical scars of this terrible incident in our shared past.”

According to the commission’s report, the massacre destroyed some 40-square blocks in Greenwood. Nearly 10,000 people were left homeless as 1,256 homes were looted and burned down. And the thriving commercial district was destroyed — some of the finest Black-owned and operated businesses in the country, including hotels, restaurants, grocery stores, a theatre, a roller skating rink, hospitals and doctors’ offices, law firms, churches and realtors.

Commissioners suggested reparations such as direct payments to “riot survivors and descendants,” a scholarship fund and a memorial, among other things.

“When you talk about reparations, the challenge is that it means different things to different people,” Tulsa Mayor GT Bynum says.

“There is an acknowledgement that Black Tulsans have not had the same shot at success and a great life that white Tulsans have had over the last hundred years,” Bynum says.

But survivors and their descendants are asking. A lawsuit against the city is seeking a host of reparations including financial compensation, tax abatement, mental health services, and restitution to include the redistribution of land to the families of Greenwood’s original landowners.

“We’re really trying to get solutions and justice that’s going to change these socio-economic statistics that we’ve been living with for the last 100 years,” says Tulsa attorney Damario Solomon-Simons.

He’s the founder of the Justice for Greenwood Foundation, and represents the three known living survivors of the Race Massacre, who testified before Congress last week. A House Judiciary subcommittee is revisiting legal and policy measures to compensate survivors, their descendants, and Tulsa’s greater Black community.

Solomon-Simmons believes the pushback on reparations is rooted in the country’s historical notion of race, and the view, dating to slavery, that Black citizens aren’t entitled to the same rights as white citizens.

He says part of the difficulty in getting the white establishment on board in Tulsa is that their families directly benefited from the massacre, and in some cases participated in it.

“They don’t want to discuss the real aspects of it,” he says. “Because then they’re talking about their fathers, their grandfathers, their uncles.”

Earlier this month, in a controversial move, the 1921 Tulsa Race Massacre Centennial Commission removed Oklahoma Gov. Kevin Stitt from the panel after he signed legislation that would ban the teaching of certain concepts about race in state schools. Commission members were vocal in their opposition, arguing the law would undermine efforts to teach Oklahoma’s race history, including the truth about what happened in Tulsa.

For descendant Anneliese Bruner, coming to terms with that truth is the key to accountability. A belief she says was reinforced as she watched the Jan. 6 insurrection at the U.S. Capitol, happening just a few miles from her home.

“It was a frightening prospect,” she says. “Knowing what I know about what happened in Tulsa when, as my great grandmother called it, King Mob was in charge.”

Bruner says the nation, and in particular Black Americans, should not be living with that same fear 100 years after the Tulsa Race Massacre.