From a Classroom to a Courtroom 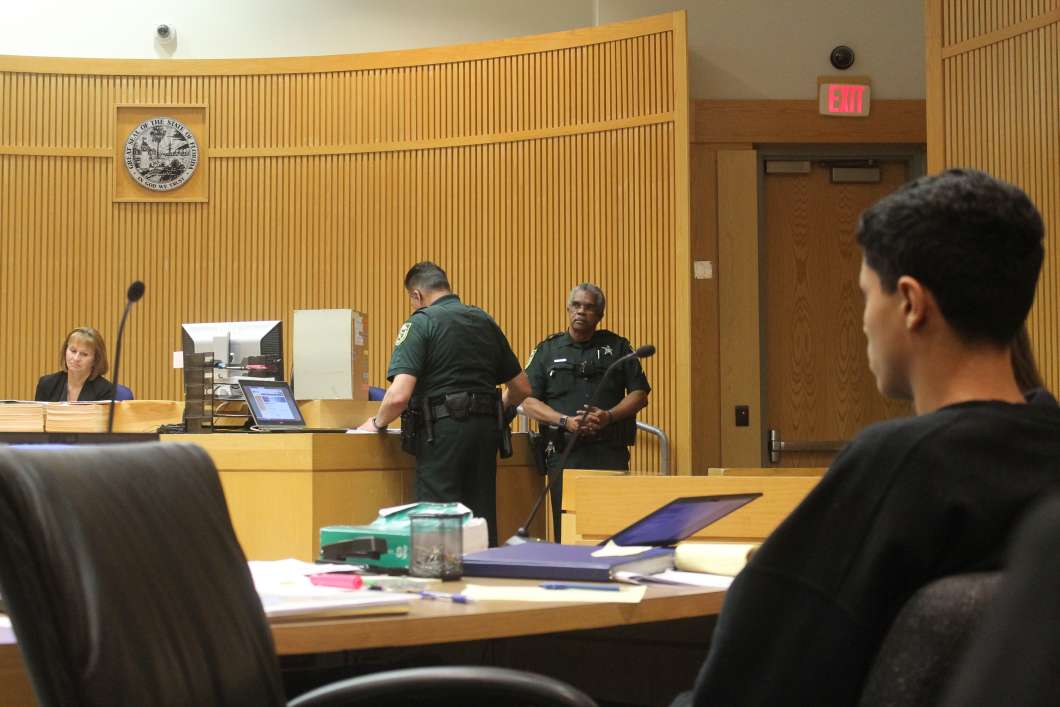 A young man attends his hearing at the Thomas S. Kirk Center for Juvenile Justice in Orlando. Photo: Renata Sago.

This story is the third of Renata Sago’s five-part series on Orange County’s high juvenile arrest rate, Young & Arrested. Visit the series page for all of the stories.

The wooden benches of teen court at the Thomas S. Kirk Center for Juvenile Justice are filled with kids in jeans and dress shirts. Their eyes are fixed on a young man reading a list of sanctions from a sheet of paper in his hands, “The defendant shall receive the following mandatory sentences,” he announces. “Forty-five hours of community service; six jury duties of teen court; supervised shopping; random drug testing.”

This peer pressure environment in which the defendant—a teenager—receives sanctions from peers—who are also teenagers—is the longest running program in Orange County to keep youth out of the criminal justice system and give them a second chance. Teenagers act as defense attorneys, prosecutors, clerk court deputies, and jury while a team of volunteer attorneys serves as judges.

For kids to end up in teen court, the state attorney typically has to send them there. Usually, these are kids who have had their first run in with the law for something considered minor that would be charged as a misdemeanor offense such as shoplifting, assault, and trespassing.

“It’s cheaper than the regular court and they seem to behave better if there’s somebody watching close to them,” says David Medvec is coordinator for teen court in Orange County. “Once you get an arrest, it hurts you, for like, the rest of your life now. They take your fingerprints and that goes to the FDLE and they send it to the federal government and they give you an FBI number.”

In twenty years, he has seen his share of cases and has found himself handling more kids facing felony charges. Because the severity of crimes has increased, many teens are not eligible for teen court.

Kent Johnson was. He came in for a battery charge on a school resource officer at Winter Park High School. An administrator asked him to take his hat off during a hallway break.

“I didn’t take my hat all the way off when she told me to, and then she called over the resource officer,” he remembers.

Kent Johnson (right) and his younger brother while at Winter Park High School.

The details of what happened next are up in the air. Johnson says the officer grabbed his arm. The officer says he “gently patted him on the back.” The incident escalated with both of them on the floor in a tussle. Johnson ended up in the back of a police car in handcuffs on his way to the Orange County Juvenile Assessment Center, the JAC.

“They take my fingerprints,” he remembers. “They take a mugshot. The counselor told me what I was charged with, but I was like whoa, a five year felony? A battery? Over a hat? I didn’t even hit him. I was just feeling disappointed. And I’m just thinking about all that like, he could really just ruin my whole life and it hasn’t started yet.”

Johnson’s case was sent to teen court where he was sanctioned by his peers. He admits he should have taken his hat off but says the school resource officer could’ve also handled the situation better.

“I don’t think it was fair at all,” he says. “He charged me […] anyways, but after it, he talked to me about what I thought he would in the beginning, like, ‘This is what this can do. This can mess your whole life up.’ And I’m like, ‘What’? That’s what had me confused. Like he’s trying to be supportive but, [he is] the one charging me.”

Leroy Pernell is a professor at Florida A&M University School of Law and a former public defender. After forty years in education and the courts, he says you cannot talk about kids without talking about schools and how discipline there is handled.

For Pernell, this issue is much bigger than being sent to teen court. It is about interactions with children. His research shows that Orange County Public Schools has had a high volume of expulsions and  a tendency to involve school resource officers in classroom issues. It is an issue he says disproportionately affects students of color in communities of high need where schools are overcrowded and teachers, overwhelmed with test preparation.

“The answer to overcrowding or not resources is not to turn him over to the cops,” he says. “We’ve gotta take greater responsibility to say, ‘Look, this is an education opportunity we need to figure out how to get through to this young person in our school system.'”

Orange County School board chair Bill Sublette says the reality is that schools also have become a receptacle for what happens in a large community with complex issues.

But he says the pendulum is now swinging away from a harsher approach to dealing with kids on school grounds in Orange County to now focusing on rehabilitation.

“Nationwide, law enforcement and juvenile justice officials and school officials have realized zero tolerance is not necessarily a good approach to student offenses and student discipline because it can be unduly harsh in many instances,” he adds.

Numbers show that, too. In recent years, only a small percentage of juvenile arrests have taken place on school grounds across Orange County—6.4 per 1,000 students, according to Florida’s Department of Juvenile Justice. That number has gone down 30 percent from the 2014-2015 academic year to 2015-2016.

Since then, Orange County Schools has launched its own diversion program, called the Restorative Justice Partnership, with three goals: To decrease the school-to-prison pipeline; dramatically decrease unnecessary arrests on campus, and more strategically address what officials call “spillover” from the community into the schools.

The district has also joined other large school districts in Florida by creating its own police force. The idea is that the presence of officers will help reduce juvenile arrests on school grounds. Officials also add that civil citations, or tickets for small offenses, will reduce arrests.

The civil citation program started in 1990. But Orange County adopted it less than five years ago. Since then law enforcement has significantly reduced the number of juvenile arrests on and off school grounds. Legislation is being proposed to increase use of civil citations for first time minor offenses, which means more cases coming to David Medvec, who coordinates teen court and the civil citation program for the ninth circuit. They come into his office; they have an assessment done on them, and they are issued a list of sanctions.

Over the years Medvec has seen funding wane for certain diversion programs. He is happy to see new attention to a program that aims to keep kids from getting records, but he is partial to the teen court model.

“I think it works better when I’m talking to somebody every other week,” he says. “They remember you. They know they’ve got things to do. I give them deadlines.”

Medvec has had kids come back to volunteer in teen court. Some have become lawyers; and others who have gone to his alma mater, Ohio State University. Kids like Kent Johnson.

“I know there’s kids out there that didn’t get to do the program I got to do and they’re probably charged and not being able to go college like I am,” says Johnson.

He feels lucky that he wasn’t sent to a detention facility or even worse.

This story is the third of Renata Sago’s five-part series on Orange County’s high juvenile arrest rate, Young & Arrested. Visit the series page for all of the stories.