Sent Away To Residential Confinement 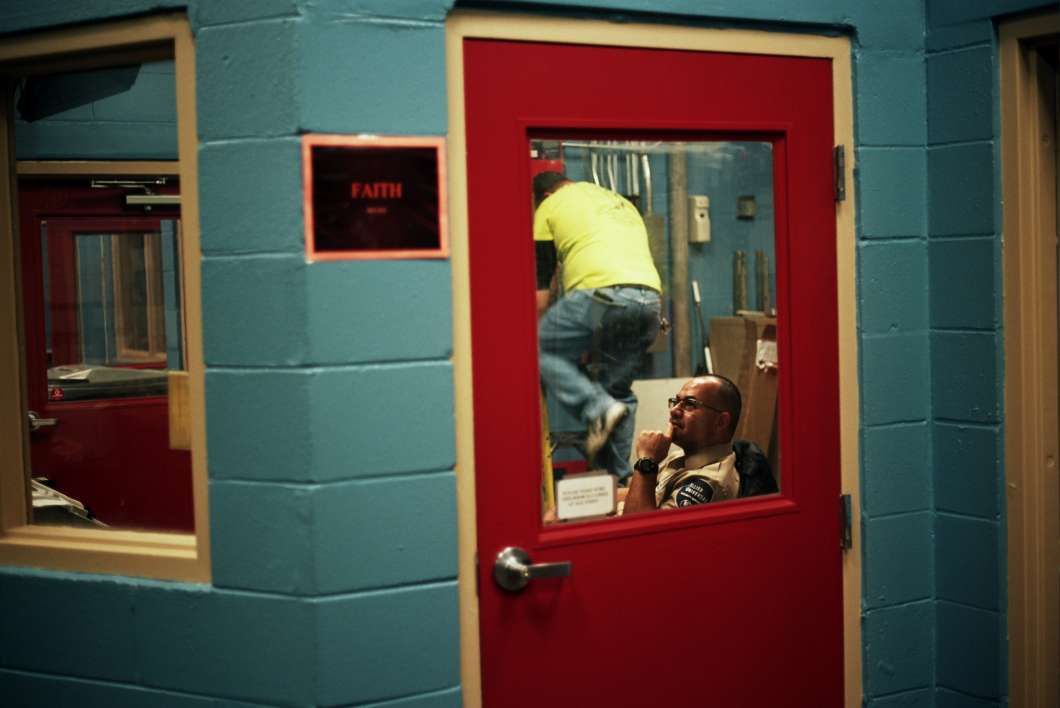 Inside a large room, two security guards monitor concrete holding cells and rows of chairs, mostly empty. A girl in a navy blue jumpsuit faces them, slumped over, with her head in her hands.  A few seats down from her, a boy watches a television overhead.

“This is what we call booking,” says Jill Wells, chief probation officer for Orange and Osceola counties. “They come over here and they get their picture made and their fingerprints done,” she adds, pointing to a smaller room with a window counter, a makeshift photo booth, and a scanner.

Wells works closely with staff at the Orange County Juvenile Assessment Center, known as the JAC. It is one of two places where youth are taken by police when they have been stopped (the other place is the Orange County Jail, known as “33rd”). The JAC is an inconspicuous building in Parramore—right across from the Orange County Health Department and within walking distance of the new Orlando City soccer stadium. Inside is a world of its own with intake staff, probation officers, private security, representatives from Orange County Public Schools, and community service providers.

Most kids who are stopped by the police are taken to the intake area at Orange County’s Juvenile Assessment Center in downtown Orlando, once a hub for juvenile arrests. Photo: Joey Roulette.

Wells remembers this area used to be a hub for juvenile arrest problems.

“Now it’s spread out so much,” she says. “You know, we go to Bithelow to Ocoee and we have kids from every direction. It’s not just Parramore and not just Pine Hills.”

At the JAC, intake staff determine kids will go next: to the juvenile detention facility or home. But first, kids get screened in a process known as a PACT assessment. The assessments gather information on kids’ schools, their mental health history, substance abuse history, whether they have been involved in a gang, and what sort of extracurricular activities they may be involved in within their community. That data is finalized with recommendations and a score, which are sent to a juvenile judge which, essentially, is their “risk factor”.

Miles away from the JAC, 20-year-old Jaylon Cobb walks through the park where he used to hang when he was a kid.

“Look at this!” he points to a broken phone booth. “This is how you know you is in the wrong part of the neighborhood, when your payphones ain’t got no phone,” he laughs.

By the time he was thirteen, he had been labeled high risk which, for him, has everything to do with growing up on 10th Street in Apopka.

“That’s one of the hardest streets to grow up on on this side of town. You can just be sitting outside and people just start shooting,” he says.

Jaylon Cobb, now 20 years old, was sent to a residential commitment facility in Pinellas County for an armed robbery at a Walgreen’s in Apopka. He was fourteen at the time. Photo: Renata Sago.

Cobb has seen more tough situations in his young years than most adults have seen in all their lives. He recounts stories of crack heads lining up to get drugs at a nearby apartment complex; of elderly neighbors being robbed and killed; of police SWAT teams raiding homes. Growing up, Cobb’s notion of family, community, and opportunities was counternormative to the experiences of a major segment of the United States, let alone Orange County.

His mom had him at fifteen years old and his dad has been incarcerated for as long as Cobb can remember.

“My father’s a drug dealer. My uncles are drug dealers. My mother, she talked to nothing but drug dealers. That’s all I really knew for a point in my life. You know what I’m saying, if I hang around a thief, sooner or later, I’ma pick up some tendencies,” he says.

He felt he had to come into manhood early—or as much as he could understand of it as a child. By the time he was thirteen, he was in a gang. He had dropped out of school and got his first charge for robbing the neighborhood Walgreen’s while carrying a gun. He was sent to the one of the oldest residential confinement programs, the Charles Britt Academy in Pinellas County, for eighteen months. The Academy is an all-male facility with twenty-eight beds and a full-service staff. It is one of more than fifty residential commitment centers in Florida—all of which are operated by private providers, many of whom are security companies.

That has to do with dollars and cents, according to Carter Hay, a criminology professor at Florida State University. In the past two decades, Hay has seen the state relinquish its direct control of residential facilities to private companies that provide services outlined in contracts with the state. Those services include security, food, medical care, and programs.

Puzone leads a class as part of the juvenile defense clinic at Barry University School of Law. Photo: Joey Roulette.

In recent years, concerns about the quality of services have led to the state canceling contracts, which has been a concern for Katherine Puzone, associate professor of law at Barry University and head of the school’s juvenile defense clinic. She has represented Jaylon Cobb and other kids sent to residential commitment facilities for the past eight years.

“They’re so understaffed compared to the number of kids they have and the complexity of the problems, that a lot of times it just seems like glorified babysitting to me,” she remarked. “And the kids aren’t getting any real help—and then they put them right back in the same neighborhood. And then they end up on the intake docket again. And I wanna go bang my head against the wall.”

That is exactly what happened to Cobb. When he returned to Apopka, he ended up with a series of charges.

“The kids who are breaking into houses and stealing cars. They’re not just bad kids,” she says. “It’s more complicated than that, and the more I learn about it, the more I think we’re kind of putting the judgments of middle class white people on kids who are living in a society that we can’t even imagine.”

Current private providers maintain that they are fulfilling their contractual obligations to the state. But Puzone would like to see the state offer incentives to private companies—ones based on kids getting their diplomas, holding steady employment, and feeding resources into neighborhoods where kids are coming from; places like 10th street in Apopka where Jaylon Cobb grew up.

Cobb got a break on charges with help from Puzone. He has earned his GED and also trained at the Cordon Bleu. Now, he is a team supervisor at McDonald’s. But his real dream is to own a food truck. He boasts about making stuffed burgers, vegan burgers, steak, and potatoes with sauteed shrimp.

Life for Cobb is good these days because, well, he’s living, he knows that there is more to life.

“I met a lot of people who did less than me. Got direct filed,” he thinks back. “I had people backing me, you know what I’m saying. You gotta give some people some kinda chance. Everybody who’s a felon is not a felon by choice. Some people was in a situation where they couldn’t help it. I was.”