In Prison By Sixteen 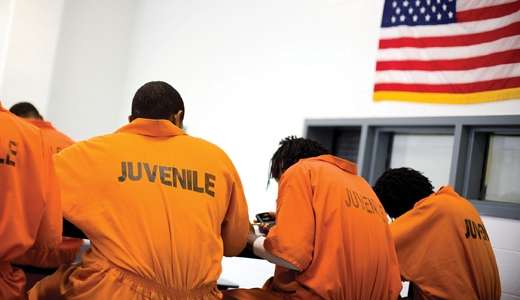 Streetlights glare inside Lieutenant Shane DeJarnett’s white unmarked SUV as he cruises through Pine Hills  past houses, churches, and pedestrians. As Orange County’s nighttime sheriff, DeJarnett keeps a close eye on what is happening in this mixed-income black neighborhood on the west side of Orlando.

“We’ve got about every walk of life here—from your very poor to the more ritzy areas,” he says. In eight years, DeJarnett has seen his share of crimes, but he’s seeing them grow more severe and the faces of those who commit them grow younger.

That was Marquis McKenzie. At sixteen years old, he was sent to prison for robbery, possession of a firearm, burglary of convenience, and resisting an officer without violence.

“I did everything I could; was going to school, trying to play sports,” the now 26-year-old remembers.

McKenzie grew up in low-income housing with his mother. His parents were separated, but he had a good relationship with his father. He remembers moving to Pine Hills while in elementary school, which, for him, was a new world with new people.

“It was just a transition from the projects to the upper class of the projects, so meeting kids and being curious.”

McKenzie picked up gambling from his family and new neighbors. He began using to skills game to increase the profit he earned from cutting grass.

“Then what really set it off,” he remembers, “My mom—she had a boyfriend and he hit her. She had to get eight stitches in her head. And after that, nothing else didn’t really matter. That was my excuse to be harmful to people.”

By fifth grade, McKenzie was getting in fights in school; by sixth grade, even more fights; even more gambling and not doing his work. When he turned fourteen years old, he was in a gang and for him, the path to manhood was making cash and earning respect for doing so.

“Most of the people I hung around that was drug dealers, they took care of their families, so it kind of looked another way to provide for my family.”

He remembers adults in his neighborhood having guns but, at the time, kids did not—that is, not until a song by well-known rapper Plies was released and took the streets like a fire. The song, “Chopper Zone,” popularized carrying guns with this one lyric in the chorus: “The streets got a law called ride with ya fire.”

“You could get two guns for $80 back in the day, McKenzie remembers. You know, it was guns everywhere.”

McKenzie would cut grass some days and worked at Auntie Anne’s in the mall on others. Then, some nights he and his friends would get even more money robbing people, armed with their guns.

“The first time we went out and we robbed somebody and it was like, ‘You know, this is easy, you know?’ Made a couple hundred dollars. Every weekend, we’d go out and rob people. Friday. Saturday. If I could make $600 or $700 in a day on the weekend, that wasn’t bad—15 years old, 14 years old,” he thinks back.

An armed burglary with a friend one evening landed him his first arrest and a ten-year prison sentence. It was over a pager and a wallet.

A young man is consulted by his public defender during a hearing at the Thomas S. Kirk Center for Juvenile Justice in Orlando. Photo: Renata Sago.

“I remember the judge. He was like, Mr. McKenzie, this is your charge. I’m sorry, but I can no longer take up this case. I remember my mama started crying or whatever. She was like, ‘Please!”

McKenzie was direct filed, meaning that his case was moved from the juvenile court system to the adult criminal court system.

“Sometimes prison is necessary,” says Jeff Ashton, former state attorney for Orange and Osceola counties.  For four years, he decided where kids like McKenzie would end up. In fact, Florida law grants power to state attorneys to send kids to adult court without a juvenile hearing or input from a judge. “A lot these juveniles that have been through the system a lot, when they get arrested, their attitude is ‘Nothing’s going to happen to me. I’m a juvenile,’ he says. “When they get direct filed to adult, it’s sort of this cruel wake up call.”

Direct filings give judges more tools to use in prosecuting kids, Ashton argues. Theoretically, sending a kid to adult court does not mean that they will have a harsher punishment, but most of the time, they do. Florida’s direct file rate in the past has been disproportionately high compared to other states, according to federal data. Human Rights Watch, in a report on juvenile justice, found that black boys in Florida like Marquis McKenzie were disproportionately sent to prison whether for first or second time offenses from 2008 to 2013. Data from the DJJ show 62% of kids sent to adult court in 2016 were black.

But Ashton, who worked at the state attorney’s office for Orange and Osceola counties over thirty years, is slow to equate the rates with racial bias in the judicial process, as civil rights advocates have argued. He urges research into how many black kids are committed crimes compared to other ethnicities rather than focusing on how many black kids have been arrested. When it comes to the handling of kids, Ashton has witnessed the shift from a tough on kids approach to now more rehabilitation. Punishment is a part of that, he adds.

“I’ve run into many people over the years that I’ve put into prison. What they’ve said to me often is, I was on a path that probably would’ve ended up with me being dead. They came out understanding what went wrong.”

For Leroy Pernell, professor of law at Florida A&M University and a former public defender, what went wrong has been the whole approach to treating kids—particularly kids of color—as adults.

“I’ve become very concerned over the years in this region of the country in particular of the willingness to forego treatment of children as children. We lock up more people for longer periods of time and at earlier ages than anywhere else in the civilized world.”

The practice of direct filing black boys, Pernell believes, stems from an inability or unwillingness to perceive children or young black males as “anything other than a crime threat.” He associates the practice with Reconstruction-era laws made to disenfranchise black citizens.

Decades later, Marquis McKenzie and other youth like him who’ve been sent to prison at kids, are disenfranchised upon release as adults.

McKenzie thinks back to his childhood charges, now as a father of two sons and the owner of a cleaning company called The Dirt Master.

“It don’t even line up the the lifestyle that I’m living right now. I always want to say it’s now mine.”

His charges will mark him for the rest of his life, from not being able to vote or get access to a home loan with ease, or obtain employment without checking a box that indicates he has been charged with a felony.

**Read more about McKenzie’s story here, in a column published in the Orlando Sentinel.**