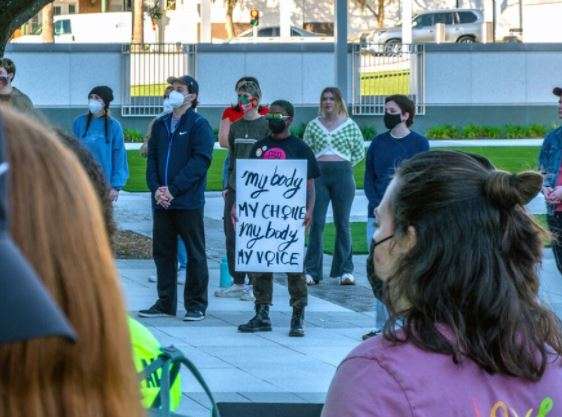 Protestors began chanting "my body my choice" just as members of the House were preparing to vote on a bill that would ban most abortions after 15 weeks. (Patrick Sternad/ WFSU Public Media)

Members of the Florida House passed a measure just after midnight that would ban most abortions after 15 weeks. After hours of debate, protestors erupted in the chant “my body my choice.”

House speaker Chris Sprowls instructed the sergeants to clear the chamber and after a brief recess lawmakers returned to vote—passing the bill 78-39.

After the floor session Sprowls fielded questions from a reporter who suggested the protestors were reacting to a statement from bill sponsor Rep. Erin Grall (R-Vero Beach). Sprowls disagreed.

“The idea that they were somehow reacting to Representative Grall is ridiculous and it’s also completely and utterly inappropriate to have an outburst like that that disrupts the people’s business,” Sprowls said.

The chants from protestors came as Grall closed on the bill. Grall said the phrase “my body my choice” is often repeated during discussions on abortion access.

“The phrase my body my choice ignores the reality that indeed there was a choice. There was a choice,” Grall said. “We never talk about that, the choice that a woman made—a woman and a man made—to engage in sexual activity. We never talk about that being the choice. And choices have consequences, and we all know what the consequence of that activity is. It is the potential life that will come from that choice.”

Grall’s closing statement followed a lengthy discussion from members on both sides of the aisle. Rep. Anna Eskamani (D-Orlando) was the last to speak for her party in the structured debate. She pointed out that despite attempts to amend the measure, the bill includes no exemptions for people in cases of rape, incest or human trafficking.

“My heart just hurts that we don’t have these types of exemptions. I don’t want to belabor this fact, but I just don’t understand how exceptions for rape, incest and human trafficking is something this body could not support in a bipartisan fashion,” Eskamani said.

Eskamani also pointed out the measure conflicts with rulings in both the U.S. and state constitutions. That’s something Grall has also recognized, but she said she believes those conflicts will be easily cleared. Her measure largely mirrors a Mississippi law that is before the U.S. Supreme Court and is widely expected to be upheld.