A $100 Million HIV Vaccine Project Failed. But All Hope Is Not Lost 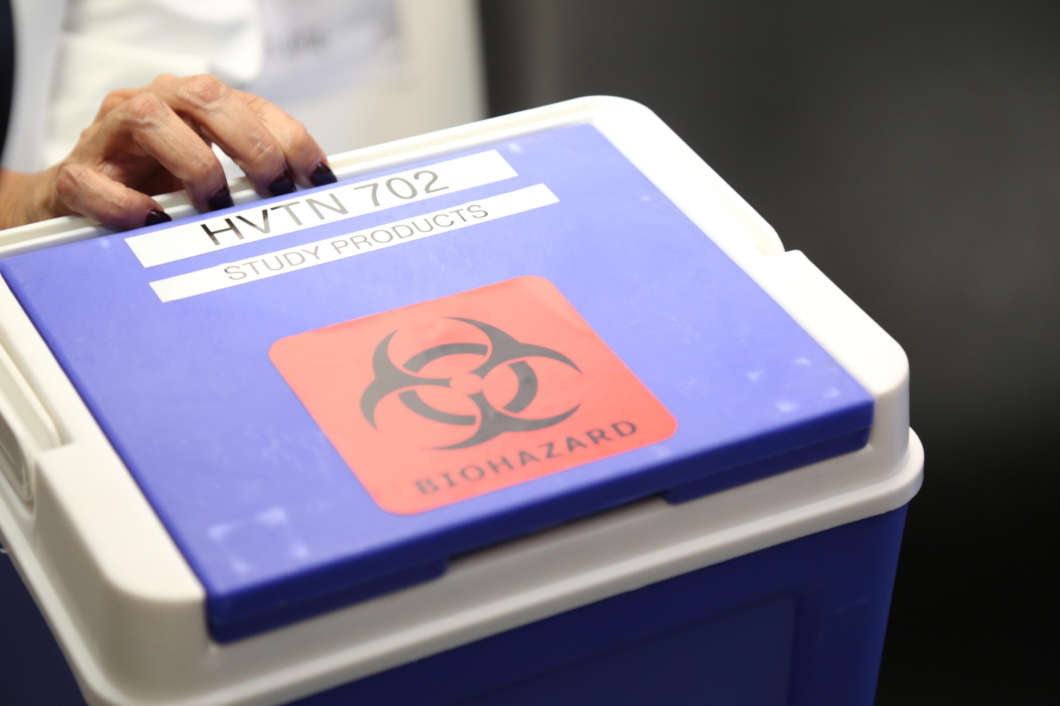 A pharmacist brings the HVTN 702 vaccine to a clinic to administer to participants in a trial in South Africa. The hope was that the vaccine would prevent HIV.
Image credit: Jackie Clausen

Infectious disease specialist Glenda Gray spent the last 10 years of her life organizing a clinical trial on HVTN 702, a vaccine she and her team hoped could protect people from becoming infected with HIV.

But during a call with an independent board that evaluates trial safety and efficacy in January, their hopes were dashed; the vaccine was not working.

For many in the HIV community, the news came as a huge disappointment. HVTN 702 was one of the most promising treatments in the industry. Now, scientists are back to the drawing board, focusing on other HIV vaccine trials and research for success.

“One hopes there’s going to be progress when one does an efficacy trial like this,” says Mark Feinberg, CEO and president of the International AIDS Vaccine Initiative, who was not involved with the study. “But a lot of people were probably not too surprised, just because the challenge [to create an HIV vaccine] is so difficult.”

There are currently 37.9 million people worldwide living with HIV/AIDS, and about 1.7 million new people became infected with HIV in 2018, according to UNAIDS.

Scientists first saw a glimmer of hope in HVTN 702 more than a decade ago. In a groundbreaking 2009 study on an earlier version of the vaccine, researchers showed — for the first time — that a vaccine could prevent HIV infection. But the results of the trial conducted in Thailand were modest; the vaccine was only effective at preventing HIV in 31% of more than 16,000 trial participants. By contrast, most routine childhood vaccinations are at least 85% effective, according the World Health Organization.

Led by Gray, president of the South African Medical Research Council, researchers worked to improve the vaccine’s effectiveness and try again, this time in South Africa — a country with one of the highest rates of HIV.

The team enrolled 5,407 sexually active men and women between the ages of 18 and 35. None had HIV but all lived in communities where HIV is prevalent. The volunteers were then randomly assigned to receive either the vaccine regimen — a series of six injections — or a placebo.

“We told all of them, ‘You must behave like you are in the placebo arm,'” Gray explains, or as if they were not receiving a vaccine.”We gave them condoms, contraception, HIV prevention counseling” and PrEP, medication that can help prevent HIV if taken daily.

Despite their efforts, 129 participants who had received the vaccine became infected with HIV after two years, while 123 infections occurred among participants receiving the placebo.

Scientists concluded that the vaccine did not prevent HIV, nor did it increase the chances of obtaining the disease.

The four-year trial was expected to end later this year, but after learning the results in January, Gray implemented a plan to quickly stop the study — which has cost upward of $100 million, according to Science. Participants were informed that the vaccine did not work, and all those who contracted HIV, an incurable disease, are now being put on treatment.

“We had to correspond with all of our participants … the stakeholders, the study staff, the study investigators,” Gray says. “Everyone is upset and sad.”

HIV is a complex virus that targets and weakens the human immune system, which is normally responsible for fighting off diseases and infections. It also mutates rapidly, making mistakes as it replicates in the body.

“[This results] in viruses that are not all identical to each other,” says Feinberg. “That means in every HIV infected person, there’s tremendous genetic diversity.” Antibodies created by the immune system to fight off the virus ultimately can’t keep up with the mutations and fail to fight off HIV.

A vaccine for HIV faces the same challenge: it must trigger the creation of antibodies that can fight off all the different variations and subtypes of HIV. It also must have a long-lasting effect.

Vaccines trying to meet these standards are in the works across the globe.

The HIV Vaccine Trials Network, an international collaboration focused on the creation of an HIV vaccine, currently has two other ongoing vaccine trials: HVTN 705 and HVTN 706. HVTN 705 is being tested in Malawi, Mozambique, South Africa, Zambia and Zimbabwe, while HVTN 706 is undergoing tests in Europe and the Americas. The formulas behind the two vaccines vary slightly, but both are designed to induce immune reactions against a variety of HIV strains.

But Feinberg has his eye on the AMP (antibody mediated prevention) Studies, which are also organized by the HIV Vaccine Trials Network. The first results are due later this year.

While traditional vaccine trials give people a vaccine and wait for the human body to naturally produce antibodies against a disease or infection, AMP is giving antibodies directly to participants with IV infusions.

Participants in 11 countries are specifically receiving broadly neutralizing antibodies (BNAs), rare antibodies that form in about 20% of people who are infected with HIV and can block the infection of new cells—no matter the strain of HIV.

“By infusing people with these antibodies, they are hoping they will protect them from acquiring HIV,” Feinberg says. But unlike vaccines, which can offer protection for a number of years, the antibodies would need to be readministered periodically; they would not be a long-term solution.

If successful, however, these studies will show that the broadly neutralizing antibodies can guard against HIV infection — and will also spur scientists toward creating a vaccine that helps the human body naturally generate these antibodies. Feinberg’s own organization is working on one such vaccine now.

Despite the most recent failure, giving up on a HIV vaccine is not an option for both Feinberg and Gray.

“The epidemic is out of control; we need a vaccine,” says Gray. “Just because you fail, you don’t stop trying. You dust yourself off and get up.”

For Gray, that means working to understand why HVTN 702 failed.

But she finds cause for hope in HVTN 702’s nickname Uhambo – which stands for ‘journey’ in the Zulu and Xhosa languages.

“We named it Uhambo,” she says, “because we are on a journey to find an HIV vaccine.”

Nadia Whitehead is a freelance journalist and science writer. Her work has appeared in Science, The Washington Post and NPR. Find her on Twitter @NadiaMacias.