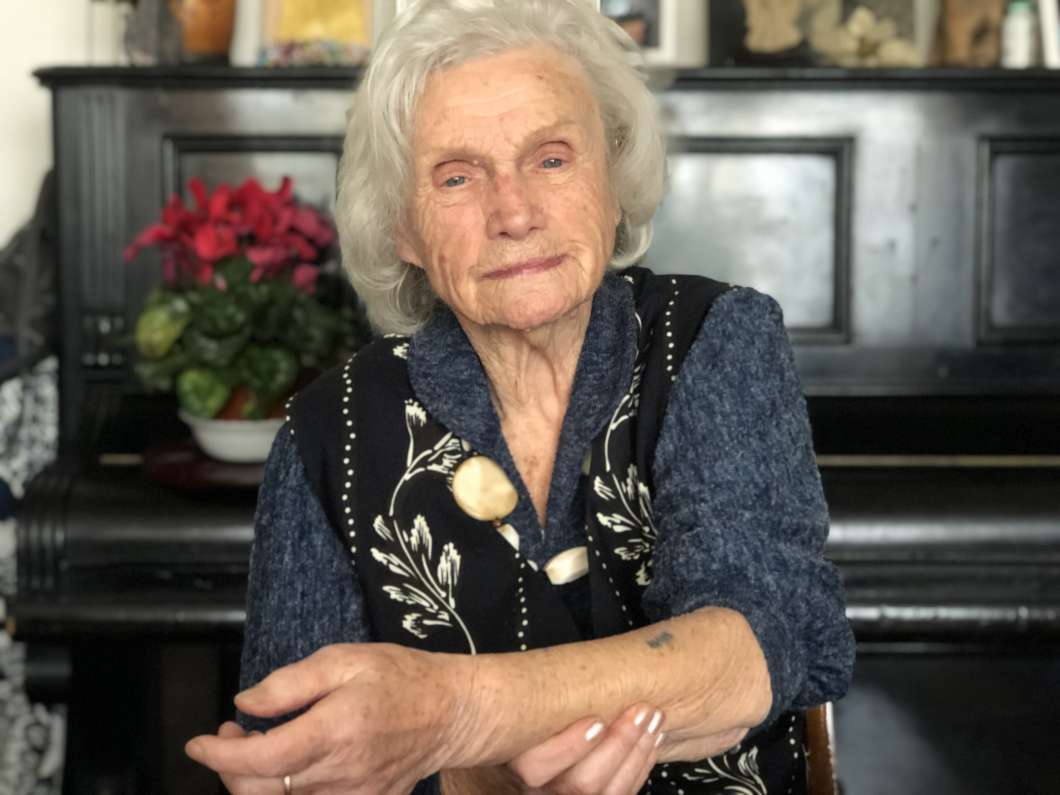 Auschwitz survivor Alina Dabrowska, 96, shows her Auschwitz prisoner number tattoo at her home in Warsaw. She was sent to Auschwitz after she was caught by the Nazis helping the allied forces in German-occupied Poland during World War II.
Image credit: Rob Schmitz

Alina Dabrowska was 20 years old when she first heard about Auschwitz. She was an inmate at a prison in Nazi-occupied Poland — incarcerated for helping Allied forces — and one day in 1943, while walking the grounds, a new arrival warned her about it.

“She said, ‘You’re all going to Auschwitz! Do you know what kind of camp that is?'” Dabrowska recalls. “She told us that if someone is out of strength, they were immediately killed. She told us many horrible things. None of us believed her.”

Of the estimated 1.3 million people sent to Auschwitz, some 1.1 million died at the camp, including 960,000 Jews. It was the largest extermination camp run by Nazi Germany in occupied Poland during World War II. The Soviet Army liberated Auschwitz 75 years ago, on Jan. 27, 1945.

Now 96, Dabrowska is among a handful of Auschwitz survivors still alive. For her, the importance of sharing her stories has only grown with time. She raised a family and had a fulfilling career with Poland’s foreign ministry, but only in recent years decided to speak publicly about the memories of Auschwitz that still haunt her. She and other survivors fear the world will forget the Holocaust’s horrors if their stories are not made public.

When German soldiers first imprisoned Dabrowska, they executed her accomplices, including her brother. She spent a year in prison, and then the Nazis transferred her in June 1943 to Auschwitz.

“When we got off the train, we were taken to a large hall, where we stripped down completely,” she remembers. “Our hair was shaved and they tattooed numbers on our arms.”

She rolls up her sleeve to show hers: a small, faded black “44165” etched into her forearm. Dabrowska remembers the next morning, taking stock of the camp, beginning to realize what she’d heard about it was true.

“I noticed an electric fence around the camp,” she recalls. “Whenever we came back from working in the mornings, there was usually someone glued to it. If someone couldn’t take it anymore, they jumped over the ditch and threw themselves onto the electric fence and their lives were over.”

A year later, she says, she had had enough of the cold, the hunger and the death surrounding her. She too found herself in front of the fence. She was about to jump when a guard yelled at her. She instinctively turned around and never tried it again.

“I focused on doing whatever I could to survive,” Dabrowska says. “I had hope, but sometimes an officer with a cane selected some of us to go to the gas chamber. What left the deepest impression on me was watching those marches to the chambers where so many were murdered.”

Some 865,000 Jews were sent to their deaths in the gas chambers upon arrival at the camp. Dabrowska remembers the horror of noticing a friend’s body among a pile of bodies of the executed. “I saw her lying in that pile of naked bodies,” she says, “and I approached. There she was, just lying there. I grasped her cold hand, and that’s how I said goodbye to my friend.”

Another Auschwitz survivor, Janina Iwanska, now 89 and living in Warsaw, was deported to the camp at the height of the killing in 1944. In an eight-week period between May and July, guards killed 330,000 people.

She was 14 years old. She had been separated from her parents during the Warsaw Uprising against Nazi forces and arrived at Auschwitz alone, packed among hundreds of strangers in a train car.

“We were taken off the train at night, and the air was thick with smoke that smelled like burning hair,” remembers Iwanska. “We walked through a forest and I asked a prisoner, ‘What are those bonfires?’ and she said, ‘You’ll find out, child.’ It was only later that I learned they were burning bodies because they couldn’t keep up with the crematoriums alone.”

Iwanska, who is Roman Catholic, slept in the children’s dorm, and she quickly made herself useful by taking care of the younger children at the camp. This, and the fact that she isn’t Jewish, were the reasons she believes she survived.

Today, Auschwitz is a museum commemorating the evil humans are capable of inflicting on each other. Tour groups quietly shuffle from an exhibit holding two tons of hair shaved from the victims of the gas chambers to the gallows where the former commandant of Auschwitz was hanged after he was tried by a military tribunal in 1947.

Pawel Sawicki, a guide at the museum, has seen thousands of tourists come from all over the world. “Sometimes I think that when they leave a candle or a stone or they put the flower or they say a prayer and they leave the memorial, and they go back to their lives, they think: ‘Our job is done. We remembered,'” he says. “But I think there should be a next step. People should look at this place and think about our moral responsibility. This is not an anthropological discovery of ‘Oh, people 75 years ago were able to do something like this,’ and we are surprised. They [still] are able to do it. They did it before. And people still hate each other.”

Each December, Piotr M.A. Cywinski, the Polish director of the Auschwitz museum, sends a holiday card with a similar reminder. This year, the card, with a message wishing a peaceful holiday season, included a photograph of Chinese soldiers marching past Uighur children in Xinjiang, where China’s government has sent an estimated 1 million ethnic Muslims to internment camps.

But talking about the lessons of Auschwitz can be painful, especially for those who lived through it.

“We did not talk about it at home,” Fabian says. “The Holocaust was never a topic, as I remember it.”

It was only when he was required to sign up for German military service that he says he began to realize what his grandmother had been through. Fabian’s mother gave him an envelope to hand-deliver to the German officers in charge of registering him. Inside were his grandmother’s liberation papers from Auschwitz.

After the German officers saw the documents, they exempted Fabian from service. From then on, he says, he began to think in earnest about what Germany had done to Jews during the war.

“When I lived in the United States, I realized that the Holocaust is a very big part of Jewish identity in America,” says Fabian. “And that seemed strange to me, because in Germany, it is not.”

Fabian says that doesn’t mean German Jews ignore it — on the contrary, he says, there are reminders everywhere. It’s just that not much is said about it, he says.

Fabian thinks more personal stories should be shared while the few remaining survivors are still alive.

Many of those survivors agree, though it has taken decades for them to want to speak publicly about their experiences. Iwanska now does so during regular visits to Germany.

She tells stories like this one from the end of the war — when she and four friends kept each other from freezing to death while Nazi soldiers transferred them to other camps on a death march.

“We were put into open train cars and we huddled together — standing because there was no room to sit or lie down — to keep warm,” says Iwanska. “When it snowed, we collected it to drink, because they didn’t give us water. We were in such complete solidarity that when one of us fell asleep standing, none of the others would steal the snow that accumulated on her. That snow belonged to her. Thanks to our solidarity, we lived.”

It’s also taken decades for Dabrowska to share her stories of Auschwitz.

“I was seeing my camp friends, but I didn’t want to talk about it,” she says. “I was always hiding the number on my arm, so that I wouldn’t have to talk about it. One time, a Jewish woman recognized me and said, ‘You were there!’ and I answered, ‘No, you have mistaken me for someone else.’ It took 50 years before I made the conscious decision to go to Auschwitz.”

It was only when she returned to the camp for the first time in 2001 that she felt strong enough to share her memories of it.

Like Iwanska, she travels to Germany twice a year to speak to young people about her memories of the camp.

“Those children will grow up one day and they will be the ones deciding about how to rule the world,” she says. “It is important [to talk about it] in order to develop the conviction that war is not a good thing, in order to seek peace and try to talk about it, in order to think that it is us who are responsible for this earth and for passing it on, undamaged, to the next generations.”

Grzegorz Sokol contributed to this report from Warsaw and Austin Davis contributed from Berlin.