7 Miles Beneath The Sea’s Surface: Who Goes There? 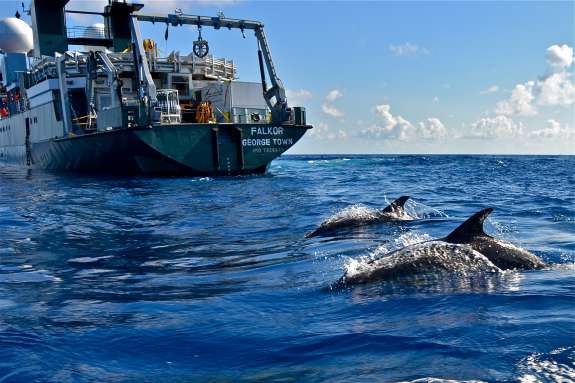 A ship full of marine scientists is floating over the deepest part of the world: the Pacific Ocean’s Mariana Trench. They’re sending down probes to study life in one of the most hostile environments on the planet.

This week the researchers are targeting the two deepest spots in the trench — the Sirena Deep and the Challenger Deep — which each extend down about seven miles beneath the ocean’s surface.

Douglas Bartlett, from the Scripps Institution of Oceanography, is the chief scientist aboard the research vessel Falkor, which is operated by the Schmidt Ocean Institute. Bartlett describes undersea trenches like the Mariana, which stretches hundreds of miles across the floor of the western Pacific, as “inverted islands of biodiversity.”

Only recently, Bartlett says, have scientists been able to study how specialized the organisms are that live at such depths, how abundant they are and what they do.

The team is dropping instrument decks to the bottom, each one about the size of a refrigerator. Designed to float back up on command, each such package of instruments bristles with cameras, water samplers and even traps with bait in them to attract deep-sea animals.

“We use chicken,” Bartlett says, “which can be very dramatic when you see what these scavengers do to chicken. It’s incredible.”

The normal diet for scavengers on the bottom falls like manna from above — the remains of dead sea-creatures drifting down like snow.

Among the bottom-dwellers are shrimp-like crawlers called amphipods. Bartlett says they look tasty, “but when you cut one open … there’s nothing there, just guts and organs and very, very little muscle.”

The team’s deep sea probes are also collecting microorganisms, mud and seawater. Two huge plates of the Earth’s crust meet in this trench, and scientists suspect that some forms of life there may draw energy from chemicals that seep up from within the Earth.

The probes also have enabled the first-ever audio analysis of what the bottom of the trench sounds like. David Barclay from Canada’s Dalhousie University, says it’s pretty quiet down there, as you might imagine, though he think’s they’ve already detected the rumble of a distant earthquake.

“One of the main goals of this cruise,” Barclay says, “is to figure out [if] we hear any biological noise from the things that are presumably eating at the baited traps.”

The team has about a week at sea to capture those sounds and any others.