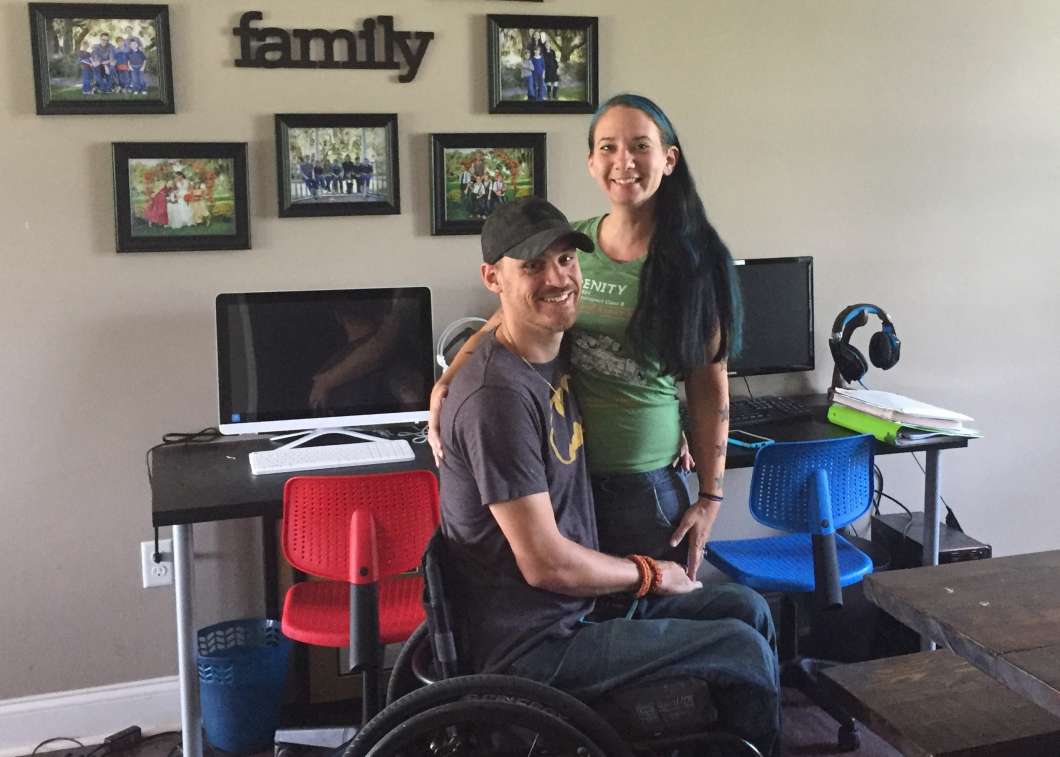 Adam and Crystal Pierce say they'd save more than $4,000 in annual property taxes on their Lake County home if Amendment 3 passes

Florida voters will decide in November on property-tax breaks for disabled police and firefighters, and for low-income seniors. They’re on the ballot as Amendments 3 and 5.

“It was a high crime, high drug area,” he recalled.

At age 25, Pierce was already a six-year veteran of the force. He enjoyed the work. One Monday, he caught a drug dealer in the act, and the suspect tried to flee. Another deputy shot the suspect with a Taser in the right arm.

“As fate would have it, he was left-handed,” Pierce said, “and he had a gun in his left pocket, and we didn’t know it. He was lying on the ground, and he started to get up like he was going to run, so I ran towards him to tackle him, basically, and he pulled out the gun and he turned around and fired twice.”

The first bullet hit Pierce in the top of his head. The second tore through his neck and lungs before shattering one of his vertebrae.

A decade later, he remains paralyzed from the waist down, with nerve damage shooting intense pain throughout his body.

When that pain became too much to work recently, he retired from the Sheriff’s Office Forensics Unit. He gets disability payments, but his family is on a tight budget.

If voters pass Amendment 3, the property tax bill on Pierce’s home would disappear. That would save him roughly $4,200 a year, he says. The exemption would apply to all first responders who are “permanently and totally disabled” in the line of duty.

Pierce and his wife, Crystal, know exactly how they’d spend the extra money: on food for their seven children. He says they spend $1,200 a month to keep the family fed.

Rep. Larry Metz (R-Groveland) sponsored the bill that got the Amendment 3 exemption on the ballot.

“That would put first responders in that category in the same treatment as U.S. military veterans who are disabled from a wartime disability,” Metz said.

A disabled cop in his district, Raul Perez, contacted him with the idea. It passed the Legislature unanimously.

“I think that’s a great example of the process working just the way it was intended to work,” Metz said.

It’s not clear how many first responders will qualify for the exemption because the Legislature would have to clarify the definition of “permanently and totally disabled.”

In Jacksonville’s Duval County, Property Appraiser Jerry Holland estimates 50 police and firefighters would be in that special exempt group.

“They’re getting a freer ride than those who may not get any exemption at all,” he said.

He estimates the Amendment 3 exemption could take away $125,000 from his county, school district, and other taxing bodies. He calls that an “insignificant” amount — but on the other hand, he says, it’s on top of many tax breaks already on the books.

Another proposal on the November ballot would expand one of those breaks. Low-income seniors can already be exempted from property tax if they live in the same home for 25 years. Under Amendment 5, local governments could let them keep their exemption even if their home’s value rises above the current threshold of $250,000.

Holland says cities and counties can start to feel the squeeze as the exemptions add up.

“They have to say, ‘OK, do I spend as much money in this area of arts and parks and this over here?’ Or maybe eventually all these exemptions become straws on the camel’s back,” he said, and local governments might decide to raise taxes.

Legislative analysts say it’s hard to estimate the total statewide cost of both amendments because local governments and state lawmakers would have to take further action before they could take effect.

Read the full text of Amendments 3 and 5, as well as all amendments on the Florida ballot, here.