6 Takeaways From The 6th Democratic Debate 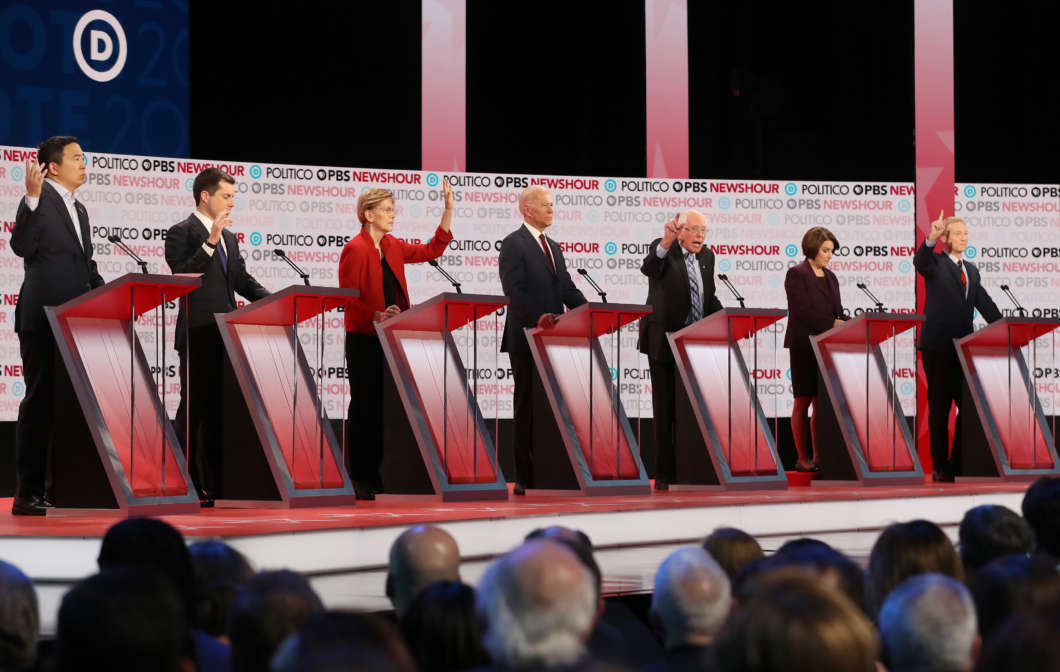 The impeachment of President Trump has dominated the news this week. But the political focus shifted to the Democratic presidential candidates Thursday night for their sixth debate, this one in Los Angeles and hosted by the PBS NewsHour and Politico.

The first subject to come up? Impeachment. But there are no real cleavages between the candidates on that subject. After all, each thinks he shouldn’t be in office. That’s why they’re running against him.

There was a notable moment when former Vice President Joe Biden defended his continued regard for bipartisanship despite him and his family coming under attack from Republicans in the Ukraine saga.

“If anyone has reason to be angry with the Republicans and not want to cooperate, it’s me,” Biden said, adding, “I have no love. But the fact is, we have to be able to get things done. And when we can’t convince them, we go out and beat them like we did in the 2018 election in red states and in purple states.”

Biden was crisper than in most of the other debates, and, unlike those other debates, his steadiness lasted mostly all the way through. He sidestepped a question, about whether he’d run for a second term if elected, given his age — 77. And he was, at times, tougher with his opponents. For example, telling Sen. Bernie Sanders of Vermont to put his hand down while Biden was finishing an answer.

Biden didn’t dominate the debate, and, at times, he faded from view, but that’s something of a win for him. The steadier he is, the fewer of Biden’s supporters — and potential supporters — will be wringing their hands.

It took a while for it to happen, but, as expected, South Bend, Ind., Mayor Pete Buttigieg faced some pointed attacks. Sen. Elizabeth Warren of Massachusetts went after him on fundraising (yes, in a “wine cave”) and Sen. Amy Klobuchar of Minnesota on his experience.

“The mayor just recently had a fundraiser that was held in a wine cave full of crystals and served $900-a-bottle wine,” Warren said. “Think about who comes to that.”

“I have not denigrated your experience as a local official,” Klobuchar said, pointedly contrasting Buttigieg’s municipal job with hers in Congress.

Buttigieg parried the attacks with some skill, especially toward Warren on fundraising. “I am literally the only person on this stage who is not a millionaire or a billionaire,” he said, adding, “This is the problem with issuing purity tests you cannot yourself pass.”

Buttigieg has been surging in Iowa and New Hampshire, and both Warren and Klobuchar see him as an obstacle to their candidacies. He leads with college-educated whites, a group Warren is second with, according to the latest NPR/PBS NewsHour/Marist poll. And for Klobuchar to have a chance at the nomination, she has to do well in Iowa, as she’s from a neighboring state.

3. Money remains a key divide — and potential problem for Democrats

The exchange between Warren and Buttigieg on fundraising highlighted an important split in the Democratic Party — how to raise money.

But it also highlighted another reality — money is important in politics.

And here’s the reality: President Trump doesn’t care where the money comes from, and, so far, is raking in far more than any of the Democratic candidates.

Democrats will have a lot of catching up to do on the fundraising front once a nominee is named. It’s one reason incumbent presidents have such an advantage.

4. Some issues came up that hadn’t and others got attention in different ways

Climate change was a focus earlier than in past debates.

And other topics, which have received little-to-no attention, also came up — everything from trade and China to Muslim Uighurs and Israel and Palestine.

It’s a reminder that there are lots of things a president has to deal with — and often has more control over — than many of the topics that dominate presidential campaigns.

One topic that came up later than usual (10:06 p.m. ET, more than two hours into the debate) was health care. The candidates have debated health care ad nauseum in prior debates, but Thursday night’s had a new wrinkle – whether the candidates calling for big change would be in favor of less sweeping measures if Medicare for All as a replacement for private health insurance failed to pass Congress.

The question was directed to Sanders, and he wouldn’t say. “We’re going to have the American people behind us; we will have the Congress behind us,” Sanders insisted.

Biden said he didn’t think that was “realistic.” And that highlights the real fracture in the Democratic Party primary — the purists versus the pragmatists.

Klobuchar chimed in to defend both Biden and herself. “I think you can be progressive and practical at the same time,” she said, adding that Sanders’ fight wasn’t really with her or Biden, but with new House members from moderate districts and with Andy Beshear, the new Democratic governor of conservative Kentucky, who wants to build on Obamacare.

“If you want to cross a river over some troubled waters,” Klobuchar said, “you build a bridge, you don’t blow one up.”

Notably, the other candidate in favor of Medicare for All stayed silent for most of the exchange. When Warren did speak up, she answered the moderator’s original question and noted some less-sweeping health care measures she supports and believes could pass Congress.

6. Democrats had to deal with a less-diverse stage

With Sen. Kamala Harris of California dropping out of the race and Sen. Cory Booker of New Jersey and former Obama housing secretary Julián Castro not qualifying for the debate, this was not only the smallest number of candidates on a Democratic stage this cycle, it was also the least diverse.

“It’s both an honor and disappointment to be the lone candidate of color on the stage tonight,” entrepreneur Andrew Yang said, adding that while he was called names for being Asian growing up, blacks and Latinos “have something much more powerful working against them than words. They have numbers.”

The other candidates on stage tried to point out, in different ways, their own claims to diversity. Buttigieg noted that he is the son of an immigrant father and at least twice made reference to being gay.

Warren and Klobuchar highlighted, in sometimes humorous ways, that they were the only women on stage. Warren, 70, was asked about the fact that if elected she would be the oldest person to take office as president (a distinction currently held by Trump; Biden and Sanders would be older still).

“I’d also be the youngest woman ever inaugurated,” she quipped.

And Klobuchar said she once pointed out to Trevor Noah of The Daily Show, “in the history of the Senate, there was something like 2,000 men and only 50 women in the whole history.” (The numbers are 1,926 and 56, according to Senate and House historians.)

Noah’s response, Klobuchar said: ” ‘If a nightclub had numbers that bad, they would shut it down.’ ”