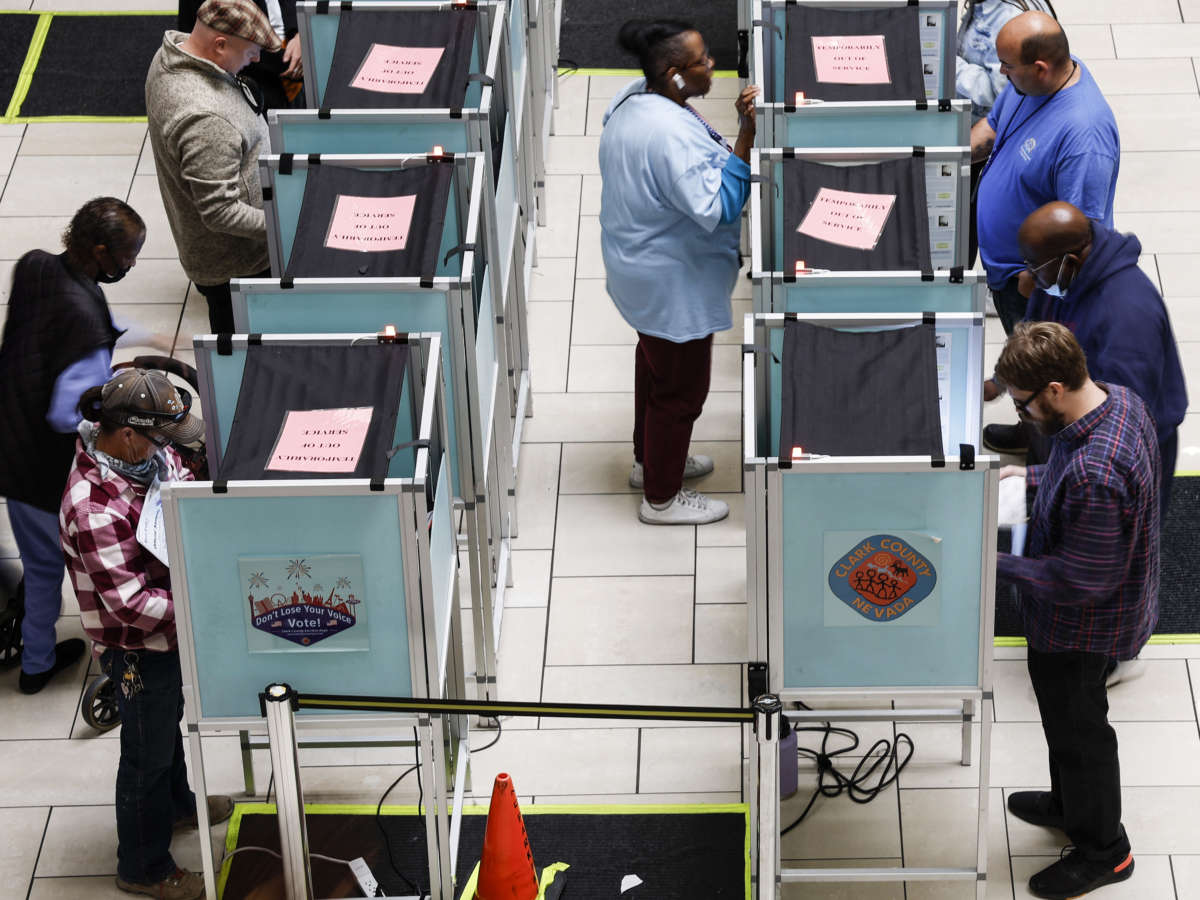 This is why it’s always important to remember never to assume you know exactly what’s going to happen in an election – and to keep an open mind for potential surprises.

We’ve been saying for months these elections were expected to be close, that many of these elections would take a while to be decided, asked whether things had settled into a typical midterm, where the president’s party would suffer major losses, and said to not believe anyone who told you they knew exactly what would happen.

There’s still a lot we don’t know, but one thing we do know is that Republicans did not have the night they were hoping for.

Based on what we do know in the wee hours, let’s dig in with six takeaways:

1. The Senate is undecided, and is going to go on a while

Control of both the House and Senate are still not yet known, as of 5 a.m. ET. Senate races in the key states of Georgia, Arizona, Nevada and Wisconsin are still not called, though incumbent Republican Ron Johnson in Wisconsin led with 98% of votes in.

Democrat John Fetterman won in Pennsylvania, which was seen as a crucial state for Democrats to be able to retain control. It is likely their one flip of the evening, as Wisconsin looks less likely.

That means Republicans now need a net gain of two pickups to gain control. So far, they have gotten none. They were expecting to win up to 52 seats, and that now appears unlikely. Nevada and Georgia are close, but the Republican was ahead in Nevada and the Democrat was ahead in Georgia. Arizona only had about 58% of votes in, and Democrat Mark Kelly was ahead at that point.

In Georgia, Democrat Raphael Warnock was narrowly ahead, but not quite above the 50% threshold needed for an outright victory. So, let’s say if Democrats hold on in Arizona, but lose in Nevada, then Georgia will decide control of the Senate in a runoff in about a month, Dec. 6. Wow.

2. Republicans underperformed in the House, and there’s going to be a lot of finger-pointing

The House still looks like it’s headed for GOP hands, but not by a huge margin. As of 8:30 am ET, Republicans have flipped or are leading in 17 races, while Democrats have flipped or are leading in 10. While votes continue to be tallied, if those results hold, that would only be a net gain of seven seats, on the low end of forecasters’ projections. It’s also far below the average for a president’s first midterm. And it would mean a very narrow governing majority for Republicans.

Since World War II, the party out of power has picked up a net of 28 seats and 43 seats when a president’s approval rating was below 50%, as President Biden’s is today. A Republican net gain of nine would be enough for a majority — they only needed five — but it will also make for lots of Republican hand-wringing.

Republican House leader Kevin McCarthy spoke at almost 2 a.m. ET and tried to set the narrative. “It is clear that we are going to take the House back,” McCarthy said. He pointed to diverse GOP candidates across the country and claimed that it was evidence of an expanding GOP tent. “When you wake up tomorrow we will be in the majority — Nancy Pelosi will be in the minority,” McCarthy added.

Democrats would still be in control of the House until January when the next Congress is sworn in, but Republicans will be in charge in the new year and for at least the next two years. They’ll be able to blunt Biden’s agenda and not much will likely happen in Washington legislatively. And it’s true that Republicans this year did put up a lot of diverse candidates relative to previous election cycles. More Republican women ran for the House and Senate this year than 2020, for example.

But there are questions about the strength of McCarthy’s potential bid to be speaker of the House. He lost out once before on being speaker because of messaging problems, and the exit polls showed McCarthy with a 27% favorable, 53% unfavorable rating. Does he get a renewed challenge as leader of the party in the House?

3. There’s also going to be blame directed at Trump

Former President Donald Trump weighed in heavily in these elections, but even in this landscape, with inflation high, Republican House candidates underperformed (except perhaps in New York State, where Republicans might flip four seats, including Democratic Congressional Campaign Committee Chairperson Sean Patrick Maloney’s seat, which was too close to call at this writing).

Overall, Democrats wound up narrowly winning with independents, according to the exit polls.

We don’t have all the results yet, but the underperformance in the House, and the lackluster performance of Trump-backed candidates in purple states, like celebrity TV doctor Mehmet Oz, who lost to Democrat John Fetterman in Pennsylvania, and Herschel Walker, who is trailing in Georgia, could have a lot of Republicans, especially GOP professionals, wondering if continuing to be wedded to Trumpism is still what’s best for them in purple states.

That’s especially true considering what happened in Florida. Gov. Ron DeSantis was announced the winner for re-election right when polls closed. Republicans have flirted with an alternative to Trump, and the name who continues to be on the tips of Republicans’ lips is DeSantis. At a recent rally, Trump nicknamed DeSantis “Ron DeSanctimonious” while touting a lead in a hypothetical GOP primary poll.

But Trump clearly sees DeSantis as a threat – and on Trump’s mind. It might be why he is again suggesting he will announce for president soon to put a hold on the nomination as soon as possible.

… in other words, a state that used to be a swing state, but now seems firmly in the Republican hands.

DeSantis won early, and shortly after that, so did Sen. Marco Rubio. Both won by impressive, double-digit margins. It wasn’t even close. Let’s be blunt: No Democrat has won an election to be Florida governor now in almost 30 years (since Lawton Chiles in 1994). And Democrats are shut out of statewide office.

Think about that. This is a state Obama won twice and was decided by hanging chads in 2000 and has been thought of as a swing state for 20-plus years.

But political maps, they are a-changin’. And as the sun has risen for Democrats in other parts of the Sun Belt states, in places like Georgia and Arizona, it may be setting for the party in the Sunshine State. Political maps aren’t static – up until 1992, California had gone Republican in every presidential election dating back to 1968.

There’s going to be a conversation ahead of the 2024 presidential election among Democratic strategists and party officials about abandoning Florida – and its 29 electoral votes. It’s such an expensive state – with multiple TV media markets – there will be questions about whether it’s worth even playing there in a presidential election, when they could spend those millions in emerging states.

Despite Democrats’ decent night overall, they struggled again to energize Latino voters, who have been a key portion of their base.

Exit polls showed Democrats won about 60% of Latinos overall, down from 65% in 2020, which was already considered a slip. But remember, Latino voters are not a monolith. Latinos of Cuban and Venezuelan descent have grown far more Republican-leaning, which is likely what helped DeSantis and Rubio to their big wins.

Remarkably, they both won Miami-Dade County by double-digits. It’s a place that used to be a Democratic stronghold. In 2016, Hillary Clinton won the county by 29 points. It shifted more Republican in 2020 with Biden only winning it by 7, and that raised eyebrows about how Democrats were doing with this cross section of Latinos.

In a year Biden won the presidential election, in 2020, Biden also struggled with Latinos in South Texas. Multiple counties shifted toward the GOP. In the Texas gubernatorial race, though, Democrat Beto O’Rourke in his loss to incumbent Republican Greg Abbott, pulled in similar margins as Biden in two of the largest border counties – Hidalgo and Webb.

In Arizona and Nevada, it was also unclear whether there was any discernible change. The exit polls had the margin for Latinos in Arizona down slightly for Democrat Mark Kelly from 2020, but up slightly for Catherine Cortez Masto in Nevada, but those numbers could change as they are weighted to the final results. The book is still out on this, but it’s safe to say that Republicans are making a genuine play for Latinos, they say, on the economy, crime and progressive policies.

Black voters and younger voters appeared to turn out as similar shares of the electorate and margins as in past midterm elections.

6. The cross currents of this election between abortion rights and inflation were real

For months after the Dobbs decision that overturned Roe, it was clear there were cross currents in this election that could make it different than most midterm elections.

And that appears to have turned out to be the case. Abortion popped as an issue in places like Pennsylvania and was slightly higher overall than had been seen in polling leading into Election Day.

And a more concrete data point: There were four abortion-related measures on ballots in four states – and in all four they are in moving in the direction of support for abortion rights. Vermont, Michigan and California all approved legislation that adds the right to an abortion to their state constitutions. In Kentucky, a measure that would have amended its state constitution to say there was no right to an abortion was losing by 7 points.