6 Questions Ahead Of The 1st Trump-Biden Presidential Debate 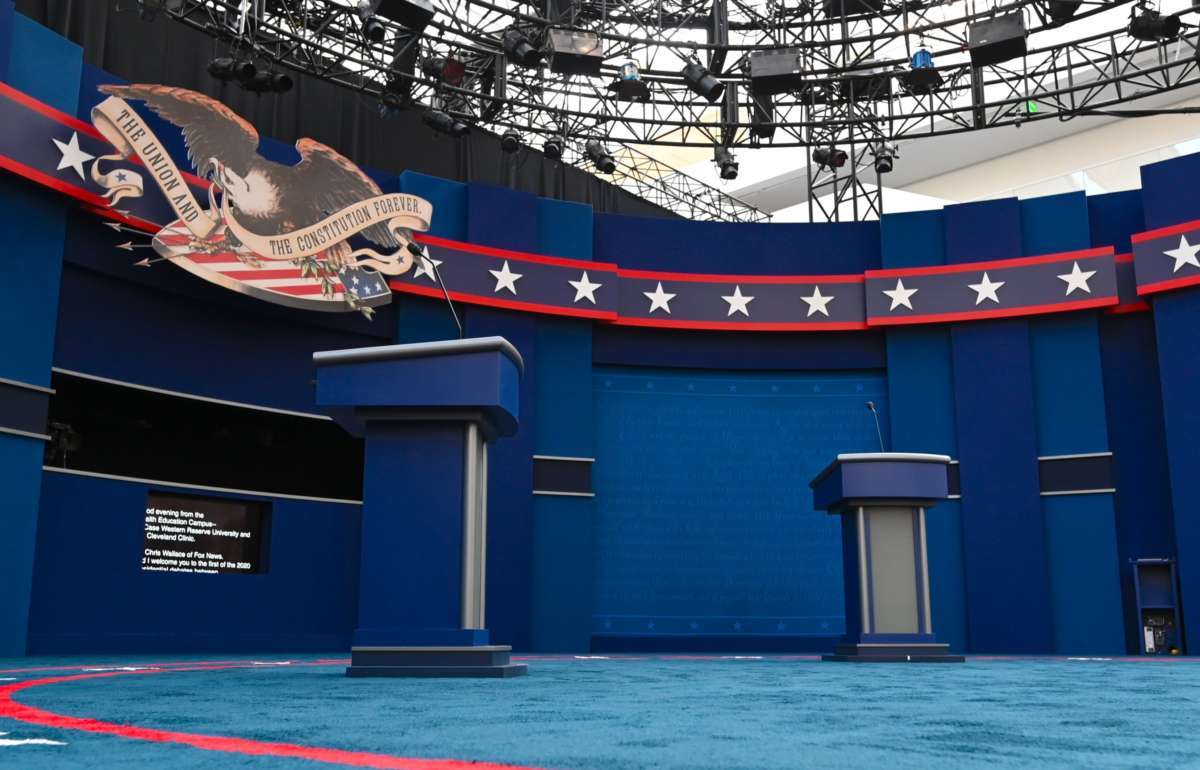 The stage of the first presidential debate, in Cleveland. Tuesday's debate between President Trump and Democratic nominee Joe Biden will be the first of three 90-minute debates between the two.
Image credit: Eric Baradat

The debate is high stakes and carries risks for both candidates.

Here are six questions ahead of the debate, to be moderated by Fox News Sunday host Chris Wallace beginning at 9 p.m. ET and held at Case Western Reserve University in Cleveland.

Presidents up for reelection often struggle in their first debates. It happened to Barack Obama, both Bushes, Ronald Reagan and Jimmy Carter. Some recovered; some didn’t.

“What happens with an incumbent president is they spend four years in office being deferred to and agreed with,” said Alan Schroeder, author of Presidential Debates: Fifty Years of High-Risk TV. “It’s difficult for staff to challenge a sitting president directly, so by the time they get up on the debate stage, they’re not used to being spoken to forcefully and directly and being criticized. They’re also by definition out of practice.”

Trump, of course, defies the odds, breaks the rules and seems constantly embattled, so maybe it won’t matter. An NBC report this month indicated that Trump didn’t appear to be taking debate prep seriously or holding mock sessions at all. But another from the Washington Post on Friday shows Trump is preparing blistering, personal attacks against Biden.

How Trump holds up in a serious, 90-minute debate after being president for almost four years with a record to defend — and not being the outsider throwing rocks — is a real wild card.

2. Does Biden come across competently?

It’s no secret that Trump and his campaign have been trying to paint Biden as incompetent, over the hill and not all there. But there’s tremendous risk in this approach for Trump, because he and his allies have considerably lowered the bar for Biden.

“The people who just want to get rid of Trump will be satisfied if Biden shows up, if he doesn’t collapse in the middle of the debate, and whatever he says, even if it’s erroneous or a gaffe — like 200 million [who have died from the coronavirus] — they’ll dismiss that, and people will just give him a pass,” said Mary Frances Berry, a historian at the University of Pennsylvania. “He has to be what he called Obama — he has to be clean and articulate, but doesn’t even need to be articulate, just clean.”

It has been more than a year since the first Democratic primary debate, when people were asking this same question. Let’s face it: Biden is 77 and would be 78 at the time he would be sworn in as president. He’s not the same debater and public speaker he was a decade ago. But while he had some spotty primary debates, he had good ones too. And certainly, Biden has come across competently in his public appearances during the general election campaign, including importantly his Democratic National Convention speech and a recent CNN town hall.

3. Can Trump and Biden control their tempers and tone?

There’s a high likelihood this will become a very aggressive debate with Biden trying to indict Trump’s record, and who knows what Trump will pull out.

Both have a tendency to come off as angry, and sometimes a debate is more about tone than substance because it indicates control and likeability. That might not matter at all with two candidates as well known as both of these candidates, but losing their cool can play into negative narratives of both.

“Trump is Trump,” Schroeder said. “There’s never a great deal of variation in how he presents himself, whether it’s White House press conferences, debates or a rally, so what he is is what he is. I don’t think he’ll modulate his performance in any way for the debate.”

Schroeder added, though, that it will be interesting to see whether Trump and Biden can control their tempers and whether either takes the ample bait that the other will lay out for him.

4. How does Trump defend his record?

From the coronavirus pandemic and race relations to replacing Ruth Bader Ginsburg at the Supreme Court and Trump’s tax returns, these 90 minutes might fly by. Trump certainly has his back against the wall and needs to defend his record and expand his appeal to the middle of the electorate.

So far, Trump continues to be down in the polls, averaging just 43% nationally. He received 46% in 2016 and lost the popular vote by 3 million votes. It’s possible with how the Electoral College votes are allocated that Trump wins again but loses the popular vote by even more, but from Team Trump’s perspective, that’s not a great place to start from.

Part of why he hasn’t been able to expand his appeal is because independents and suburban voters, both groups he won last time, have disagreed with him on most issues since he took office. And they overwhelmingly disapprove of the job he’s doing handling the coronavirus pandemic. So how does Trump address the substance of those concerns that voters have about his management, aside from calling it the “China Virus” and simply claiming he’s done a great job?

5. How does Biden respond to personal attacks?

Trump needs to make Biden an unacceptable choice rather than letting this election continue to be a referendum on him. One way Trump is likely to try to do that — and pivot from his own record — is to go after Biden’s son, Hunter.

Who knows what’s up Trump’s sleeve? Remember, this is the same person who brought to a debate women who accused Bill Clinton of sexual misconduct and tried to seat them in Hillary Clinton’s line of view. How Biden responds is going to be important. The fact is this: Biden has the issues on his side. His issue positions on most things line up far more with the middle of the electorate than Trump’s positions, so Biden might try to sidestep and stay focused on issues important to the country.

But Trump has a unique way of controlling events. Whether Biden can wrest some control could be key.

6. How does the moderator control the stage?

Speaking of control, there’s probably no one better suited to moderate this particular debate than Fox News Sunday‘s Chris Wallace. Wallace is incisive, a tough questioner and prepared, as evidenced by his interview with Trump in July.

Debates can go very far south when a moderator isn’t in control. How and how much will he fact-check both candidates, Trump in particular, given that he can be so combative and is fine with running with things that aren’t true? How will Trump respond to Wallace pushing back?

“Trump has to watch out for Wallace pouncing on him,” Berry said. “If that happens and Trump is off balance, he may lose support with people who are on the fence.”

And how does Biden respond if he’s pushed too? Biden’s ability to give-and-take will go to the question of his competence as well, but Biden spent half a century steeped in policy, unlike Trump.