6 Political Takeaways For President Biden From The Chaotic Afghanistan Withdrawal 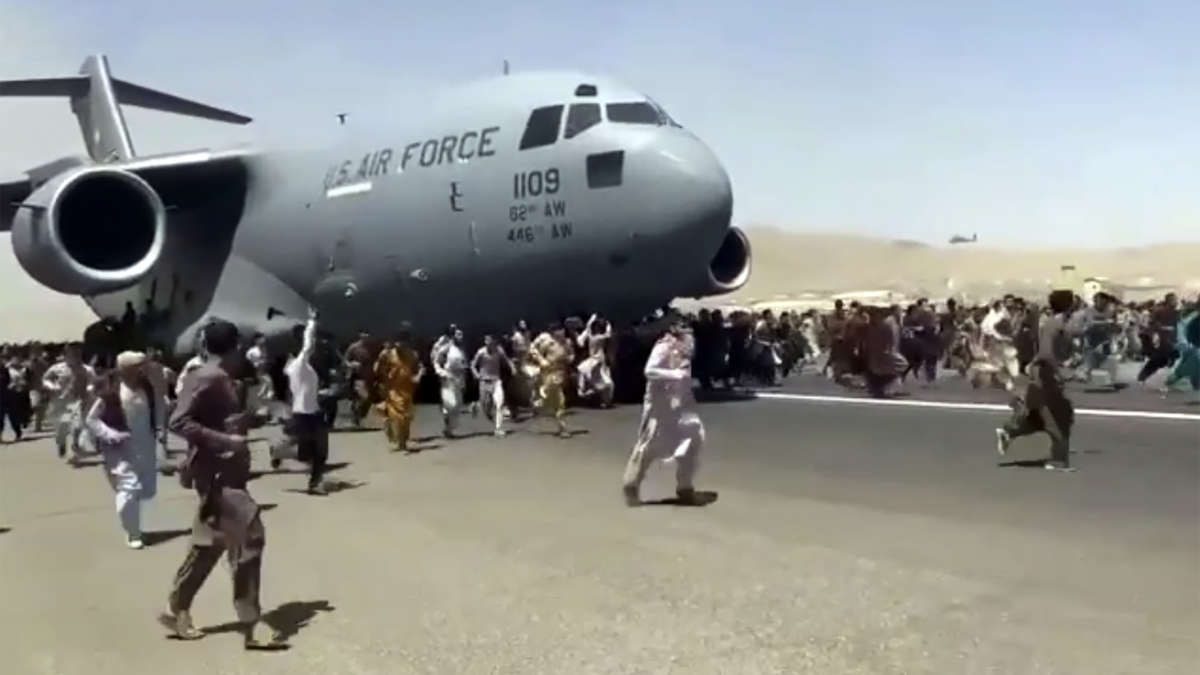 People run alongside a U.S. Air Force C-17 transport plane as it moves down a runway of the Kabul airport on Monday.

If there’s one thing an American president doesn’t want to see, it’s the kind of pictures that have played out on cable news of the chaos in Kabul — crowded runways of people desperate to get out, with some hanging from the outsides of U.S. cargo planes and, for those lucky enough to get in, crammed on the floor.

There are humanitarian concerns facing the Afghan people. But the disorganization and confusion of President Biden’s full U.S. military withdrawal of Afghanistan have also put him in a political hole. After doing what three presidents before him didn’t — or wouldn’t — do even if they advocated for it, Biden is facing a bipartisan backlash.

On Monday, he took a degree of responsibility, saying the buck stops with him, but he mostly blamed Afghan leaders and forces and defended the larger policy direction.

“American troops cannot and should not be fighting in a war and dying in a war that Afghan forces are not willing to fight for themselves,” Biden said in remarks, noting the $1 trillion and nearly 20 years the U.S. has spent there since the 9/11 attacks.

Here are six takeaways on what the withdrawal might mean for Biden:

If there was one thing Biden ran on in 2020 against President Donald Trump, it was the idea that he knows how to govern competently. It was an underpinning of what his presidency was supposed to stand for — as the antithesis of Trump.

What’s happened in Afghanistan over the past week — with troops being sent back in to help with the evacuation — is a gut punch to that narrative, even if in the long run the policy direction winds up being one Americans agree with.

Those assurances all turned out to be wrong. And it’s not the first time this has happened during Biden’s presidency. Speaking on July Fourth, Biden warned about the delta variant, but also declared that the U.S. was moving toward “independence” from the coronavirus. Then delta drove this latest surge.

It’s a lesson that Biden should have learned in his decades in Washington, D.C. — it’s never a good idea for a president to make predictions he has no control over.

Arguably, had Biden been more measured in his assessment of the withdrawal, the political backlash might not be so swift.

3. Biden is reflecting a new consensus of America turning inward

America’s post-World War II role in the world was defined by an alliance with Western democracies and a Cold War against Russia. But since the fall of the Iron Curtain and 9/11, the U.S. role in the world has been less well-defined.

After years of war, economic turmoil and a pandemic, America appears ready to turn inward with more of a focus on domestic problems.

Biden’s foreign policy doctrine is not quite Trump’s “America First.” He’s reengaged with traditional U.S. allies and wants to know and be respected by world leaders. But he is turning his focus far more to domestic policy and pulled back internationally than did the Biden who was chair of the Senate Foreign Relations Committee.

4. Despite the negative coverage, it appears that Americans still don’t want to stay in Afghanistan

To the point of turning inward, Americans have long seen the war in Afghanistan as unpopular.

A snap poll of the events unfolding over the weekend found that while support for the full withdrawal declined dramatically, a plurality — about half — still wanted out and not much more than a third of Americans want to stay. Other surveys have previously found Americans feel little obligation to the people or government of Afghanistan or to ensuring democracy there.

Expect feelings on Afghanistan to get somewhat more partisan, considering the attention it’s getting. It will be interesting to see how those numbers settle in the next few weeks and months.

5. The real test for Biden is whether terrorist groups are able to reconstitute and attack Americans

Biden noted that counterterrorism, not nation building, should be the U.S. focus, especially considering the original mission in Afghanistan after 9/11.

Given the history of the Taliban giving cover to al-Qaida and now without a U.S. military presence, this is going to be the test of success (or failure) for Biden as it relates to his Afghanistan policy. And how might what’s transpired over the past week mean for how other bad actors test Biden?

The Afghanistan withdrawal is just one more issue mounted on the plate of attacks against Biden and Democrats. Even before this, history and redistricting were on Republicans’ side, and Republicans and Democrats are starting to paint a picture of a likely Republican takeover of the House in 2022.

That means, as the fog of what happened this week in Afghanistan starts to clear and eyes move again toward the Democrats’ domestic agenda, the multitrillion-dollar spending deals will likely gain more urgency, because they may be the last things Democrats are able to get done before the next presidential election.