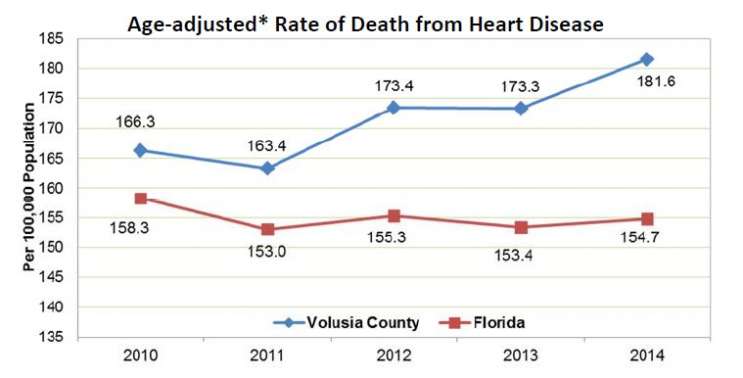 While death rates from heart disease declined in Florida during the last five years, Volusia County saw a 9 percent increase in deaths.

The report from the Florida Department of Health in Volusia County looks at different zip codes in Volusia, comparing them to the state. The findings include:

Thomas Bryant III, director of the Office of Informatics and Assessment for the Volusia County health department, said they do the analysis to know where the county should focus prevention efforts.

“So again, it forces us to look at our populations we serve and say OK, what’s going on,” Bryant said. “Why these groups? Why this area?”

The main risk factors for heart diseases are high blood pressure, high cholesterol and smoking. The county will also look at environmental triggers, like access to a healthy diet.

There are also racial disparities in the figures. Hispanic residents in Volusia County had the lowest death rates from heart disease.

“When we look at all the quadrants, African Americans tend to be higher – with the exception of the southwest quadrant, where the numbers are much lower than the state and lower than most other racial and ethnic groups in that quadrant,” Bryant said.

Check here for other reports from Volusia County.