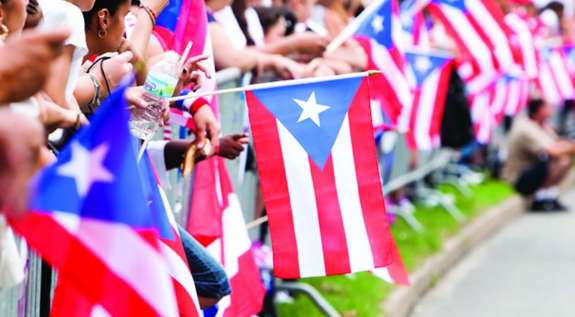 In a small, crowded shopping plaza, the smell of mofongos drifts from Melao, a popular Puerto Rican bakery. A few doors down people eat plantains at Puerto Chino a Puerto Rican-style Chinese spot. Others buy books at libreria cristiana, a Spanish bookstore.

This is Buenaventura Lakes, part of Kissimmee St. Cloud, where Spanish is the new lingua franca and Puerto Rican flags propped in windows is now a common sight.

Janet Colon remembers less than ten years ago when the area was different.

“The environment was only white people,” she says. “There was nobody there that speaks Spanish. And now there’s Spanish people there that they can help you out. So now, when you go there, it has changed.”

Census data from 2013 show just over 900,000 Puerto Ricans living in Florida, and that number has since risen. The majority of them have settled in Orange and Osceola counties. But Colon expects that to change as Puerto Ricans outgrow Kissimmee and Orlando.

“They’re moving from county to county,” she says.

Colon came to Central Florida during the last wave of Puerto Rican migration twenty years ago. That’s around the time Julio Huert decided to move here from New Jersey. The 85-year-old left Puerto Rico at 17 years old for better opportunities. He says that is why others are coming.

“Moving here in Central Florida because Disney, Sea World, so they go looking for jobs in there. Plenty of jobs in there. You don’t make that much, but it’s a hot place…pretty comfortable place.”

Today, taxes on imports have raised the cost of living on the island. Electricity and water cuts complicate routine life. Residents who cannot afford to stay are buying one-way tickets here.

“They sit here and tell me stories,” says Jeanette Agosto. She works at a clothing store in Buenaventura Lakes. In the past month, she has met over a dozen new arrivals. Some are poor, others are not.

“They have careers in Puerto Rico. Some of these people are teachers. They worked in hospitals or whatever the case may be.”

But not all of Central Florida’s Puerto Ricans are coming directly from the island. Some move here from New York, Illinois, or California, like Jimmy Torres. He goes to Puerto Rico every month to see his wife and kids.

Torres heads Initiativa Accion Puertoricannia, a non profit that advocates for wage fairness, maternity leave, and overtime benefits for Puerto Ricans in Central Florida. He says Puerto Rican from other cities come here because they can keep benefits they would otherwise lose in Puerto Rico.

With Puerto Ricans now the largest Latino group in Orange and Osceola Counties, Torres’ vision in the next ten years is for Central Florida to see a Puerto Rican mayor and police chief.

“We’re going to have what the Cuban community have in Miami,” he adds. “What we want is what the brothers and sisters from Mexico have; what the African Americans have in Georgia and other places.”

Back at the Spanish bookstore at Buenaventura Lakes shopping plaza, Janet Colon is resolving to stay in Florida, even though her father and sister still live in Puerto Rico.

“Me, myself, I won’t go back to Puerto Rico. I won’t move there,” she says. “Living in there is not easy unless you have money or unless you have a career like a doctor or something like that. But if you are just a low-income family, you’re just going to be struggling.”

She worries about home but has resolved to find comfort in her life in Central Florida, joined by others like her.