5 Takeaways From The 1st Democratic Debate 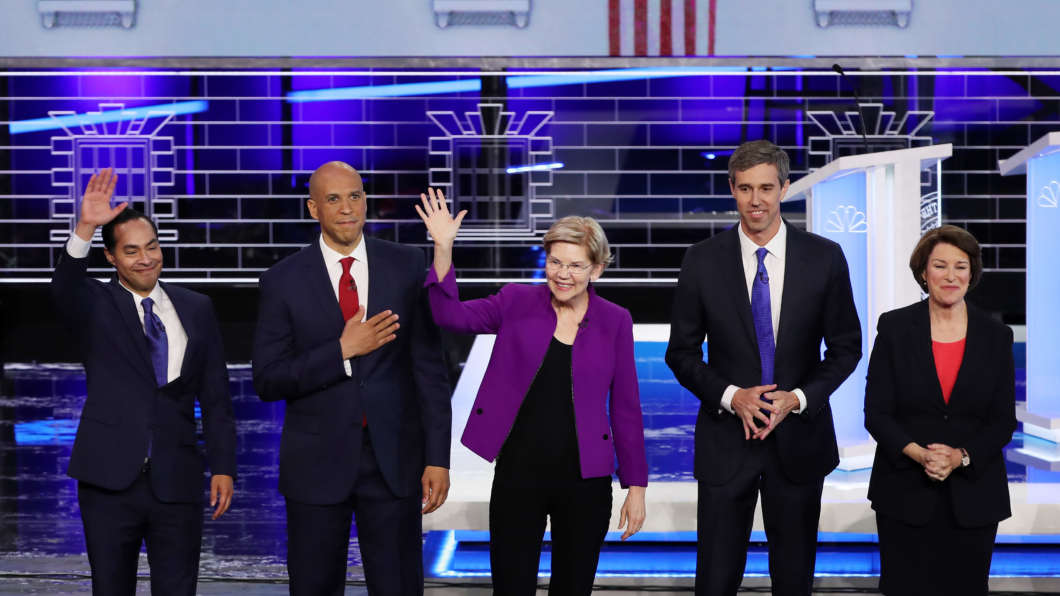 If the overarching question heading into the first debate of the 2020 presidential primary for Democratic voters was “Who can you see as president up there?” it’s not certain they got a clear answer.

Rather than fireworks — toward each other or President Trump — the candidates took a cautious approach. Will that be the approach on Night 2, Thursday night, with Vermont Sen. Bernie Sanders and former Vice President Joe Biden on the same stage?

Of all the candidates, the Massachusetts senator came in as the biggest star and, because of that, probably had the most pressure on her. But she was consistent, sticking to policy and her vision for the United States.

The impression she made with her answer to the first question set the tone. She was asked a fastball down the middle about whether her succession of big policy proposals would be too much change for the country, and she went to her bread-and-butter response: that a “thinner and thinner slice” of the country is getting ahead and that this needs to change. That’s a home run for what she’s trying to do with her candidacy.

We will see, though, if going out on the plank to say that she supports eliminating private health insurance comes back to haunt her if she gets the nomination. It was remarkable that she and New York Mayor Bill de Blasio were the only ones to raise their hands to say they did.

2. The gloves stayed on — and the shape of the race stays the same.

The moderators tried with the first two questions to stir up a fight between the progressive and pragmatic wings of the Democratic Party, calling on Warren and then shifting to Minnesota Sen. Amy Klobuchar on whether the field was going too far. But Klobuchar didn’t take the bait.

“I had to sit back and say, ‘This is the first debate,’ ” Klobuchar said afterward on MSNBC, pointing out that she would have liked to have talked more about Russia and farm policy.

That meant the shape of the race did not change. It’s a reminder that it’s early, and until the lines become more sharply defined, the candidates may hold back, although the dynamics for Thursday night’s debate may be different.

3. They didn’t take the fight to Trump.

It is remarkable that the candidates had relatively little to say about President Trump. It was almost as if he didn’t exist — and the candidates cared more about Republican Senate leader Mitch McConnell.

But Trump is running for reelection — and reelection campaigns almost always come down to referendums on sitting presidents and their policies. None of the candidates really made the case as to why they are best equipped to take the fight to Trump. That’s especially glaring given that Democratic voters are saying that what matters most to them is electability and that what they want more than anything is to beat Trump.

Even Trump was unperturbed by the debate, dismissing it as boring, and he reserved his biggest criticism for NBC’s technical difficulties.

4. Beto O’Rourke did not help his cause.

Warren needed to be consistent, and she was. Klobuchar is still in the conversation and had a couple of good moments. But former Rep. Beto O’Rourke shared the middle of the stage with Warren; he needed a good debate, but struggled at times.

He often looked overshadowed, and his lack of policy specifics was glaring, especially standing next to Warren. It was that way right from the start when the moderator asked him whether he supports a marginal tax rate of 70% on high-income earners making $10 million a year or more. He deflected and started speaking in Spanish three sentences later.

Later, O’Rourke had a hard time defending himself on immigration policy against his fellow Texan, Julián Castro, who had a strong debate, speaking for marginalized people and communities. It’s always especially damning when a candidate plays into a narrative of them that’s already out there — and for O’Rourke, that rap is that he’s light on policy specifics.

Will Trump be more of a factor? Do the gloves come off against Biden? Does Harris break out finally? Is Buttigieg able to handle the scrutiny after the police shooting in South Bend that sidelined him from the campaign? Will foreign policy be more of an issue for this group of candidates? Will there be any surprising moments?

If Democrats watching at home weren’t thrilled with their choices onstage Wednesday night, they’ll have another crop of 10 to pick from Thursday.