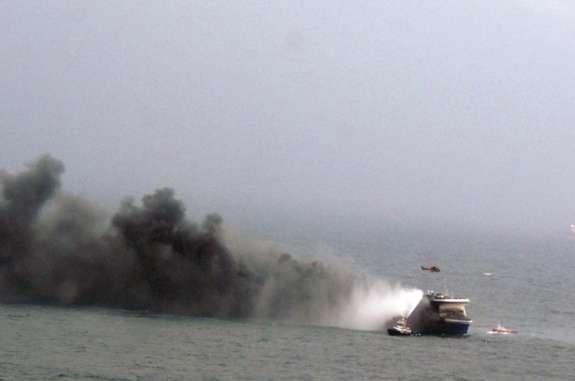 In this image provided by the Italian Navy, smoke billows from the Italian-flagged Norman Atlantic after it caught fire in the Adriatic Sea on Sunday.
Image credit: Uncredited

Greek authorities say five people have now been found dead aboard a burning ferry off the coast of Greece.

The AP reports that 391 passengers have been rescued, but as many as 87 are still on board.

Video from a rescue helicopter showed a harrowing scene: A huge black plume of smoke billowed from the vessel, as stranded passengers waited to be rescued on the deck of the ship.

“The fire broke out on a car deck on board the Norman Atlantic before dawn Sunday as it sailed from Greece toward Italy.

“Earlier Monday, a group of 49 exhausted people arrived at the Italian port of Bari Monday after they were rescued from a Greek ferry that caught fire in the Adriatic Sea. …

“At least one person was killed in the precarious rescue operation and two others were injured as Italian and Greek ships and helicopters worked through the night plucking passengers off the stricken vessel and bringing them to safety aboard the 10 or so mercantile boats nearby that were summoned to help.”

“Helicopters redoubled their efforts after a navy ship with a helipad reached the ferry on Sunday evening. Another naval vessel was heading to the scene on Monday. An Italian Coast Guard official, Giovanni de Tullio, said on Italian television that stormy weather had been forecast.”