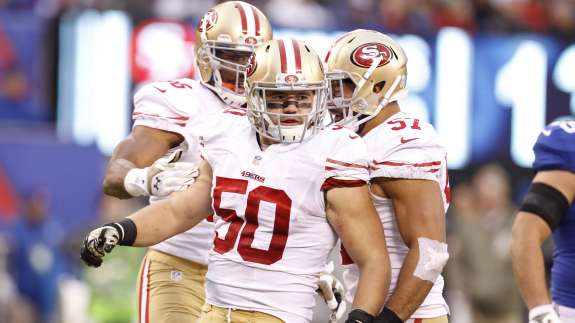 San Francisco 49ers linebacker Chris Borland (50) is seen here in a game last year against the New York Giants. Borland, who had two interceptions in that game, has announced that he is retiring from the NFL after his rookie season.
Image credit: Chris Szagola

Concerns about possibly incurring brain injuries have prompted Chris Borland to end his NFL career after a rookie in which he emerged as a star on the San Francisco 49ers’ vaunted defense. Borland, 24, said, “I just honestly want to do what’s best for my health.”

Saying that he had consulted with other players, medical experts and his family, Borland stated, “From what I’ve researched and what I’ve experienced, I don’t think it’s worth the risk.”

He added, “I feel largely the same, as sharp as I’ve ever been. For me, it’s wanting to be proactive. … I’m concerned that if you wait till you have symptoms, it’s too late.”

Borland worked his way into the 49ers’ starting lineup last season after Pro Bowl linebacker Patrick Willis was sidelined by a persistent toe injury. Borland blossomed in the role, leading the team in tackles. But in announcing his decision to retire on ESPN’s Outside the Lines program, he decided the potential for a lasting injury was too great.

“I’ve thought about what I could accomplish in football,” he said, adding, “to be the type of player I want to be in football, I think I’d have to take on some risks that, as a person, I don’t want to take on.”

Borland, who is listed as being 5 feet 11 inches tall and weighing 248 pounds, was drafted by the 49ers in the third round out of Wisconsin. He says he hasn’t been diagnosed with a concussion in the NFL, but that he did sustain two previously: one while playing soccer in the eighth grade and another playing football in high school.

In recent years, brain trauma from concussions has become an ongoing concern in pro football. Such injuries were at the center of a landmark $765 million settlement between the NFL and more than 4,500 players that was announced in 2013.

Also in 2013, the book League of Denial gave new details about the scope and effects of chronic traumatic encephalopathy, or CTE, a disease linked to repeated head trauma. Autopsies have shown dozens of former NFL players suffered from the condition.

The 49ers say that although Borland’s news comes as a surprise, they accept and respect his decision.

“From speaking with Chris, it was evident that he had put a great deal of thought into this decision,” said 49ers general manager Trent Baalke. “He was a consummate professional from day one and a very well respected member of our team and community. Chris is a determined young man that overcame long odds in his journey to the NFL and we are confident he will use the same approach to become very successful in his future endeavors. We will always consider him a 49er and wish him all the best.”

Borland’s exit is the latest in a series of changes for the 49ers. The player he replaced last season, Patrick Willis, announced his retirement last week at age 30. And in December, the team parted ways with head coach Jim Harbaugh, who is now at the University of Michigan.