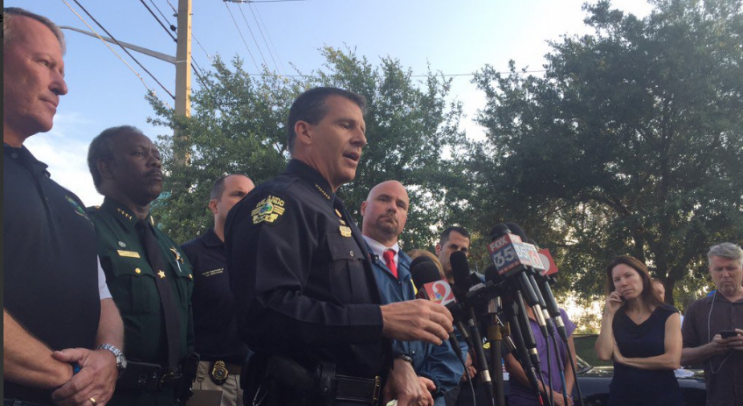 Update 9:40 pm: Officials continue to release the names of the victims:

Update 9:29 pm: Press briefings take pause until the morning. Join us on Morning Edition, beginning at 6:00 AM for the latest.

Media: Unless there’s something significant to share, there will be no more briefings tonight on Orange Ave. We will resume briefings in am

Update 3:39 pm: NPR reports there are still bodies in the Pulse nightclub

Update 10:41 am: Orlando Police Chief John Mina calls the shooting one of the worst mass shootings in US history.

. @ChiefJohnMina One of the worst mass shootings in our nation’s history. pic.twitter.com/OBKbnq5W0O

Investigators are calling the shooting a domestic act of terrorism.

The gunman took club patrons hostage between 2:00 am and 5:00am early Sunday morning. Orlando Police say calls from the bathroom of the club help coordinate the rescue effort.

Officers shot and killed the suspect.

Officials say this is a “lone wolf” attack. The suspect has not been identified. Orlando Police Chief John Mina says the gunman was organized, well prepared, and not from this area.

Authorities say its unclear whether Pulse was targeted because it was a gay nightclub. “We don’t know that that had any specific impact on the actions taken this evening, at least not yet,” said Ronald Hopper, FBI Assistant Special Agent In Charge.

Victims of the shooting were taken to Orlando Regional Medical Center. Friends and family of those that may be injured are asked to reach out to ORMC. Facebook pushed a ‘safety check’ alert feature to those in Orlando.

If you believe an immediate family member may be in the hospital, please come to the main entrance of ORMC’s new north tower. ID required.

Blood bank One Blood is calling for donations to treat the many injured.

Governor Rick Scott is trraveling to the area. In a statement, Scott says he’s allocating resources” to assist with the shooting in Orlando. Our state emergency operations center is also monitoring this tragic incident.”

President Obama has been briefed on the shooting, according to his press secretary, and the President has directed federal officials to offer resources to the investigation.