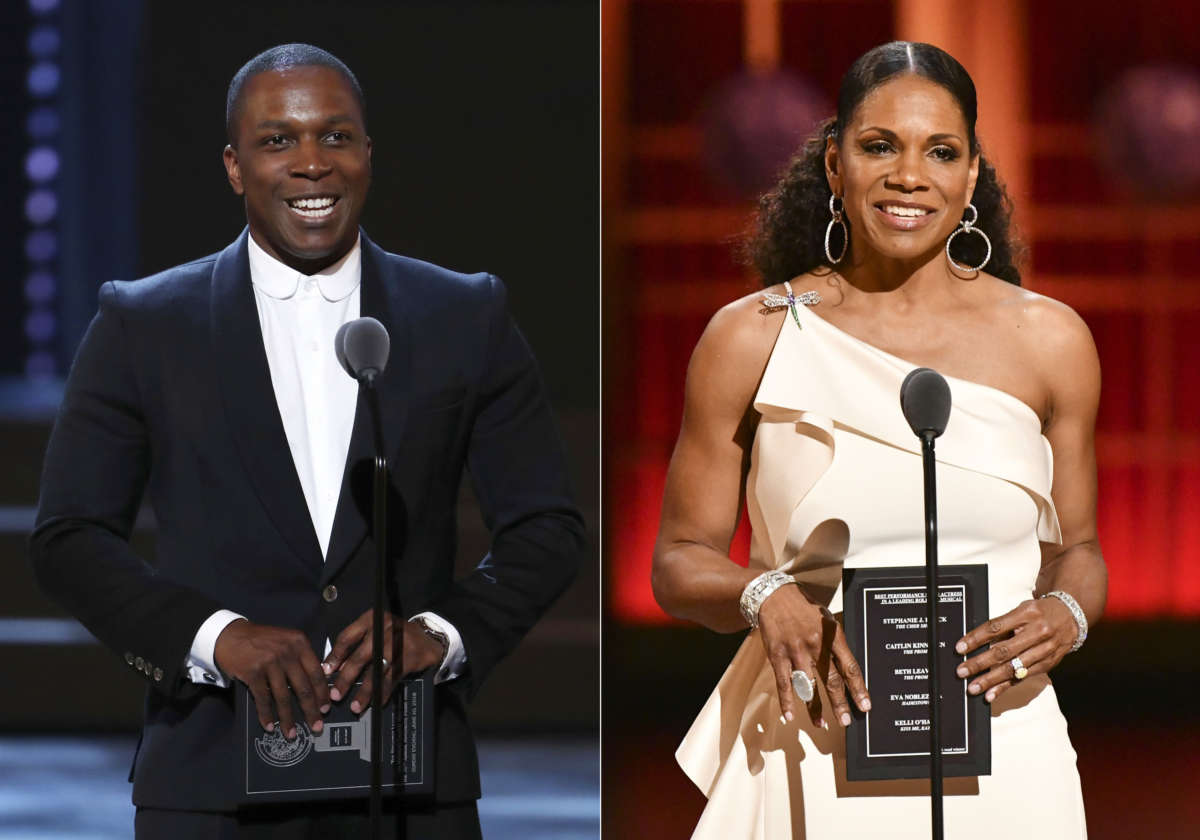 Audra McDonald and Leslie Odom Jr. will host different parts of the Tony Awards broadcast on Sept. 26: the awards ceremony and the following two-hour celebration of Broadway's return, respectively.

There’s a sigh of relief on Broadway, these days – shows are reopening, and bars and restaurants in Times Square are filling up. And tonight, more than 15 months after they were originally scheduled, the 74th Annual Tony Awards will be presented. Previous winners Leslie Odom Jr. and Audra McDonald will host, with appearances from Lin-Manuel Miranda, Chita Rivera and Kristin Chenoweth, among others. But these pandemic Tonys are by no means business as usual.

“It’s a strange time because of COVID,” says veteran producer Manny Azenberg, who has nine Tony Awards on his shelf, including one for lifetime achievement. “It is incorrect to put the old values on these Tonys or in this season or even in the next season.”

When Broadway shut down in March of 2020, 20 shows had opened, with 16 more to come. But after it became clear Broadway would remain dark, the Tony nominating committee decided to go ahead with what they had. Because two shows had opened after the February deadline (Girl from the North Country and West Side Story), they were deemed ineligible.

That means some of the winners tonight will last have been seen two years ago, Azenberg says. “It’s not so contemporary and it’s somewhat after the fact,” he explains. “On the other hand, the kids that are nominated – and there are a lot of kids nominated – it’s the highlight of their time. They didn’t do anything to cheat. They worked hard, and the shows did not have a year and a half of any acknowledgment, publicity or anything.”

So, it’s a weird year. All of the nominated best plays have closed, with no plans to reopen. The two front-runners are Jeremy O. Harris’ provocative Slave Play, which puts three interracial couples at a role-playing therapy session, where they explore the master-slave dynamic, and The Inheritance, Matthew López’s two-part exploration of contemporary gay life inspired by E.M. Forster’s Howards End. Slave Play has 12 nominations, while The Inheritance has 11.

None of the Best Musical nominees has an original score

The biggest award at the Tonys is always for best musical. But this year, none of the three nominated shows has an original score – there’s Jagged Little Pill, a contemporary family/high school drama which uses Alanis Morrissette’s songs (15 nominations), Tina – The Tina Turner Musical, a Behind the Music-type biography of the singer (12 nominations) and Moulin Rouge! The Musical, based on the Baz Luhrman film, with more than 70 songs.

“We’ve all known the songs from those three musicals for the last 20 years,” says New York Magazine theater critic Helen Shaw, who was looking forward to shows with new music. “Yeah, I mean, it’s weird.”

Only one musical that opened in the fall of 2019 had an original score – an adaptation of The Lightning Thief, based on one of the Percy Jackson novels. It got a critical drubbing, closed before the end of its limited run and was ignored by the nominating committee. Normally, best score goes to musicals like Hamilton or Hadestown; this year the nominees all wrote or adapted incidental music for plays, like A Christmas Carol.

The “Best Actor in a Musical” category has only 1 nominee

But perhaps the strangest category this year is Best Actor in a Musical. Aaron Tveit, star of Moulin Rouge!, is the only nominee. “I didn’t know if the whole category was going to be canceled. Right?,” he says. “You know, there’s never been a situation where there’s only one nominee in an acting category before, I’m pretty sure. And you just kind of laugh and shake your head at the thing. But … I’ve only taken it as a recognition of my work and our show’s work.” He can win his category if he gets 60% of the vote.

Moulin Rouge restarted performances on Friday, and tonight, Tveit and the cast will be performing live on the Tonys. Shaw, who is also a Tony voter, says the recognition that comes from nominations and winning has real world impact. “These are not laurels that are being handed down from Olympus here,” she explains. “This is an industry award given by members of the industry to other members of the industry, and the point of awards is obviously to celebrate. But it has a material impact on their contractual asks in the future.”

The ceremony will be split in half

And the broadcast itself is an advertisement for Broadway. Emmy Award-winner Ricky Kirshner is producing the split ceremony – two hours on the streaming service Paramount+, where most of the awards will be handed out, and a two-hour concert called “Broadway’s Back!” on CBS, where best musical, play and revival will be announced. “We’ve got a little bit of everything,” Kirshner says, “and the three nominated musicals will do a full-on production number, so you can see what their shows look like for real.”

Kirshner also thinks the ceremony will be even more emotional than usual. “I think there’ll be moments over the four hours on Sunday where someone will walk out who hasn’t been in front of an audience in 18 months and just be, like, overwhelmed emotionally. You realize for these people, that’s their life, live entertainment, and they’ve been without it.”

Shaw thinks, after the long silence, brought about by the pandemic, and the losses the theater community has suffered (such as those who died from COVID, including playwright Terrence McNally, songwriter Adam Schlesinger and actor Nick Cordero), it’s proper to hold the Tonys now. “It does all the things that an awards season should do,” she explains. “It celebrates, it elevates, it reminds, it advertises. But it also ends. It ends something. It says this is over. Now we do this new thing.”