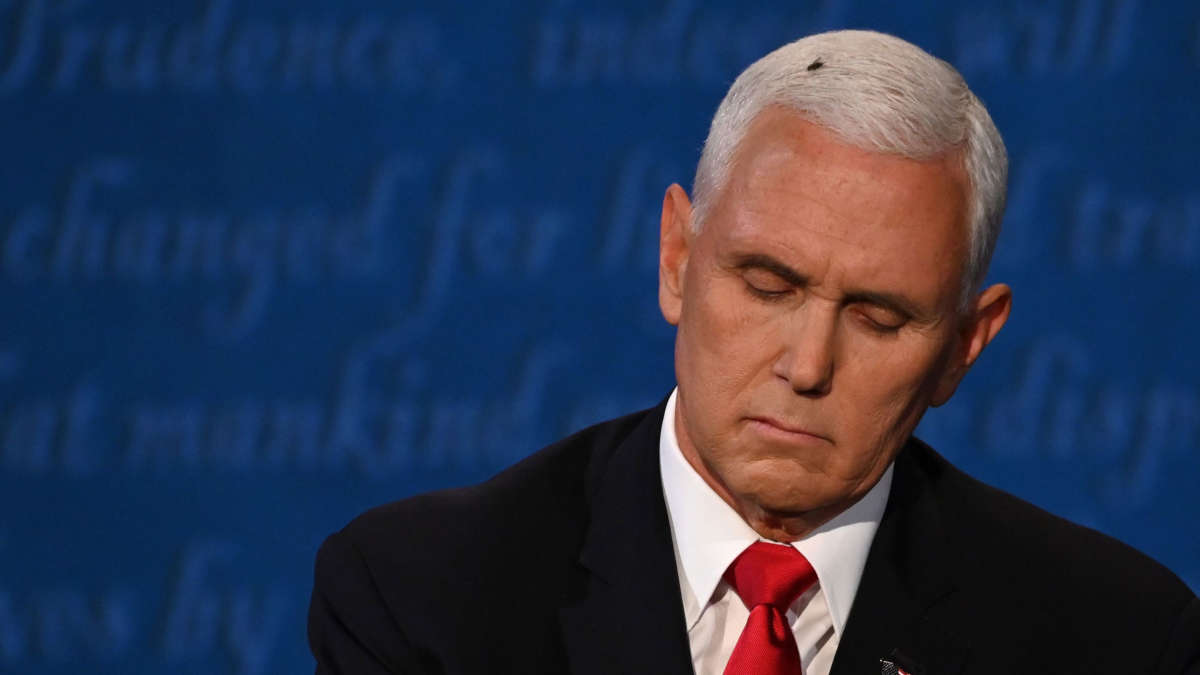 A fly lands on Vice President Pence's head during the debate. Eric Baradat/AFP via Getty Images

After a raucous debate between President Trump and former Vice President Joe Biden last month that was marked by constant interruptions, name-calling and a moderator unable to control the discussion, Wednesday night’s vice presidential debate marked a return to a more traditional affair.

It’s unclear whether it will be the last debate of the 2020 presidential campaign. Trump, who is recovering at the White House and sidelined — at least for the moment — from the campaign trail after being hospitalized with COVID-19, said Thursday he’s “not going to do a virtual debate” after the independent commission that runs the debates announced that the second presidential debate, which had been scheduled for Oct. 15 in Miami, will now be virtual. Trump called the format “a waste of time,” adding he had no advance notice of the change.

While most voters don’t base their decision on the vice presidential candidates, 2020’s contest is possibly different. Biden is 77 and has presented himself as a “transitional” figure to the Democratic Party’s next generation. And the president is 74 and has contracted a serious illness.

1. The 2020 election still hinges on the coronavirus.

From the outset of the debate the pandemic was center stage. Spectators were warned not to remove their masks. The candidates sat at desks more than 12 feet apart and separated by plexiglass shields. It was also the first topic.

Harris was aggressive, seizing on the Democratic ticket’s central argument that the Trump administration’s handling of the novel coronavirus was “the greatest failure of any presidential administration in the history of our country.” She accused the president of covering up information about the virus when he was briefed in January by his national security team, and she argued that Trump still didn’t have a plan to combat the disease.

Pence defended the president’s record and pointed to Trump’s decision to restrict travel from China at the end of January as evidence that he took the threat seriously. He noted that the Biden-Harris team’s plan to address the coronavirus with testing and the development of a vaccine mirrored actions the administration has already taken. “It looks a little bit like plagiarism,” Pence said.

He also attempted to portray Harris’ criticism of the administration’s response as an attack on the sacrifices Americans have made during the crisis, an answer that seemed to fall flat.

Throughout the debate, whether the question was about the economy or health care, Harris returned to the administration’s response to the pandemic.

Pence, in turn, touted what he called record-setting progress on developing a vaccine and pledged, as the president has before, that millions of doses would be available by the end of the year.

Harris said she would take a vaccine approved by medical professionals, but “if Donald Trump tells us that we should take it, I’m not taking it.”

Pence said Harris was seeking to “undermine public confidence” in the effort to develop and approve a vaccine. “Stop playing politics with people’s lives,” he said.

2. There was an actual debate this time, but not necessarily answers to the moderator’s questions.

There was far less interrupting, angry cross-talk and fewer personal attacks than in the presidential debate. Moderator Susan Page, Washington bureau chief of USA Today, called for a “respectful exchange” and regularly reminded the candidates that answers should be “uninterrupted.”

Pence and Harris didn’t always comply. And Harris pushed back, calling out Pence when he started to step on her answers or take away from her time. She scolded him with, “Mr. Vice President, I’m speaking. I’m speaking” — making it clear she wasn’t going to let a male debate opponent get away with any intimidation tactics.

Sen. Kamala Harris, D-Calif., speaks during Wednesday’s debate. She accused the president of covering up information about the coronavirus when he was briefed in January and argued that he still didn’t have a plan to combat the disease.
Robyn Beck/AFP via Getty Images

Both candidates frequently sidestepped questions altogether. The moderator chose to move on to new topics rather than pose follow-up questions, which was a lost opportunity on some key issues that could have made news or at least educated voters about the candidates’ positions. Both ignored a key question that could be top of mind with Biden’s age and the president’s illness — what would you do if the president became incapacitated?

Pence didn’t answer how a Trump-Pence administration would protect preexisting conditions if the Affordable Care Act is struck down by the Supreme Court. He also didn’t explain what he would do if the president didn’t accept the election results or agree to a peaceful transition of power.

Harris refused to answer a question posed by both the moderator and again by Pence about whether she backed what many liberal activists are pushing: adding justices to the Supreme Court — court packing. Biden dodged the same question in the first debate.

Both also evaded a question about what they thought states should do if the Supreme Court struck down Roe v. Wade, which would leave the states to write abortion laws.

3. Candidates’ strategies reflected the state of the campaign — Pence attacked Biden-Harris as extreme; Harris pivoted to Trump’s record on the coronavirus.

Pence’s debate style is almost polar opposite of the president’s. He was calm and disciplined and came prepared to paint the Biden-Harris ticket as captive to the extreme left of the Democratic Party, specifically on economic issues.

The economy has consistently been the GOP ticket’s strongest issue with voters, but that strength has declined as the country struggles with job losses and business closures. The vice president cited an analysis that Harris in 2019 was the U.S. Senate’s most liberal member, and he repeatedly linked the Democratic ticket with the Green New Deal, a proposal pushed by progressives in Congress to remake the economy with a new energy infrastructure. Although Harris backed the proposal prior to her nomination, Biden has not.

Pence also asserted that Biden’s vow to roll back the president’s 2017 tax cuts would translate into tax increases on Americans as soon as he took office, though in fact that would take an act of Congress.

Harris appeared in the crowded Democratic primary debates, but she has had less experience on the debate stage one-on-one. She leaned on her skills as a prosecutor and came with a mission to hammer the case against Trump’s handling of the pandemic and the fallout for the economy. She made Pence Trump’s stand-in on the subject.

In several exchanges, Harris sidestepped directly answering questions from the moderator and instead shifted the conversation to Trump. She used a question about the Breonna Taylor case in Kentucky to remind the audience of one stunning moment in the Biden-Trump debate, when the president declined to denounce white supremacists.

4. A fly generated the most buzz.

A fly lands on Vice President Pence’s head during the debate.
Eric Baradat/AFP via Getty Images

The debate didn’t generate much news or many knockout lines, so when a fly landed and remained on the vice president’s head for over two minutes, people were transfixed and many took to social media, unable to resist weighing in with jokes. Enormous attention was given to health precautions, ventilation systems and testing of attendees at the debate site. But the appearance of one insect was a scenario no one prepared for, and it was hard to ignore.

Shortly after the debate ended, the Biden campaign posted an ad for a branded fly swatter.