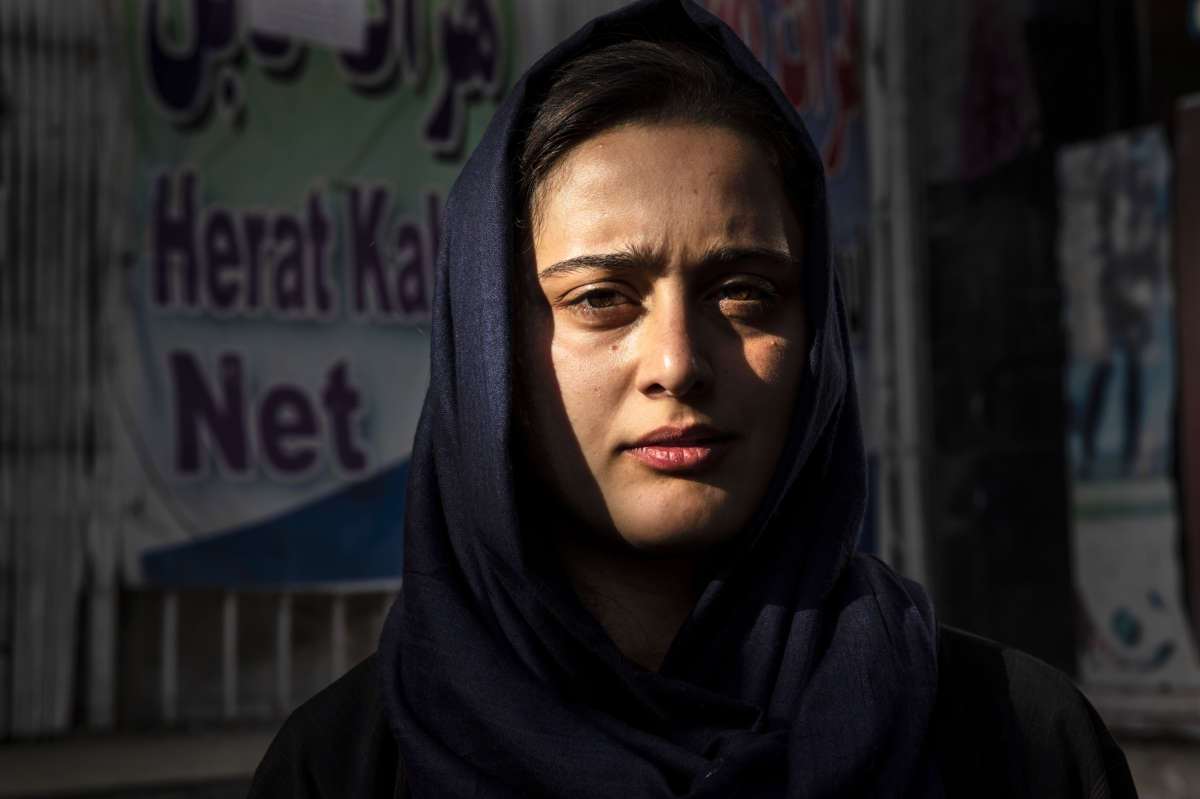 Dawlatt Naimati, 22, from Kunduz, stands outside an internet café where she is seeking help applying for a U.S. special immigrant visa on Aug. 8, in Kabul, Afghanistan.
Image credit: Paula Bronstein

Refugees in Afghanistan are flooding into Kabul as the country’s U.S.-trained forces appear to be collapsing in the face of a concerted push by Taliban forces. Names and places that became familiar to Americans during their country’s long involvement there — including Kunduz and Kandahar — have fallen like dominoes in recent days as the Taliban sweep toward the capital.

It’s a scene being likened to the 1975 fall of Saigon in the wake of the U.S. withdrawal from Vietnam.

While it’s not yet clear if the Taliban will be able to seize control of the entire country, the speed of the radical religious movement’s advance has alarmed many inside and outside the country. The Taliban have gained a reputation, after all, for brutality and enforcement of a harsh brand of Islamic justice in the five years they ruled until being toppled by invading U.S.-led forces in 2001.

Here’s a look at why the outcome in Afghanistan matters:

The Taliban of the past were infamous for denying education to women, carrying out public executions of their opponents, persecuting minorities, such as the Shiite Hazaras, and destroying priceless ancient giant stone Buddhas at Bamiyan.

There’s no reason to think that a new Taliban regime won’t be another humanitarian eyesore, Husain Haqqani, a former Pakistani ambassador to the U.S., tells NPR.

So far, in the areas of the country where they have regained control, the Taliban “have been executing people summarily, they have been lashing women, they have been shutting down schools. They have been blowing up hospitals and infrastructure,” he warns.

Ronald Neumann, a former U.S. ambassador to Afghanistan during President George W. Bush’s administration, told NPR’s Morning Edition on Friday that “thousands, probably hundreds of thousands of Afghans” who believed in the U.S. are suddenly finding themselves the subject of Taliban reprisals. “[T]hese people have been steadily … assassinated for the last year,” he says.

A Taliban regime could again become a safe haven for extremists

The casus belli for the U.S.-led invasion of Afghanistan following the Sept. 11, 2001, terrorist attacks was that the Taliban refusal to hand over Osama bin Laden — considered by Washington to be an international fugitive.

While in recent months several experts have weighed in, suggesting that such a concern is overwrought, there’s no guarantee that Afghanistan wouldn’t once again become a safe haven for terrorists – either those intent on doing harm to the U.S. or other foreign powers.

Speaking on NPR’s All Things Considered this week, former U.S. Secretary of Defense Leon Panetta offered this blunt assessment: “The Taliban are terrorists, and they’re going to support terrorists.”

“If they take control of Afghanistan, there is no question in my mind that they will provide a safe haven for al-Qaida, for ISIS and for terrorism in general,” he said. “And that constitutes, frankly, a national security threat to the United States.”

Ghulam Isaczai, Afghanistan’s representative to the United Nations, sounded a similar warning last week, saying that in “deliberate acts of barbarism, the Taliban are assisted by transnational terrorist networks.”

Pakistan’s Inter-Services Intelligence, or ISI — the country’s equivalent of the CIA — is widely believed to have helped foster the Taliban prior to the religious movement’s 1996 takeover in Afghanistan. Pakistan’s military, in particular, has long viewed an ideologically and religiously like-minded Afghanistan as a necessary bulwark against its traditional rival, India.

But Pakistan’s long, porous border with Afghanistan has brought it as much trouble as brotherhood: For years, Pakistan housed tens of thousands of Afghan refugees in border camps such as Jalozai, placing a financial and political strain on a succession of shaky governments in Islamabad.

The Taliban in Afghanistan helped inspire the deadly Tehrik-i-Taliban Pakistan, more commonly known simply as the Pakistani Taliban. The leaders of the two groups are reportedly at odds and don’t share common goals. Even so, “if there is a Taliban government in Afghanistan, certainly that’s going to embolden the [Pakistani Taliban],” Madiha Afzal, the David M. Rubenstein fellow in foreign policy at the Brookings Institution, tells NPR.

Haqqani, the former ambassador who is now director for South and Central Asia at the Hudson Institute, writes in Foreign Affairs that “Islamist extremism has already divided Pakistani society along sectarian lines, and the ascendance of Afghan Islamists next door will only embolden radicals at home.”

He says that Pakistan’s “risky game” of supporting the Taliban while trying to maintain good relations with Washington has “was never going to prove sustainable in the long term.”

“Pakistan has managed to kick the can down the road for a long time. Soon, however, it will reach the end of the road,” he writes.

China could gain a foothold in the region

While the Taliban’s brutal tactics on the ground in Afghanistan seem to have changed little since the 1990s, in recent weeks, its leaders have been in a full-court press to gain allies and influence abroad.

And, the effort is showing signs of paying off.

The last time the Taliban were in power, they turned Afghanistan into a virtual pariah state — isolated from the rest of the world, save for Pakistan, Saudi Arabia and the United Arab Emirates — the only governments willing to recognize them. But in recent weeks, top Taliban leaders have been on a whirlwind international tour, visiting Iran, Russia and China.

China has reportedly promised big investments in energy and infrastructure projects, including the building of a road network in Afghanistan and is also eyeing the country’s vast, untapped, rare-earth mineral deposits. And Beijing is reportedly preparing to formally recognize the Taliban if the group seizes control of the country.

Laurel Miller, the program director for Asia at the International Crisis Group, tells NPR that the Taliban are “on a campaign to secure legitimacy in the eyes of the regional countries and probably countries in the Persian Gulf.”

Earlier this week, U.S. envoy Zalmay Khalilzad said the U.S. would not recognize a Taliban government that comes to power through force.

For the Taliban then, courting other countries is “a way of blunting the ability of the U.S. or others to use the threat of becoming a pariah state again … as any kind of leverage over them,” Miller says.

“The Taliban see China as a source of international legitimacy, a potential economic supporter and a means of influence over Pakistan, a Chinese ally that has aided the group,” according to The Wall Street Journal.

Meanwhile, the Taliban could be pushing China and Russia closer as the two countries seek a hedge against the potential for instability in Afghanistan. Both countries are concerned about possible “spillover” of Islamist extremism, Miller says.

Despite their Cold War animus, Beijing and Moscow this week reportedly deployed 10,000 troops, as well as planes and artillery pieces, to China’s Ningxia Hui Autonomous Region as part of a joint exercise. Although theat exercise was conducted far from Afghanistan, it was “demonstrated the determination and ability of Russia and China to fight terrorism, and jointly protect peace and stability in the region,” according to a statement released by Russia’s Ministry of Defense.