4 Dead, More Than 20 Injured In Attack Near U.K. Parliament 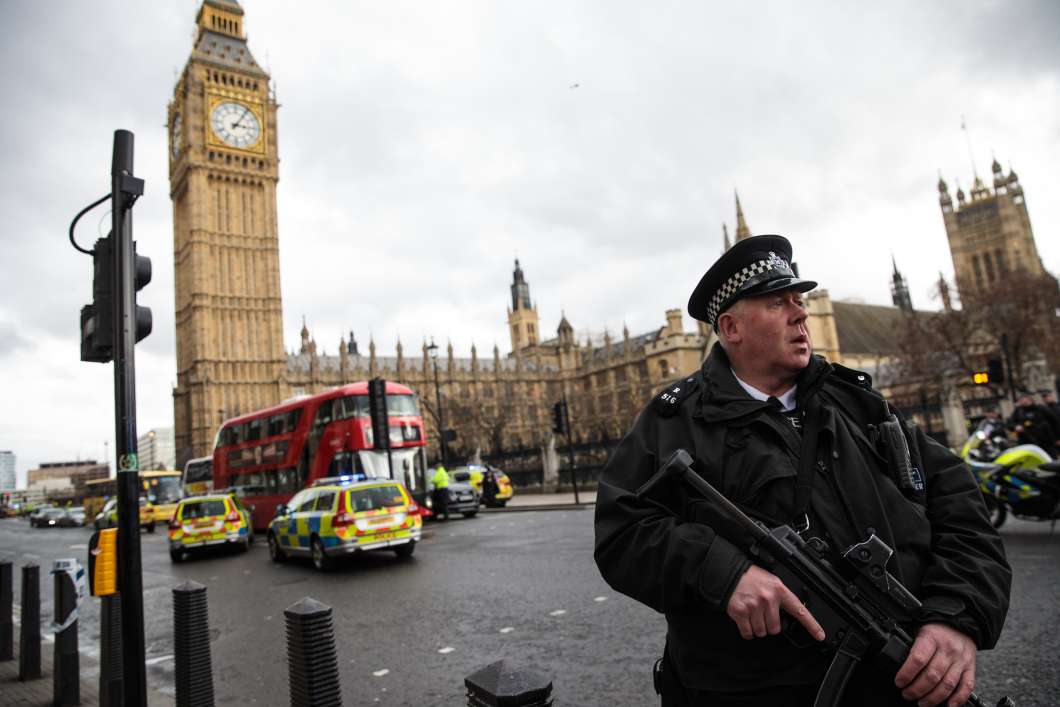 An armed police officer stands guard near Westminster Bridge and the Houses of Parliament on Wednesday in London, England.
Image credit: Jack Taylor

An attack mid-day Wednesday in the heart of London has caused at least four deaths and 20 injuries, according to police.

Police say the dead include a police officer and the suspected assailant, as well as two apparent civilian deaths.

Authorities have declared the attack a “terrorist incident,” while also saying in a statement investigators “remain open minded to the motive.”

Witnesses report that a car barreled into pedestrians along the sidewalk of Westminster Bridge, causing multiple “catastrophic injuries,” according to Britain’s press association. At a press conference Wednesday, a police representative say they believe this is where the two civilian deaths occurred. A woman was also found, alive but injured, in the Thames.

The car then crashed into the fence that surrounds Parliament, and a man armed with a knife emerged and stabbed a police officer. The attacker was later shot by police.

“There has been a serious incident within the estate,” Commons Leader David Lidington told members of Parliament. “It seems that a police officer has been stabbed [and] the alleged assailant was shot by armed police. An ambulance is currently attending the scene to remove the casualties.”

The U.K. House of Commons is under lockdown, as NPR’s Frank Langfitt in London reports. Here’s more from Frank on how the incident unfolded:

“This is the bridge that goes right up to Big Ben, it crosses the Thames. And it appears that a vehicle went across the bridge [and] went down the sidewalk. And we can see from aerial helicopter shots that in fact there are at least four or five people being treated, lying on sidewalk. Then it came across the bridge, it crashed into a gate, the front end is smashed up.

“And then somehow a man — we don’t know if it’s the same person — but someone got actually inside the gates of the Parliament building and apparently stabbed a police officer.”

Authorities have not commented on a possible motive, or identified the driver.

The Metropolitan Police said on Twitter that armed officers are among the law enforcement personnel “on scene and dealing with the incident.” It said police were called to the scene at around 2:40 p.m., local time.

House of Commons business was suspended for approximately 15 minutes before Lidington gave his brief address on the security situation.

During the lockdown, members of the House of Commons nearly filled the chamber’s famed green benches — moments earlier, they had sat empty after a sparsely attended debate over pension plan rules.

MPs later voted to adjourn parliament for the remainder of the day, despite the continuing lockdown.

“Let’s just make the best we can of this horrible situation,” said Deputy Speaker Lindsay Hoyle.

“For this to happen right in the heart of the city is very shocking,” Frank added. It’s also surprising that an attacker appears to have gotten into the heavily-fortified premises of Parliament.

The nearby Westminster metro station is closed “due to a police investigation,” city authorities said, and police have asked members of the public to steer clear of the area.

Additional police have been deployed around the city, Harrington said.

White House press secretary Sean Spicer said in a tweet that President Trump has been briefed on the ongoing situation.