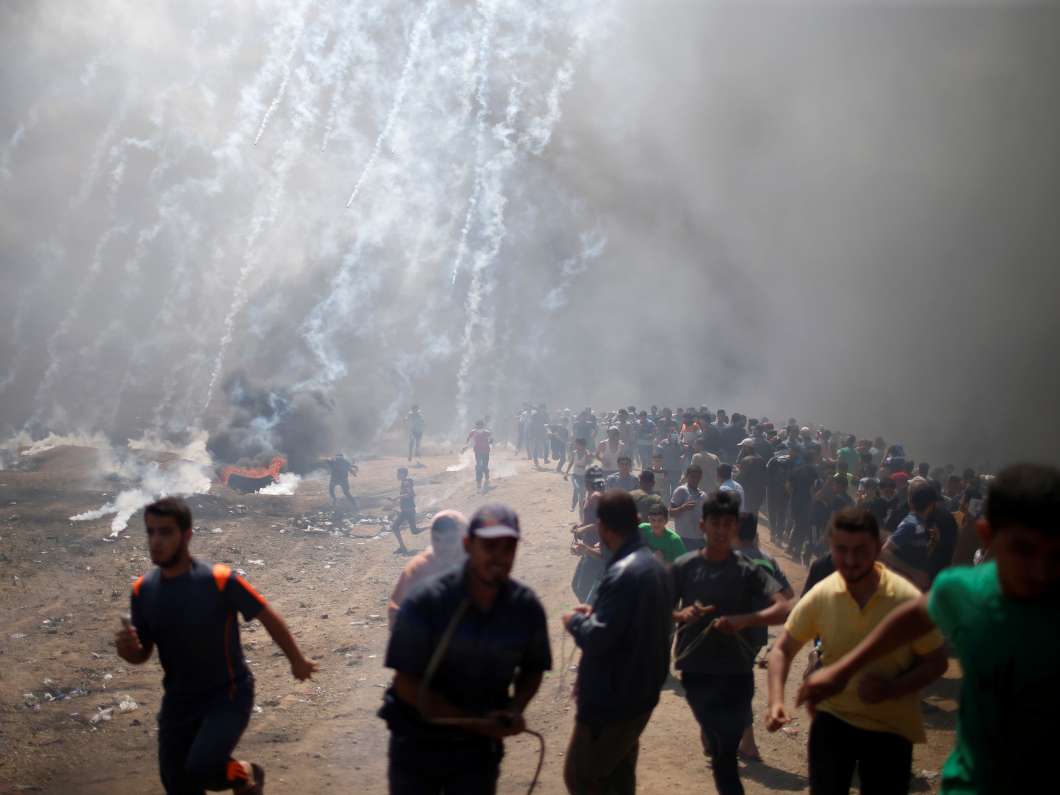 Palestinian demonstrators run from tear gas fired by Israeli troops during a protest against the U.S. Embassy move to Jerusalem and ahead of the 70th anniversary of Nakba, at the Israel-Gaza border east of Gaza City.
Image credit: Mohammed Salem

Tens of thousands of Palestinians are protesting the opening of the new U.S. Embassy in Jerusalem, and Israeli army forces have killed 37 protesters, according to the Gaza Health Ministry. The ministry also says nearly 1,000 people have been wounded.

More than 35,000 people are protesting along the Gaza border, the Israel Defense Forces say. The army says it killed three protesters who were trying to set a bomb next to the security fence in Rafah.

The clashes came along Israel’s border fence with Gaza. The number of casualties has been steadily rising, as the opening of the American embassy at 4 p.m. local time (9 a.m. ET) neared.

The embassy’s controversial opening comes as Israel marks its creation 70 years ago – an event that Palestinians refer to as Nakba – Catastrophe – because that development also turned more than 700,000 Palestinians into refugees.

“A great day for Israel!” President Trump tweeted on Monday. He also told his followers to watch Fox News for coverage of the embassy’s opening.

Both Israelis and Palestinians claim Jerusalem as their capital. Trump announced last December that he would break with the consensus of America’s allies and decades of tradition by recognizing Jerusalem as the official capital, and moving the embassy there from Tel Aviv.

“The rioters are hurling firebombs & explosive devices, burning tires, throwing rocks, & attempting to ignite fires in Israeli territory,” the army said via Twitter. “IDF troops are responding with riot dispersal means and fire, and are operating according to standard operating procedures.”

Both sides of the conflict had been preparing for today’s events. In Hamas-ruled Gaza, violent protests have erupted every Friday since March, venting anger over Israeli’s blockade. The Israeli Defense Forces say that terrorists are using civilians to cover their actions. Military jets have been dropping leaflets warning Palestinians not to come near the security fence.

As NPR’s Camila Domonoske reported when Trump announced the change in December, the president said that “his announcement does not mean the U.S. is taking a position on any possible future peace negotiations between Israelis and Palestinians or on the ‘final status’ of Jerusalem after such talks.”

“Today we finally acknowledge the obvious,” Trump said. “This is nothing more or less than a recognition of reality.”