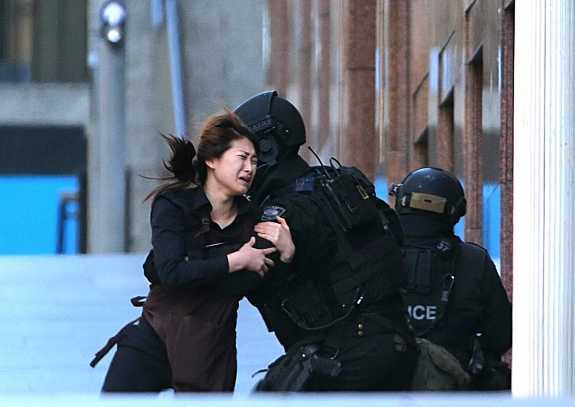 A hostage runs to armed tactical response police officers for safety after she escaped from a cafe under siege at Martin Place in the central business district of Sydney, Australia, on Monday.
Image credit: Rob Griffith

Just as the siege entered its second day, police stormed a chocolate shop in downtown Sydney, ending a more than 12-hour hostage standoff that began during morning rush hour.

Television images showed police throwing what appeared to be stun grenades before entering the building. One hostage was carried out, while others ran out with their hands over their heads.

New South Wales police, in a statement, said shots were fired during the confrontation. It said the 50-year-old gunman died in hospital. A 34-year-old man and a 38-year-old woman also died in hospital, the statement said.

The situation began unfolding shortly before 10 a.m. local time Monday, when a gunman entered the Lindt Chocolat Cafe in downtown Sydney. (Sydney is 16 hours ahead of the U.S. East Coast.)

Shortly after, hostages were seen at the window of the chocolate store holding up a black flag with the shahada, an Islamic creed declaring Allah as the true God.

The motive is still unclear, but according to local media, police said the suspect was an Iranian cleric who had faced criminal charges in the past.

Five hostages managed to escape before police moved into the building.

A large portion of Australia’s largest city was still under lockdown as Monday turned into early Tuesday morning.

ABC (the Australian Broadcasting Corp.) is streaming its coverage live here. We’ll be following this story as it unfolds on this post, so hit refresh to see the latest.

Television images are now showing paramedics removing at least four people on stretchers from the building.

Some people ran from the building with their hands up, while others were escorted to safety by police.

It’s still not clear why police made a move into the cafe. It is now 2:24 a.m. on Tuesday in Sydney.

Television images showed police storming the cafe, while a sixth hostage was carried out.

The images showed police, in tactical gear, using what appeared to be stun grenades, before moving into the building.

The Sydney Morning Herald reports Monis first gained the attention of authorities when he “penned poisonous letters to the family of dead Australian soldiers.”

“Last year he was charged with being an accessory to the murder of his ex-wife and mother of two.

“And most recently, he was charged with more than 50 allegations of indecent and sexual assault relating to time allegedly spent as a self-proclaimed ‘spiritual healer’ who dealt with black magic at a premises in western Sydney more than a decade ago.”