25 years on, Lilith Fair is a reminder of how one woman’s radical idea changed music 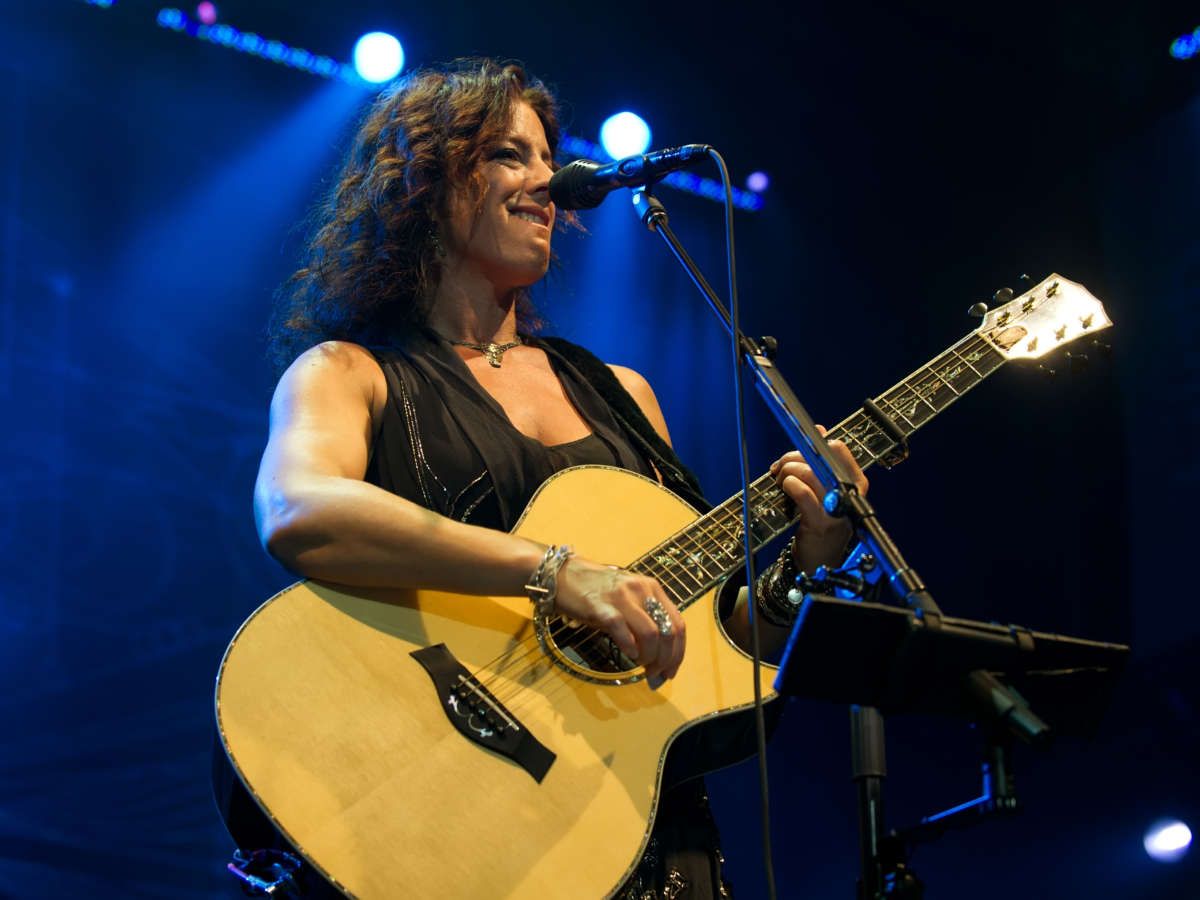 Lilith Fair was the culmination of a year of work by its founder, a Canadian singer-songwriter. Sarah McLachlan had been told by music and concert industry executives that putting more than one woman back-to-back on a lineup or radio playlist wouldn’t sell.

“Like, I’d walk in and do an interview and they said, ‘Well, we’d love to add this song but we can’t add you this week because we had a Tori Amos or because we added Tracy Chapman or because we added Sinéad O’Connor,'” she recalls. “And it was extremely frustrating. So the beginning of this was just born out of a desire to come together as a community. And it became this — we’re going to break down some barriers. We’re going to prove these guys wrong.”

So McLachlan started to fundraise and work with performers to join her on stage before launching Lilith in the summer of 1997.

In its first summer, Lilith easily outpaced the then-fading Lollapolooza festival, in both audience size and ticket sales. It returned for two more summers and went on to become the top-grossing music festival of the late 1990s, racking up $60 million in ticket sales over its three-year run.

The eclectic group of women artists included folk, rock, country and pop musicians and sold out nearly every single show its first year. But as Lilith’s popularity increased, critics disparaged the festival as “mom music” and called out its mostly white bill of performers.

Exactly 25 years later, musicians who participated in Lilith Fair and journalists who covered it reflected on the festival’s importance in interviews with NPR.

“Safe space is something that we’re still trying to foster and kind of hold it up as an ideal, and it’s like wait — this was accomplished three summers in a row with the biggest names in music,” she explains. “It showed people models of possibility.”

Criticism was quick, but so was change

Perhaps inevitably, Lilith became a target for comedians and cultural critics scoring points at the expense of female musical agency. It took just a few months after Lilith’s very first show for Saturday Night Live to introduce a recurring character mocking the overly earnest stereotype of a Lilith artist, played by Ana Gasteyer, who droned on about her folkist approach.

By 1998, the organizers of Lilith had more money to work with, and could point to the marked success of the previous summer. The festival expanded from 37 shows to 57 shows, expanding its lineup to include more than 100 artists across three stages. Festival programmers challenged perceptions of Lilith Fair as a majority-white group of folk and alternative artists at a time when R&B, rap and hip-hop were gaining broader popularity.

In the lead-up to its second year, McLachlan worked with organizers to intentionally add more artists of color to the ticket: Erykah Badu and Queen Latifah joined the main stage for Lilith’s second year, along with up-and-coming Missy Elliott, who made her debut live performance at Lilith Fair in a giant vinyl trash-bag-inspired suit.

“All of that second year, I think, is really significant because those were artists who were changing things in different worlds than the world that [McLachlan] occupies,” says NPR Music critic Ann Powers, who attended all three summers of Lilith Fair. “And through a 2022 lens, we could say, ‘Oh I wish it’d been even more diverse’ … but you got to give them credit.”

The addition of more artists of color opened the festival to a broader audience, and exposed its up-and-coming Black female artists to a new set of fans. Meshell Ndegeocello, a bassist and composer who joined the show in 1998, recalls the festival’s comforting atmosphere and the thrill of getting to see such powerful female artists — from Paula Cole to Erykah Badu to Natalie Merchant — performing together and supporting each other.

“I was able to see people I admired but cherished in a way that had a musical connection to me that was uplifting and healing,” she remembers. “And I think I flourished as a musician because I was out of the male gaze and music where it’s just, you know, ‘Show me what you got.’ And it was more like, ‘What can you make me feel?'”

“To create an environment where everybody gets to be seen and heard and valued, and come as you are, you know, let your freak flag fly … this is the place you get to do that and there is no judgment here,” she recalls.

After its third successful summer on the road, the 90’s iteration of Lilith came to an end.

By that time, many stars could look back and point to Lilith Fair as a major catalyst for their success — like Jewel, who graced the cover of Time Magazine in 1997 and sang the National Anthem at the 1998 Super Bowl. Or English singer Dido, whose song “Thank you” was featured in movie soundtracks and sampled in Eminem’s award-winning single “Stan.”

“Some of these women were told by their agents, ‘This is going to kill your career if you do this,'” says Hopper, referring to early industry doubts around the festival’s founding. “And in fact the opposite happened … it minted stars.”

It was partly the demands of Sarah McLachlan’s own celestial career that brought an end to Lilith Fair. Releasing two albums in three years, kick-starting a major touring festival and getting married –- all milestones that left the singer exhausted. As McLachlan recounted to Glamour Magazine in 2017, “I’ve got to go home. And I have to have a life. People have been having babies and getting married and divorced, and I’ve missed it all.”

But in 2010, McLachlan tried to get Lilith off the ground again, turning to former festival favorites such as Erykah Badu and Tegan and Sara.

Lilith Fair’s second iteration faced several obstacles. For one, McLachlan was now the mother of two daughters and was busy finishing yet another album. As she explained to Glamour, she was headlining the tour and working with many of the same behind-the-scenes coordinators who had helped manage previous tours. Still, disorganization and shoddy financial management caused many artists — including Kelly Clarkson and Norah Jones — to drop out of shows at the last minute.

What’s more, the music industry had undergone a seismic change over a decade. The digital music era meant that audiences were now discovering new music online, rather than on touring festival lineups. Ticket prices had also increased, with some Lilith VIP packages costing $750.

McLachlan later speculated that, much like herself, Lilith’s original audience had developed a different set of priorities. “A lot of the young women who came to Lilith back then now have kids at home, have busy careers,” she told the Canadian Broadcasting Corporation in 2012. “And I don’t think we did enough due diligence in discovering how our audience had changed and how to reflect that. In a new show, we kind of threw up the same model, which, you know, obviously in hindsight was quite stupid and it didn’t get the audiences that we expected to get.”

McLachlan and her partners ended up canceling the tour after only a few shows.

Looking back, did Lilith achieve what it set out to accomplish?

Ann Powers says yes. She says it upended longstanding presumptions that audiences wouldn’t connect with the femininity and eclecticism of an all-female music festival. Not only that, Lilith Fair radically expanded creative possibilities for women musicians, who took to its stages to triumph, to experiment, even to fail and to try again.

“This is a snapshot of a huge array of what women were doing in music in this era when there was a lot of space and demand for women of all kinds to be taking risks in music,” Powers says. “And Lilith Fair is almost like, ‘Here’s your compilation of every every wild idea that women had in music in the ’90s.’ And I think so much of that stuff is just like forgotten.”

For the artists and fans who experienced it, Lilith Fair felt revolutionary. It’s success upended concert industry norms and created a new place where female artistry could evolve and flourish. Lilith Fair was a cultural phenomenon that coalesced at just the right time.

NPR researcher Will Chase contributed to this report