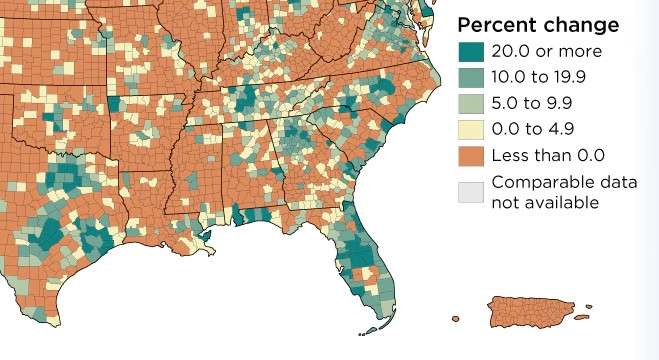 This section of a Census Bureau map shows population changes from 2010 to 2020 in U.S. counties, including counties in Central Florida.

The population of Central Florida, including Marion County, grew by 21%  from 2010 to 2020, according to the latest census numbers.

The counties had more than five million of Florida’s 21.5 million residents in the 2020 Census.

For that, Census Bureau demographer Marc Perry singles it out.

“The Villages, Florida, was the country’s fastest growing metro area this decade, up 39 percent from 2010,” he said during a Census Bureau press conference.

The Villages retirement community itself — but not the metro area — is also in Lake and Marion counties.

As a county, Sumter is nowhere near the fastest growing. Tiny McKenzie County in North Dakota grew by 131 %.

And in Central Florida, Osceola County grew by 45% to nearly 390,000 people in the official tally.

Lake, Orange, and Polk counties all grew by at least 20 percent.

Here’s a county-by-county breakdown from the 2020 Census: