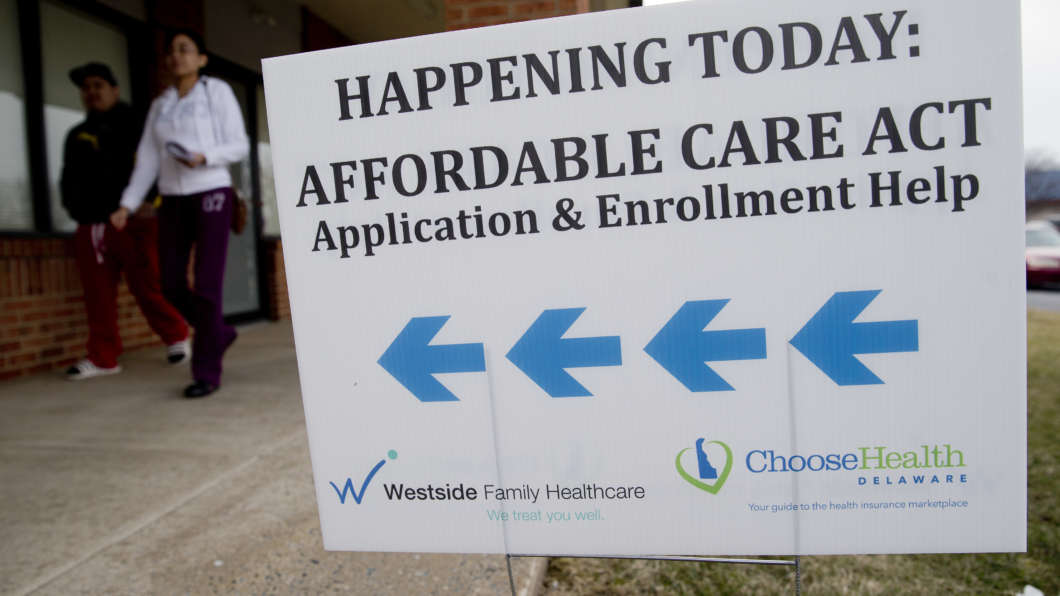 Enrollment help was plentiful for insurance sign-ups in the early years of the Affordable Care Act, such as at this clinic in Bear, Del., in 2014. Though the Trump administration has since slashed the outreach budget, about 930,000 people have signed up for ACA health plans so far this year.
Image credit: Andrew Harrer

During Wednesday night’s Democratic presidential debate, candidates touched on “Medicare for All,” “Medicare for all who want it” and other ways to reform the American health system.

But in the backdrop, it’s once again sign-up season for Affordable Care Act health plans.

Despite repeated efforts by Republicans in Congress to undo the ACA, the controversial law’s seventh open-enrollment period launched earlier this month to relatively little fanfare. It ends Dec. 15.

Individual plans for 2020 are cheaper — premiums are lower, on average, and in some areas, people who qualify for government subsidies could end up with no monthly payment. Do check the fine print of your policy — in some cases, the patient’s share of other costs may have gone up.

Meanwhile, a pending court case threatens to overturn the entire law, with no clear replacement plan in the works. The result has been a cloud of confusion and misunderstanding — some even say misinformation — about the availability of this health coverage.

Here’s what consumers need to know.

The ACA is intact — at least for now.

The Affordable Care Act is still the law of the land.

The GOP-led Congress gutted a key part of the law — the penalty for the so-called individual mandate — that required everyone to have coverage. But other key tenets of the ACA remain in place, including the individual marketplace it created where people can shop for health coverage.

You might not hear much about that this year. The Trump administration has dramatically scaled back its outreach and marketing budget for open enrollment — allotting about $10 million for such efforts, compared with the more than $100 million the Obama administration spent.

Lack of outreach, combined with Republican efforts to overturn or undermine the law, could give consumers a wrong impression, says Katie Keith, a health policy consultant who frequently writes about the health law.

So far, about 930,000 people have signed up for coverage. That’s still slightly lower than where things were last year — and first-day Website glitches may have played a role, suggests Sabrina Corlette, a research professor at Georgetown University’s Center on Health Insurance Reforms.

In week two of the sign-up period, enrollment was about 10% below what it was in last year’s second week – but the number of new customers has gone up.

“The irony is, things are really stable, and depending on your state, you can really save,” Keith says. “Without advertising and information, folks are going to miss out on the deals they could get.”

You can get a cheaper plan this year, but it will probably require a bit of work.

Those deals can be pretty significant. On average, premiums are down 4% nationally over last year for silver-level plans sold through the federal marketplace. In some states, they’re even cheaper.

Many people don’t realize that if their incomes are below 400% of the federal poverty level (just under $50,000 for an individual or about $103,000 for a family of four) they qualify for federal subsidies — tax credits that help them pay for individual marketplace plans, Corlette says. The federal government has an online calculator that indicates if you fit into this bracket.

That tax break can make it easier to find affordable, comprehensive coverage, Corlette says, and she recommends that people who already have 2019 ACA plans shop around the marketplace to make sure they get the best deal going into 2020. (What plans charge can change each year.)

People who bought coverage last fall and don’t shop around will be automatically reenrolled in those health plans — which may not be the best for their needs and may be more expensive than other options.

Also worth noting: Federal courts recently blocked a rule that would have penalized recent legal immigrants who use those subsidies. Known as the “public charge” rule, it would have counted that subsidy against people looking to stay longer in the United States.

The court ruling means that, at least for now, legal immigrants should also be able to purchase subsidized health insurance with no penalty, Corlette says.

“If you have concerns or are worried, you should consult an immigration attorney. But assuming you are a legal resident, nothing has changed in terms of your entitlement,” she says.

Not everything that looks like an ACA plan actually is one.

Consumers should be wary of plans that look like they meet ACA standards but actually fall short.

The Trump administration has loosened restrictions on non-ACA policies — “short-term plans” — so that they can last up to 12 months. (Previously they lasted only three months and were treated as bare-bones, stopgap insurance.)

Pitched as a cheaper alternative to ACA coverage, they are allowed to factor in preexisting medical conditions — and can deny insurance to people because of their medical history. They also generally cover a much narrower range of benefits. Some have lifetime caps on benefits, and they typically don’t cover prescription drugs.

These plans are not eligible for federal subsidies.

“If you were to Google something like ‘ACA plan’ or ‘Obamacare plan,’ the first results will return insurances that are not ACA coverage,” Corlette warned. “A lot of it is going to be junky, skimpy coverage.”

One easy way to distinguish ACA-compliant plans from others: Make sure you’re shopping through healthcare.gov or an alternative set up by some states. Consumers who work with an insurance broker should be sure to communicate their desire to choose an ACA-compliant plan.

Meanwhile, federal courts are weighing a legal challenge that could strike down the ACA.

It’s not clear what would happen if that attempt to overturn the federal health law succeeds. But, for now, the case shouldn’t affect your coverage decisions, all sides agree.

A group of Republican attorneys general and governors filed a lawsuit in 2018 that argues that since the Supreme Court upheld the ACA in 2012 specifically because its individual mandate was deemed a valid exercise of Congress’ taxing power, reducing that tax to zero — as Congress did — makes the entire law unconstitutional. It’s an argument that many legal experts say is shaky, but a federal judge in Texas agreed with those who brought the suit.

The case, known as Texas v. Azar, is awaiting a ruling from the 5th Circuit Court of Appeals. The Trump administration, meanwhile, has declined to defend the federal health law. A group of Democratic attorneys general has stepped in, in their stead.

If the appellate court sides with the trial judge to overturn the ACA, the decision would likely be stayed and the case appealed to the Supreme Court. That could drag things out until next summer at the earliest.

The administration hasn’t indicated what it might do if the health law is struck down — a scenario that would gut the individual marketplace and eliminate the ACA’s consumer protections. But most experts agree it is also not likely to affect the 2020 coverage year.

Earlier this month, Joe Grogan, who heads the White House’s Domestic Policy Council, reiterated that the administration “will be prepared after that decision comes down” — adding that “nothing’s going to happen immediately.”

“This will surely go to the Supreme Court,” Grogan said. “It may or may not be decided — probably not decided — before the election.”

But it’s unclear what a White House response would involve. Neither President Trump nor Republicans in Congress have put forth a health care proposal that would maintain the protections the Affordable Care Act put in place.

That could be worrisome down the line, Keith and Corlette say. But any impact is far enough away that it shouldn’t influence the way consumers choose health insurance for the next year.

“Nothing will change right away, and it shouldn’t affect anybody anytime soon,” Keith says. “Go enroll. Pay your premiums.”

Emmarie Huetteman contributed to this report.