2020: A Banner Year For Space Exploration 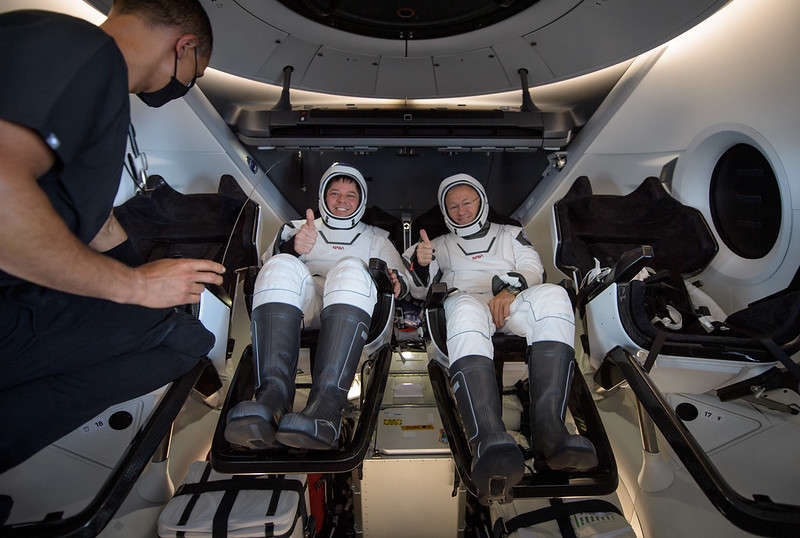 NASA astronauts Robert Behnken, left, and Douglas Hurley are seen inside the SpaceX Crew Dragon Endeavour spacecraft onboard the SpaceX GO Navigator recovery ship shortly after having landed in the Gulf of Mexico off the coast of Pensacola, Florida, Sunday, Aug. 2, 2020. The Demo-2 test flight for NASA's Commercial Crew Program was the first to deliver astronauts to the International Space Station and return them safely to Earth onboard a commercially built and operated spacecraft. Behnken and Hurley returned after spending 64 days in space. Photo Credit: (NASA/Bill Ingalls)

2020 was a banner year for space exploration. In May, NASA returned to human spaceflight from the US for the first time in nearly a decade, with the liftoff of Bob Behnken and Doug Hurley from Kennedy Space Center.

“It was really surreal, and it was kind of emotional,” said Speck.

“Everyone was cheering and clapping, it was very, very exciting, but it was also stressful, you know, you can never forget that these are two men with families, they’re dads, have young sons and so much work has gone into making sure that they went to space safely and returned home safely.”

2020 also saw success in deep space exploration, including a robotic mission to snag dust from an asteroid millions of miles from Earth.

But the year also brought disaster to the astronomical community, with the sudden collapse of part of the giant Arecibo observatory in Puerto Rico.

Supporters of the observatory say rebuilding it would show support for science- and for Puerto Rico.

WMFE’s space reporter Brendan Byrne says there are calls to rebuild the telescope.