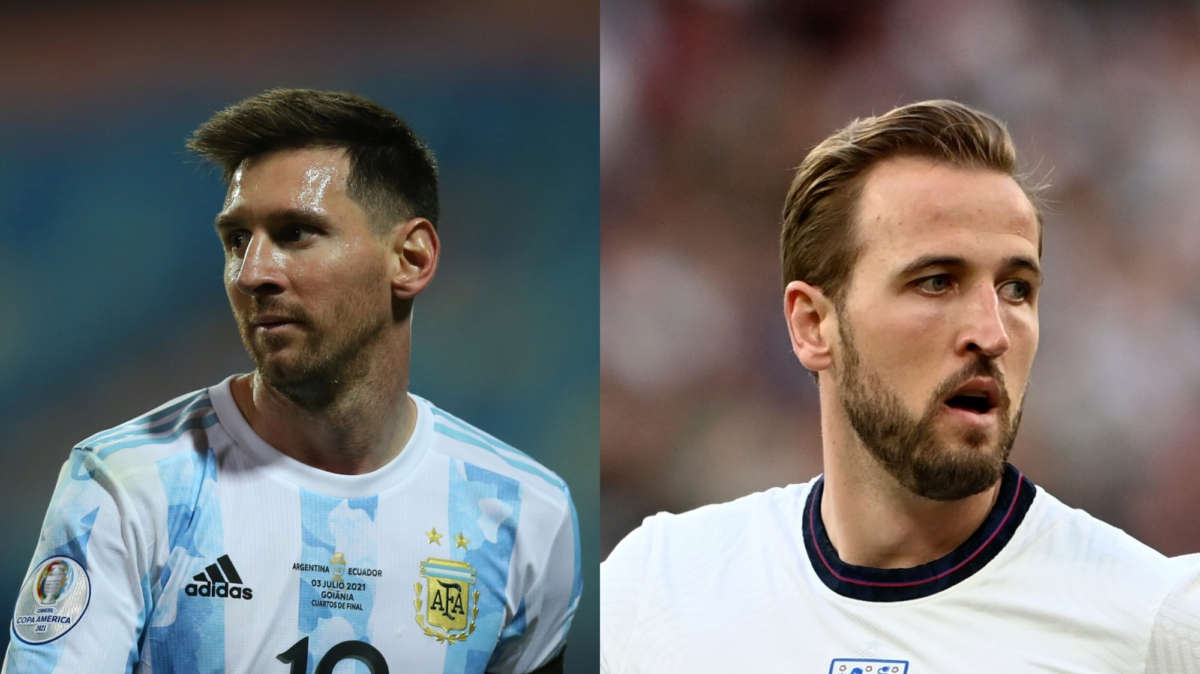 Argentina is pinning their hopes on Lionel Messi (left), while Harry Kane is carrying England's hopes on his shoulders.

England and Argentina may be two soccer-obsessed nations with world-class talent and tradition, but for fans of the two men’s national teams, the past decades have been defined most by heartbreak.

Neither has won a major tournament in decades, a fact that could change this weekend when both the Argentinian and English squads compete in international title games — the Copa America and Euro 2020, respectively.

The South American championship, which kicks off at 8 p.m. ET in Rio de Janeiro, features two bitter rivals with decades of history and two of the most talented players of their generation: Argentina’s Lionel Messi and Brazil’s Neymar.

In an interview with NPR’s All Things Considered, Brazilian sports commentator Mauricio Noriega noted the two are friends — they played together on FC Barcelona — but the Brazil-Argentina rivalry is “a little spicy.”

“The Brazilians and the Argentinians, they are neighbors, and they do OK all the time,” Noriega said. “But when you talk about soccer, it’s something like the third war.”

A win for Argentina would not only provide Messi his first international title, but it would also end a 28-year championship drought for La Albiceleste, as the team is known.

During that period, Argentina has played — and lost — in four Copa America title matches and the 2014 FIFA World Cup final. Brazil, meanwhile, returns to defend its title after winning the last South American championship, in 2019, over Peru.

Don’t go breaking my heart: Three of Argentina’s four Copa America title match losses came in penalty kicks, and their 2014 World Cup loss to Germany went to extra time. Fans of La Albiceleste may be praying for a victory in 90 minutes.

Fans of the English men’s national team have waited 55 years to return to an international title match, and Sunday’s final — which kicks off at 3 p.m. ET — grants a chance to make good on the phrase English fans have been singing since 1996: “Football’s Coming Home.”

For Italy, a win would deliver redemption after failing to qualify for the 2018 FIFA World Cup. As for the English, five-plus decades of international agony could come to a close in front of a home crowd at London’s Wembley Stadium.

Don’t go breaking my heart: Soccer analyst Grant Wahl told NPR’s Morning Edition that the English have “a history of failure” in the biggest moments, the latest heartbreak coming in a 2018 World Cup semifinal loss to Croatia.

But there’s reason for optimism: “They have a lot of talent,” Wahl said. “In recent years, England has won the Under-17 World Cup, the Under-20 World Cup on the boys’ side. This talent has really shown well in the last few years at the senior level.”

Will the English finally make mince of the refrain — a la Ted Lasso cribbing from John Cleese — “It’s the hope that kills you”?