2 Green Bay Packers Fans Chat Behind The Tiny Desk, And One Of Them Is Harry Styles 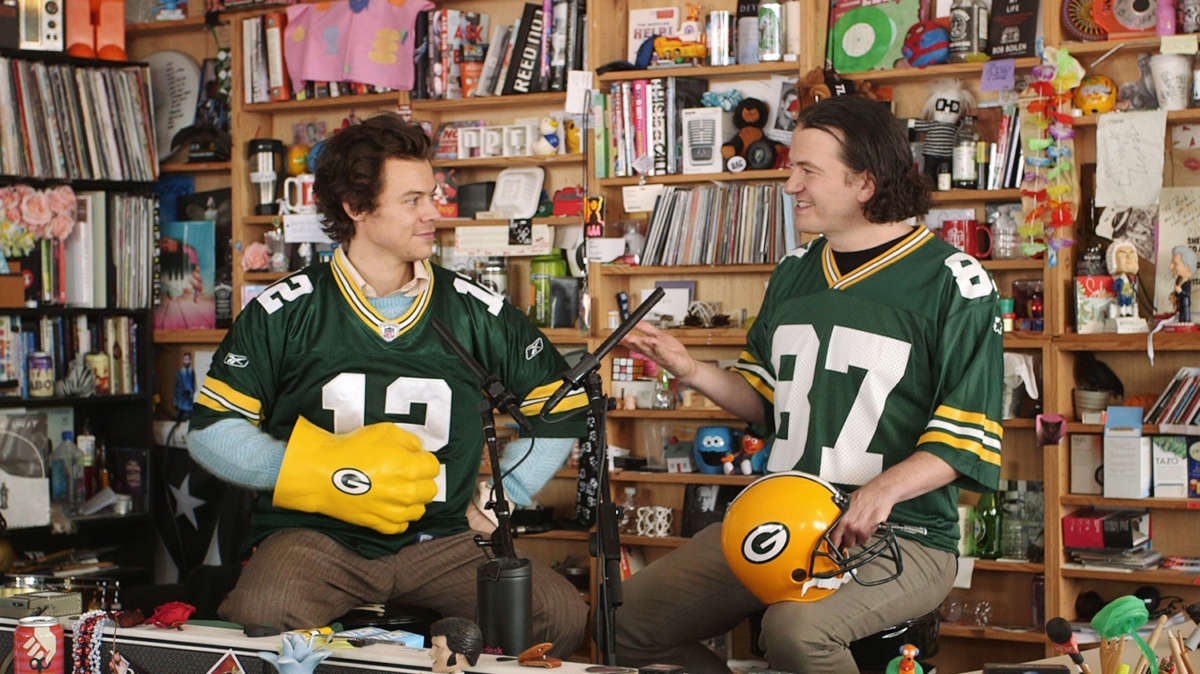 In just three days — that’d be first thing Monday morning — NPR Music will publish a hotly anticipated Tiny Desk concert by English pop superstar Harry Styles. To tide you over until the big event, we thought we’d share a little pregame entertainment, in which the former One Direction singer hangs out behind the Tiny Desk and talks about his favorite American football team.

That would, of course, be America’s Team — the community-owned bastion of righteousness known as the 13-time world champion Green Bay Packers. Styles, it turns out, is enough of a Packers fan that he has the team’s logo tattooed on his left upper arm. Which led me, as NPR’s most boorish Packers enthusiast, to grab Styles for a little one-on-one conversation about how that ended up happening.

In anticipation of your thoughts on this matter, I’ve whipped up a little FAQ for you:

“Wait, why are you doing this again?” (Because it turns out that Harry Styles is a patient and agreeable all-around good sport.)

“Shouldn’t NPR be reporting on the issues of the day instead of asking Harry Styles about the Green Bay Packers?” (We are!)

“Why don’t you just publish the Harry Styles Tiny Desk concert now instead of making us wait until Monday?” (Because we’re rascals.)

“I know #12 is Aaron Rodgers, but who’s #87? Is that a Jordy Nelson jersey, or are you repping for tight end Jace Sternberger?” (With all due love and respect to Nelson and Sternberger, the #87 in this case is for Robert Brooks, the wide receiver who popularized the Lambeau Leap in the ’90s.)

“When Harry Styles refers to the Packers’ logo being similar to that of Georgia State, he means the University of Georgia, right?” (Right.)