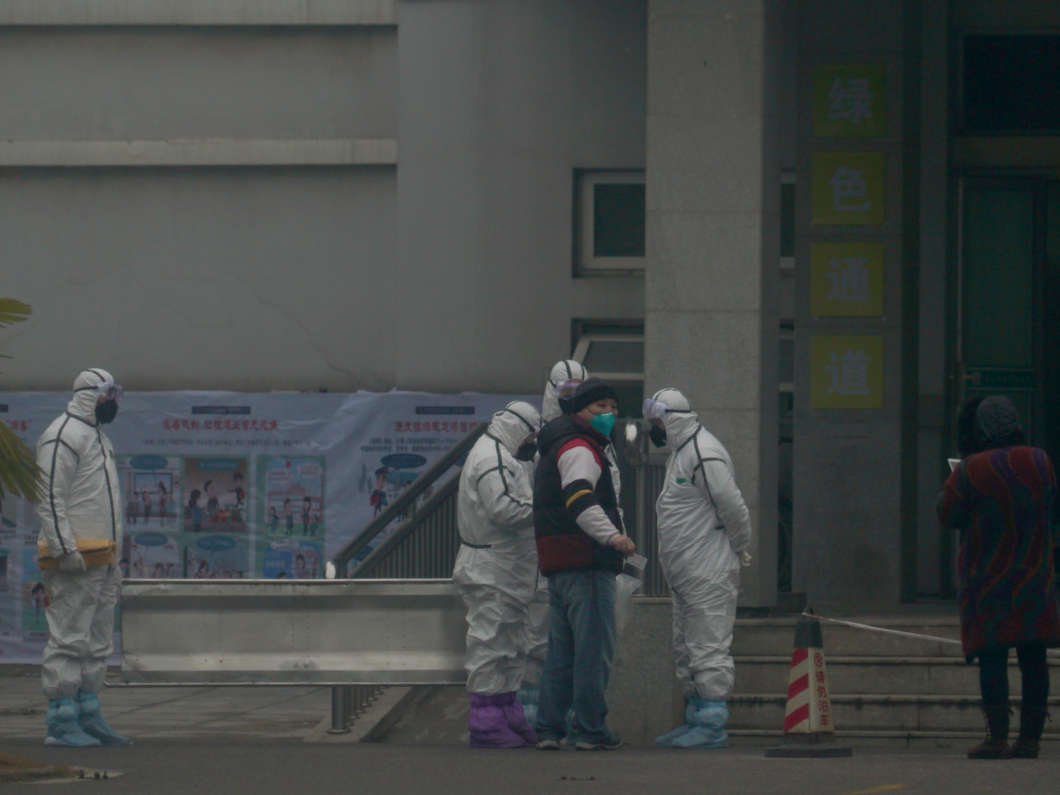 Staff in biohazard suits hold a metal stretcher on Tuesday by the inpatient department of Wuhan Medical Treatment Center, where some people infected with a novel coronavirus are being treated in China.
Image credit: Dake Kang

The first case of an infection with the new coronavirus has been discovered in the United States.

A man from Washington state returned home after a trip to Wuhan, China, on Jan. 15, sought medical attention on Jan. 19 and now is in isolation at Providence Regional Medical Center in Everett, Wash.

State health officials say his condition is quite good and even referred to him as “healthy.” But testing from the Centers for Disease Control and Prevention on Jan. 20 confirm that he is infected with the Wuhan coronavirus. The man arrived back in the U.S. prior to the implementation of screening at three domestic airports on Friday.

About 300 cases of the virus and six deaths have been reported in China, and health officials there and around the world are ramping up precautions to stem the spread.

Chinese authorities are trying to control the flow of people in and out of the eastern city of Wuhan, where a strain of the coronavirus was discovered last month. Wuhan’s mayor has asked residents to stay in the city to try to prevent the spread of the virus, which can cause respiratory symptoms such as pneumonia.

“Cars may be randomly tested in case wild animals, a potential source for the virus, are transported, and tour groups are prohibited from leaving the city,” NPR’s Amy Cheng reports from Beijing.

Cases of coronavirus, named 2019-nCoV, have also been confirmed in Japan, Thailand and South Korea.

Many airports around the world, including three in the U.S. — JFK in New York, SFO in San Francisco and LAX in Los Angeles — are setting up additional security screenings for passengers coming from infected areas.

At a press conference on Tuesday afternoon, the CDC said that it’s expanding the screenings to include Chicago’s O’Hare and Atlanta’s Hartsfield-Jackson international airports and that any passengers originating from Wuhan into the U.S. will be funneled to one of the five airports with screening, even if this requires rebooking them on different flights.

Other nations are taking similar precautions. Russia, India and North Korea have all started checking people for fever on inbound flights from China. Australia and the Philippines are also checking passengers and have quarantined some suspected cases.

The rising international concern about the coronavirus comes ahead of Lunar New Year, a major holiday in China during which millions of people travel across the country and internationally.

Wuhan authorities are testing whether passengers have fevers at transportation terminals throughout the city using 35 stationary infrared thermometers and more 300 handheld ones, according to China’s Xinhua news agency. Passengers set to travel to Wuhan are being offered free ticket cancellations or changes.

“The Wuhan airport, it’s like a war zone because it’s all controlled with all the security, all the medical staff,” Linfa Wang, a virologist at Duke-National University of Singapore, tells NPR. “You line up and then you go through group by group.”

The World Health Organization says the virus likely first spread to humans through transmission from an animal at a live animal market in Wuhan.

On Monday, a Chinese government epidemiologist said there was evidence the virus could be transmitted from human to human. The coronavirus is also raising concerns because it has spread in medical environments – among people who are likely taking appropriate precautions to avoid infection.

Chinese authorities have come up with a new test for diagnosing the virus and are calling on people to take measures to prevent its spread such as covering their mouths when coughing or wearing face masks. These masks are reportedly selling out in stores and online retailers in the country.

Wang says this virus is also concerning because there are still many aspects that aren’t well understood by health officials. “The enemies are in the dark, and we don’t know them,” he says. “This new coronavirus is in the same family as SARS, but it’s different from SARS.”

SARS, which is short for severe acute respiratory syndrome, killed nearly 800 people during an outbreak in 2003.

The World Health Organization has scheduled a meeting for Wednesday to weigh whether the coronavirus should be declared an international public health emergency.

Wang expects the idea of travel restrictions to be discussed. “It’ll be a tough decision, and I don’t want to be the person to make that decision,” he says, given the sheer number of people on the move during the Lunar New Year holiday.