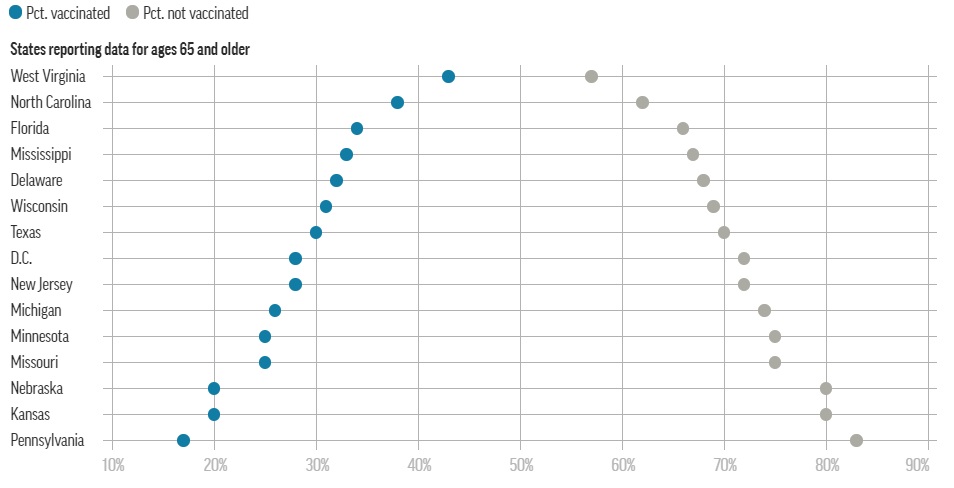 See how Florida ranks in getting its 65 and up population . (Photo vis Associated Press graphic)

Florida recorded 3,787 new COVID-19 cases on Monday – the lowest daily count in at least a month.

Florida is now averaging 7,056 cases per day in the last week, compared to an average of more than 10,275 daily cases two weeks ago. That’s a 31 percent drop, according to data from Johns Hopkins University analyzed by NPR.

Another promising statistic: More than 1 million Floridians have been completely vaccinated against COVID-19.

Florida’s vaccination numbers are improving, and retailers like Walmart, Publix, Sam’s Club and Winn Dixie have come online in the last week offering vaccines to Floridians 65-and-up. Those new allocations take time to be reflected in state reports.

Just shy of 5 percent of Florida’s population is immunized. Florida still has a long way to go to get to the 70 to 80 percent needed for herd immunity.

On the downside, the death rate is still high in Florida, averaging more than 153 deaths per day in the last week. Deaths are a lagging statistic, though.

Florida continues to lead the U.S. with the most cases of the B.1.1.7. variant first found the U.K.: 379 in Florida. That variant appears to be more contagious and early scientific literature suggests it could be more deadly as well.

ORLANDO, Fla. (AP) — A student at the University of Central Florida has been diagnosed with a variant of the coronavirus first found in the United Kingdom and thought to be more easily transmissible.

It’s time to double-down and Armor Up 😷⚔️

The UK COVID-19 variant has a strong foothold in Florida. This week, we learned that this strain is on our campus, with a report of one student case. UCF has enacted our standard contact tracing and isolation processes.

As states continue to roll out vaccination efforts, some states have made age demographic data available for those who have received at least one shot.

This data shows that while some states are making progress in vaccinating older Americans, other states are lagging. This chart is current as of February 9, 2021 and will not update.

Passengers arriving at London’s Heathrow Airport on Monday morning were escorted by security guards to buses that took them to nearby hotels. Under the new rules, people arriving in England from 33 high-risk countries must stay in designated hotels for 10 days at their own expense.

Britain has given a first vaccine shot to over 15 million people, almost a quarter of the population. But the hotel quarantines were put in place because health officials are concerned that vaccines may not work as well on some virus variants, including one identified in South Africa.