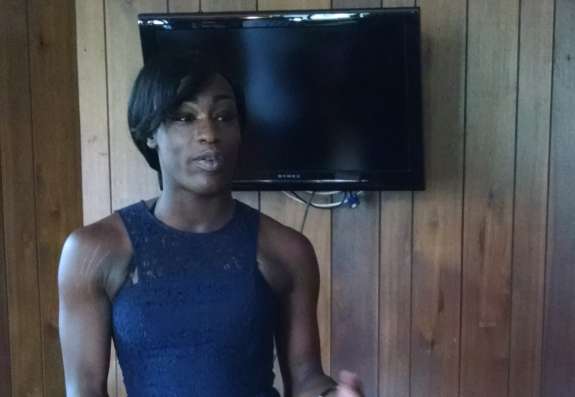 Davinnie is scared of horses, but loves unicorns. And she sometimes snaps when she talks.

Davinnie holds up a selfie taken in one of her multiple prom dresses.

“I had a couple outfit changes,” Davinnie said. “My performance outift, my walk-around, my entrance outfit, I have to be on point for prom. That’s just one of those things for a showgirl.”

Just one of Davinnie’s prom dresses.

Davinnie is a trangender teen, just 18 years old. Davinnie is not her born name, it’s the name she’s chosen as a woman.

On the day of our interview, Davinnie wore a navy blue dress, gold wedge sandals, gold-toned eyeshadow. On her wrist, a black wristband says “speak out.”

It’s part of a campaign to get people talking about HIV.

Like many transgender youth, Davinnie faced an ultimatum from her parents at age 15: Stay home and identify as a man, or move out. She left, and moved in with a boyfriend. She then turned to what experts call survival sex.

“If I was doing sex work, that’s the only way I could stay with this dude,” she said. “I had to perform sex work for a good year and a half.”

Life wasn’t easy. Depending on which Jacksonville neighborhood she was in, she could either be solicited – or face violence. She’s been robbed at gunpoint.

It wasn’t sex work that exposed Davinnie to HIV. She says she was infected after she got out, back on her feet and had reunited with her parents. Another unfaithful boyfriend is to blame.

When Davinnie got a positive HIV test result, she already was active in Jacksonville Area Sexual Minority Youth Network, or JASMYN, the group that put on the prom.

Still, the diagnosis sent her off the grid, for months. But JASMYN staff kept reaching out.

The JASMYN center sits just outside downtown Jacksonville, underneath Interstate 95, just before the road turns at a strangely beautiful but abandoned public school.

The only clue the turn-of-the-century home with a wraparound porch is a nonprofit is a small, rainbow flag sticker in the window that says “safe space.”

Emily Rokosch, director of operations, said there are 400 youth enrolled in JASMYN programs. And about 40 of them are HIV positive.

The nonprofit took over the adjacent house, and built an $85,000 clinic. The eventual goal is to expand into primary care, including transgender services.

“Every Thursday, young people can come here and have access to free HIV testing and STI testing,” Rokosch said.

Davinnie was underage when she got into treatment. She hadn’t told her parents, and JASMYN shuttled from appointment to appointment.

Lamont isn’t his real name. Members of his family don’t know that he’s a gay man or that he has HIV.

Lamont, like Davinnie, contracted HIV from an unfaithful partner. He was 17, his boyfriend 24. They met though a site called BCG Live.

They got serious, and they both took down their profiles. And they stopped using condoms.

Hindsight being 20-20, there were signs of infidelity. Lamont’s boyfriend wanted threesomes. He changed the password on his phone, and didn’t answer when Lamont knew he was off work. Mysterious cousins and friends started popping up.

Then a friend confided that he’d seen Lamont’s boyfriend on an app called Jack’d. It shows gay men looking to hookup near your location.

Lamont ended the relationship. Then he spent the next four months too scared to get an HIV test.

He finally went to The Center in Orlando, an LGBT testing center. He was calm when he got the diagnosis. But afterwards, he had suicidal thoughts.

“I really thought about going up at a high rate of speed and trying to flip my car over,” Lamont said. “I had to really come to my senses.”

Many experts will tell you part of the reason more youth are contracting HIV is because attitudes are changing. New drugs mean that HIV isn’t a death sentence.

But that isn’t Lamont’s world. He knew how you contract HIV, knew that if you don’t take your medications, it becomes AIDS.

And he’s known five friends who died from the disease in the last four years. Some refused to ever get tested, others got tested and never got treatment, scared of what their peers would think.

That’s why it hurt him so bad when his boyfriend cheated on him.

That’s why testing is so important, he said.

“I don’t wish it on anyone,” Lamont said. “That’s why I really wish people would wrap it up, talk about it. Knowledge is power.”

Lamont is working on getting an apartment, and wants to get into law enforcement for a career. He wants to find a happy, faithful relationship.

He’s talking to someone now. Just talk so far, but Lamont is really into this guy.

He just doesn’t know how to bring up that he’s HIV positive.