17 People Died In The Parkland Shooting. Here Are Their Names 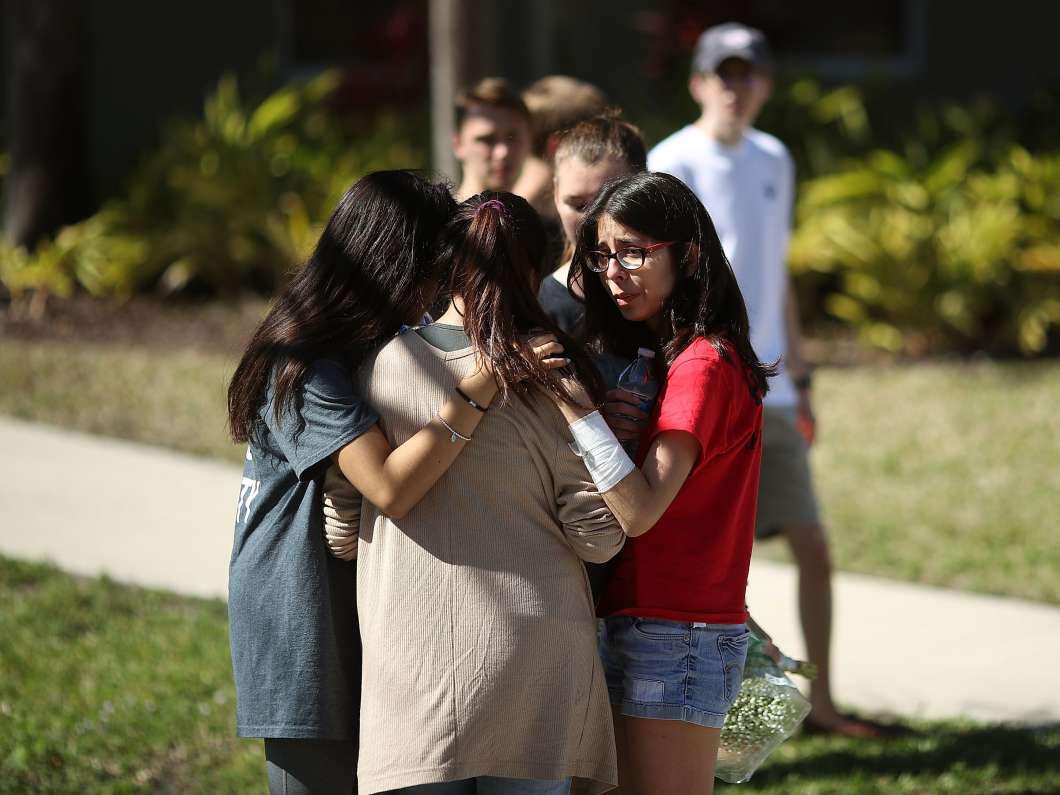 Students of Marjory Stoneman Douglas High School gather on Thursday in Parkland, Fla. Fourteen students and three staff members were killed in a shooting at the school on Wednesday.
Image credit: Mark Wilson

In the shooting Wednesday at Marjory Stoneman Douglas High School, 17 people were killed. Three were on the staff as coaches or teachers; 14 were students. On Thursday afternoon, the Broward Sheriff’s Office identified them.

Here are their names.

Alyssa was 14. In a Facebook post, her mother said Alyssa was a talented soccer player and creative writer and had an amazing personality, the Sun-Sentinel reports.

“I just spent the last two hours putting the funeral arrangements for my daughter’s funeral, who’s 14,” Lori Alhadeff said in an interview on CNN. “President Trump, please do something. Do something! Action! We need it now! These kids need safety now!”

The summer camp she attended in northern Georgia also shared the news of her death. “May Alyssa’s memory forever be for a blessing,” Camp Coleman posted.

Beigel, 35, was a geography teacher and the school’s cross-country coach.

He was killed after he unlocked a door to allow students in to hide from the shooter, according to the Sun-Sentinel:

” ‘He unlocked the door and let us in,’ Friend said. ‘I had thought he was behind me, but he wasn’t. When he opened the door, he had to re-lock it so we could stay safe, but he didn’t get the chance to.’

” ‘He was in the doorway and the door was still open and the shooter probably didn’t know we were in there because he was lying on the floor. If the shooter had come in the room, I probably wouldn’t be [alive].’ “

“Mr. Beigel was my hero, and he still forever will be my hero,” Friend told CNN. “I will never forget the actions that he took for me and for fellow students in the classroom.

“If his family is watching this,” she said through tears, “please know that your son or your brother was an amazing person and I’m alive today because of him. Thank you for bringing and having this amazing person in life, and giving him the power to be stronger than I could have ever been. … I will not let this shooting go down as another one.”

Martin, 14, was a freshman at the school, according to the Miami Herald.

“Words can not describe my pain,” his brother Miguel wrote on Instragram. “I love brother Martin you’ll be missed buddy. I know you’re in a better place. Duques forever man I love you junior!!! R.I.P Martin Duque!”

Nicholas, 17, was a senior at the school.

Andre Bailey, head coach at Dworet’s swim club, told The Indianapolis Star that the swimmer made huge strides in his life in the last 18 months: working hard at school and in the pool.

Nicholas had just earned an academic scholarship to the University of Indianapolis and had committed to its swim team in the fall.

“I’m telling you from the bottom of my heart, he just took his life in his hands and he chiseled and molded his life,” Bailey told the Star:

” ‘This is a kid who went from middle of the pack last year to being just lights out,’ Bailey said. ‘He helped put our program on the map.’

“Nicholas was a team captain known as the ‘swim daddy’ for the way he helped teammates train and practice.

” ‘Everybody loved him,’ Bailey said.”

Feis, 37, graduated from Douglas High School in 1999 and had been an assistant football coach at the school since 2002, the ­Sun-Sentinel reported. He had worked as a security guard at the school for at least eight years.

He reportedly died from wounds he sustained while shielding students from bullets.

“He was a great guy,” sophomore Douglas lineman Gage Gaynor told the Sun-Sentinel. “Everyone loved him. Shame he had to go like this. Always gave his all to making us better. Definitely learned a lot from him.”

“My heart is broken,” her father, Fred Guttenberg, wrote on Facebook, according to the Miami Herald. “Yesterday, Jennifer Bloom Guttenberg and I lost our baby girl to a violent shooting at her school. We lost our daughter and my son Jesse Guttenberg lost his sister. I am broken as I write this trying to figure out how my family get’s through this. … Hugs to all and hold your children tight.”

Speaking at a candlelight vigil held Thursday night, Fred Guttenberg spoke of Jamie in a moving tribute: “I sent her to school yesterday, and she was supposed to be safe,” he said choking back tears. “My job is to protect my children, and I sent my kid to school.”

Hixon, 49, was fatally injured after he raced to the scene of the shooting to try to help students, the school’s head football coach told NPR.

Hixon was the wrestling coach, along with his role as athletic director. “It’s hard to be AD and a coach but he did it because he just loved it so much,” says Willis May Jr. Hixon loved being with the students — “he’d get out there and wrestle with them.” May described Hixon as a “great man” with a “great sense of humor” who loved his family. He added that Hixon was very proud of his military background.

Jason Stein, athletic director at neighboring Taravella High School, told the Sun-Sentinal that Hixon was survived by his wife and a son with special needs.

“It is devastating,” Stein told the newspaper. “His son was with him everywhere. Chris epitomized what an athletic director was all about.”

Luke, 15, played basketball and was an NBA fan — and he was quiet but happy, his cousin Grant Cox told The New York Times.

“I know Luke loved his family,” Cox said. “He had a huge heart.”

Cara was 14 and loved the beach, according to the Times.

“We are absolutely gutted,” her aunt, Lindsay Fontana, wrote in a Facebook post seen by the newspaper. “While your thoughts are appreciated, I beg you to DO SOMETHING. This should not have happened to our niece Cara and it cannot happen to other people’s families.”

Gina was 14 and a member of the school marching band’s winter guard, the Sun-Sentinel reports.

Joaquin was 17. He moved with his family to the U.S. from Venezuela when he was 3, the Herald reports.

Friends told the Times that he played basketball in a city rec league and loved to write poetry.

Alaina was 14, according to a Facebook post by her church in Coral Springs. It said that another member of the church had been shot twice but was expected to recover.

“It is impossible to sum up all that Alaina was, and meant, to her family & friends,” the family wrote in a statement to the Herald. “Alaina was a vibrant and determined young woman, loved by all who knew her.”

She was in the JROTC and helped with a Church of Jesus Christ of Latter-day Saints cleanup of the Florida Keys after Hurricane Irma, the statement said.

Meadow, 18, was a senior who planned to attend Lynn University in Boca Raton, Fla., in the fall, The Herald reports.

“She was just unbelievable,” her father, Andrew Pollack, told the Times. “She was a very strong-willed young girl who had everything going for her.”

Alex, 14, played trombone in the marching band, the Times reports.

His father told the Times that he was “a sweetheart of a kid” who “just wanted to do well and make his parents happy.”

His older brother, also a student at Douglas, survived the shooting.

Carmen, 16, was a standout student. In September she was named a National Merit Scholarship semifinalist.

Peter, 15, was in the [J]ROTC program, according to the Herald. His cousin told the newspaper that Peter was in study hall when the shooting began and that he had been holding a door so others could escape.

His family reportedly owned a Chinese restaurant and was preparing to celebrate Chinese New Year on Thursday.