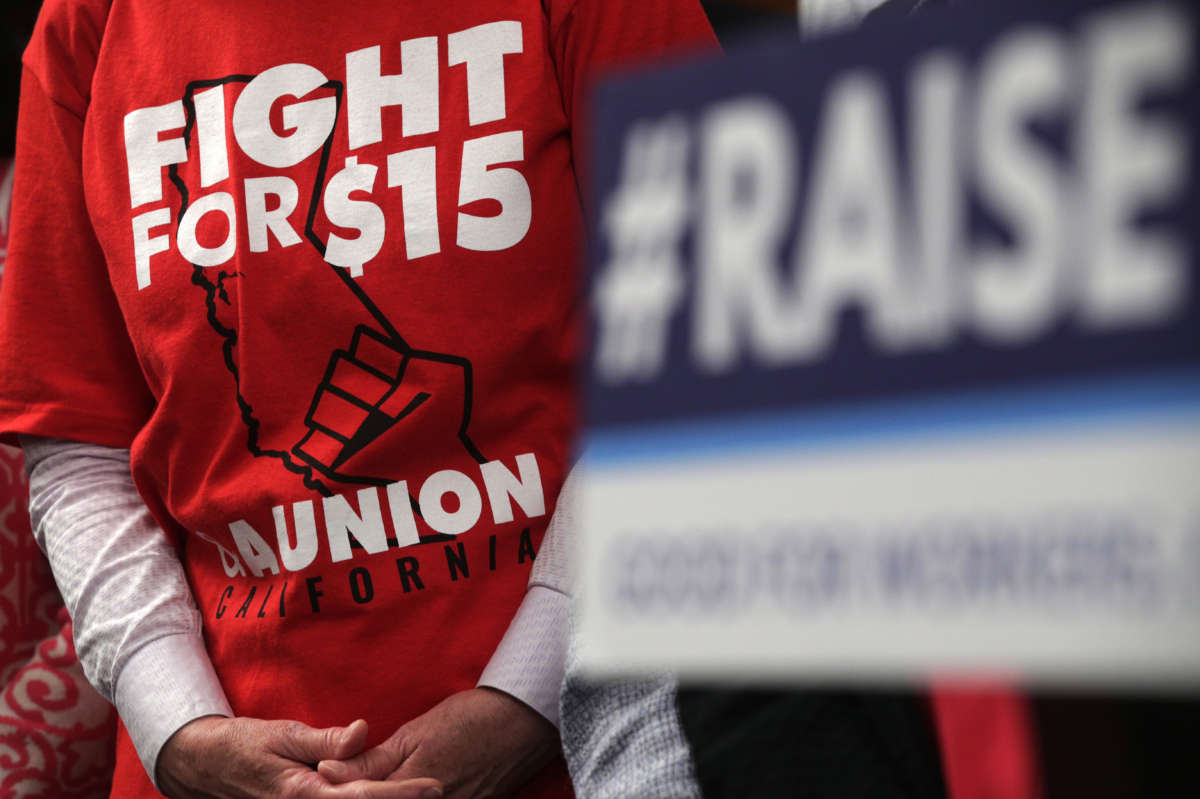 An activist wears a "Fight For $15 and a Union" t-shirt at the U.S. Capitol in 2019 as lawmakers took on legislation to raise the federal minimum wage.
Image credit: Alex Wong

Raising the federal minimum wage to $15 an hour by 2025 would increase wages for at least 17 million people, but also put 1.4 million Americans out of work, according to a study by the Congressional Budget Office released on Monday.

A phase-in of a $15 minimum wage would also lift some 900,000 out of poverty, according to the nonpartisan CBO. This higher federal minimum could raise wages for an additional 10 million workers who would otherwise make sightly above that wage rate, the study found.

Potential job losses were estimated to affect 0.9 percent of workers, the CBO wrote, adding: “Young, less educated people would account for a disproportionate share of those reductions in employment.”

President Biden has advocated for a gradual increase of the federal minimum over several years. The threshold has been stuck at $7.25 an hour since 2009. Dozens of states and cities have surpassed that level; several are already on track to $15 an hour.

Democrats in Congress have vowed to push ahead on raising the federal minimum, although the efforts to include the $15 minimum plan in coronavirus relief legislation have stalled.

Last week, the Senate approved by voice vote a measure prohibiting an increase of the federal minimum wage during the global pandemic. Biden had included a plan to phase in the $15 wage in his COVID aid proposal, but later said he didn’t expect it to survive Senate budget negotiations.

The CBO’s report on Monday echoed a similar one in 2019, when the agency assessed the impact of a similar bill to raise the federal minimum to $15 by 2025. At the time, the Raise the Wage Act passed in the Democrat-controlled U.S. House of Representatives but failed to gain traction in the Republican-controlled Senate.