120,000 Veterans in Florida Might Lose Their Food Stamps if a Government Shutdown Continues Past Next Month 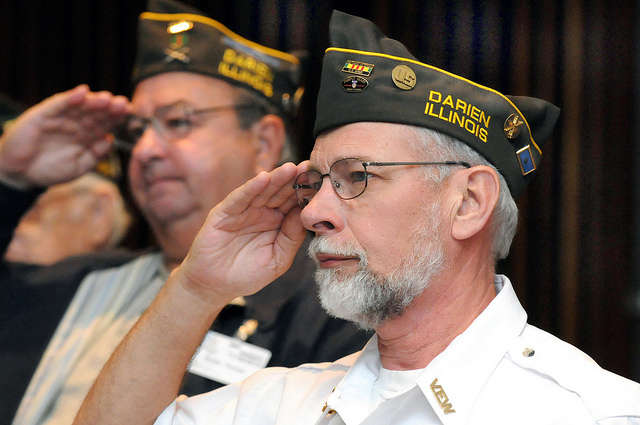 One of the federal programs affected by the partial government shutdown is the Supplemental Nutritional Assistance Program, or SNAP. If the shutdown continues into March, funding for the program could run out. And in Florida that means a lot of low-income and homeless veterans may have to fend for themselves. More veterans in Florida rely on food stamps than any other state.

A line of older sedans and minivans has started to form while the volunteers were working. Cristina Mercado who runs the VA pantry says donations from nonprofits Soldiers’ Angels and Second Harvest can only feed 200 veterans so spots have been going fast.

“Within 2 hours, 153 people signed up on our list and within a day and a half the list was completely filled up. And then within a few days after that, our wait list also filled up. So this was the quickest [sign-up] so far.”

Mercado says demand for the food bank has grown since the fall. That’s partly because of an influx of veterans coming from Puerto Rico after Hurricane Maria.

“We had a huge base of people coming into the Central Florida area, into our catchment”

Veterans use food banks like this one to supplement their food stamps. About 120,000 veterans in Florida rely on SNAP benefits-that’s more than anywhere else in the country.

Funding for the SNAP program was supposed to run out at the end of January, but an extension means people will get food stamps through February. But as the shutdown continues, it’s unclear what will happen to veterans like 59-year-old Army veteran David Tillmon if food stamps are cut off.

Tillmon relies on a combination of food stamps and food pantries like this one to get him through the month.

HUD-VASH is a housing program for chronically homeless veterans. At the prospect of veterans losing food stamps, Tillman sighs:

“It seems like they just don’t care or they don’t get it.”

“Believe it or not, they can get by on 200 dollars of food stamps. It’s hard, but they can do it. And without that, I can tell you that the probably seven or eight veterans I know with zero income and without food stamps…they would not be able to survive.”

The government shutdown is causing anxiety for people who rely on SNAP benefits. But the Florida American Legion’s Bruce Comer says veteran food insecurity has been a longstanding problem in the state. Comer says veterans have been moving to Florida for years because of the weather without taking into account the high cost of living.

“And then they just find themselves living in areas that are more expensive to live in and the dollar just doesn’t stretch as far as it does in other places.”

The Legion’s 292 posts throughout the state already offer food assistance to veterans. Comer says if food stamps are cut off, they’ll ramp up these efforts.

“But a lot of them will start doing breakfasts at least a couple times a week and they’ll have some kind of food programs. I’ve already gotten a call from two posts about setting up food banks in their area to try and assist.”

Back at the VA food pantry in Baldwin Park, Cristina Mercado says they won’t be able to serve any additional veterans next month.

“Unfortunately, the resources are pretty tight for all organizations because not many people are getting the donations that we once, that they once received.”