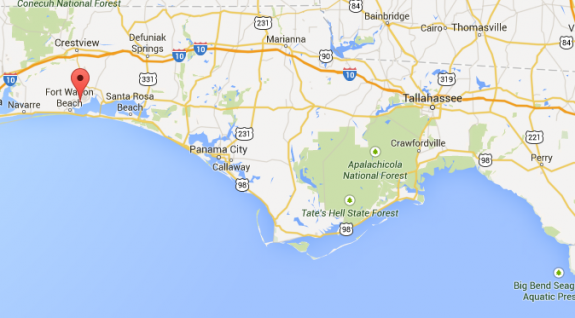 Eglin Air Force Base is located in Florida's panhandle, west of Tallahasse.

An Army National Guard helicopter went down with seven Marines and a crew of four aboard last night. The aircraft had been part of a training exercise at Eglin Air Force Base in the Florida Panhandle, according to the base’s public affairs office.

The flight crew and Marines are feared dead; the Air Force says their names are being withheld, pending next-of-kin notification.

The UH-60 Black Hawk helicopter was reported missing at 8:30 p.m. ET, the military says. Search and rescue teams found debris at 2 a.m. and are still working at the site, which is east of the Navarre Bridge.

Eglin spokesman Andy Bourland says “weather issues” are being looked at as a possible cause of the crash. The area was under a fog advisory last night, and that fog is continuing today, hampering recovery efforts.

The helicopter “went down during a routine training mission on a remote swath of beach between Pensacola and Destin,” The Associated Press reports. “The beach is owned by the military and is used for test missions.”

The Marines on the helicopter are assigned to Camp Lejeune in North Carolina, as part of the Marine Special Operations Regiment. The aircraft, and another Black Hawk that returned safely, is assigned to the 1-244th Assault Helicopter Battalion in Hammond, La.