100 Years On, The ‘Hello Girls’ Are Recognized For World War I Heroics 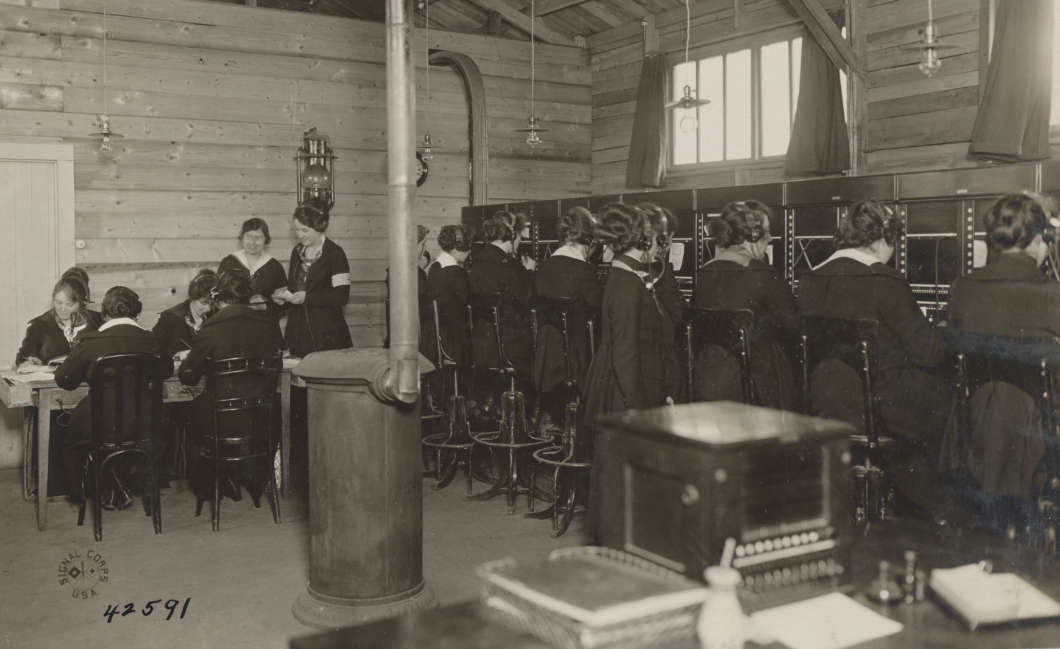 The U.S. military needed skilled operators to handle the telephones in World War I. Known as the Hello Girls, 223 U.S. women served in France. Some worked near the front lines with Gen. John "Black Jack" Pershing, the top U.S. commander. Here, the women work in Seine, France, in 1918. Their story was largely forgotten, but is being recognized on the 100th anniversary of the end of the war.

In a rehearsal space near New York’s Times Square, the cast is preparing for the opening of a musical, The Hello Girls, that’s been a century in the making.

“Very few people have heard this story,” said Cara Reichel, director of the production that premieres off-Broadway on Nov. 13, two days after the 100th anniversary of the armistice that ended World War I.

Reichel hadn’t heard of the Hello Girls either, until a few years ago. Here’s how she describes them:

“America’s first women soldiers, the first women to serve actively in the military, who were bilingual French-English translators, who served on the front lines in World War I” as telephone operators.

So how did these brave women make it to the muddy and bloody fields of France for the war’s most important battles?

The short answer is male incompetence.

In the first modern, high-tech war, Gen. John “Black Jack” Pershing, the top U.S. commander, needed skilled operators who could travel with him and maintain contact with troops scattered over hundreds of miles.

“He rapidly discovered that these doughboys, as they were called, were not very quick,” said historian Elizabeth Cobbs, author of the book, The Hello Girls, which came out last year.

In addition, she said, “it was a sex-segregated occupation. So the men were a little resistant to doing this girls’ kind of job.”

So Pershing appealed for women — against objections from his own Army.

“The Army hated the idea of using women. Just hated it,” Cobbs said.

But young American women loved it. Thousands responded to newspaper ads in the U.S.

“So they recruited women who not only were crackerjack at telephone operating, and who also spoke French who were ‘bilingual wire experts,’ as the Army called them,” added Cobbs.

“It took a man 60 seconds on average to make a connection. It took a woman 10 seconds,” said Cobbs.

A small group of women served at Pershing’s headquarters, near the front and within German artillery range. None was injured or killed directly by the fighting, though two died after contracting the Spanish flu.

Their leader was Grace Banker, just a couple years out of Barnard College and an operator at AT&T when she volunteered.

“I’m just in awe of my grandmother and really what courage and leadership she had in working with these women,” said Banker’s granddaughter, Carolyn Timbie, who is 53 and lives in New Hampshire. But even Timbie didn’t know the full story until recently.

The women apparently were not known as the Hello Girls during the war. According to Doran Cart, senior curator at the National World War I Museum in Kansas City, Mo., the first use of the term he’s uncovered was in a newspaper article that appeared two years after the war, in 1920.

Cart says he believes the term was used “to put women in their place, to call them girls, to show that they were not as important as the men who were serving in the war.”

However, their contribution was not lost on Gen. Pershing. Photos show him reviewing the women and pinning medals on them shortly after the war.

Grace Banker was among a select few, male or female, to win the Distinguished Service Medal. And when the women returned to their hometowns, many were recognized for their extraordinary service.

But when they applied for veterans’ status and benefits, “the Army decided they were contract workers and said to them, ‘Well, you were very well paid, miss. You know, you don’t need to worry about this,'” said Cobbs.

The women petitioned one president after another, from Franklin Delano Roosevelt in the 1930s to Jimmy Carter in the 1970s. Finally, in 1977, six decades after the war ended — and after most of the Hello Girls had died — they were finally recognized as Army veterans.

Cobbs described the remarks of one survivor, Merle Egan, delivered to the Army when she was at last recognized as a veteran: “I deserve this medal not just for serving in France, but for fighting the U.S. Army for 60 years and winning.'”

This vindication seemed to be the end of the story.

But a couple years ago, Cobbs started working on her book and tracked down Carolyn Timbie, the granddaughter of Grace Banker

Timbie had a trunk in New Hampshire with her grandmother’s stuff, but had never really given it a close look.

“It just was this treasure trove of all these things my grandmother had kept from 100 years ago,” said Timbie.

The contents included Banker’s uniform, her helmet and gas mask as well as a range of items she collected from battlefields after the fighting stopped, such as cigarette lighters, shell casings and bullets.

And Timbie also had her grandmother’s diary.

So the Hello Girls are making a comeback. The book by Cobbs was well received. Then came a documentary. Now there’s a novel, Girls On The Line, based on their story. Two U.S. senators have proposed a posthumous Congressional Gold Medal.

And director Cara Reichel’s team is fine-tuning the musical, which opens Tuesday.