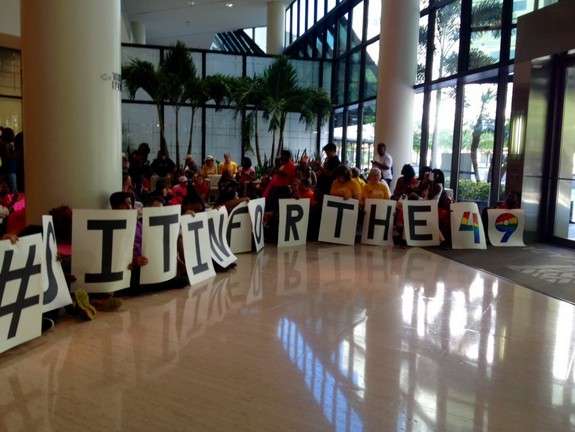 Around this time last month, the people of Orlando were forced to confront a horror we could not comprehend and then assimilate into this new normal without 49 loved ones and a constant ache. And now, earlier this week, we were confronted by something else: Ten protesters were arrested by police after a sit-in at U.S. Sen. Marco Rubio’s downtown Orlando office, where about 70 protesters demanded legislation for gun control, LGBTQ protections and safer communities of color.

Protesters say they chose Rubio because he “continues to terrorize” queer communities of color by voting for legislation that “discriminates, dehumanizes, and denies access to the American dream.”

Rubio’s office released a statement saying he respects the views of others and welcomes the input.

Some didn’t agree with their positions or tactics, questioning why protesters essentially decided to get arrested by Orlando Police for trespassing by staying in the private building where Rubio’s office is located.

But for the protesters, the sit-in was not only to get Rubio to act–it was a way to honor their friends that had been lost at the gay nightclub Pulse or in the violence perpetuated on people of color. A recurring theme throughout their songs during the sit-in was the hope that these people did not die in vain. Too many times to count, they chanted, “No justice, no peace.”

If there’s anything we can agree on in these divided times, it’s that Jimmy DeJesús, Luis Daniel Wilson-Leon, Amanda Alvear and the other 46 did not die to just become a list.