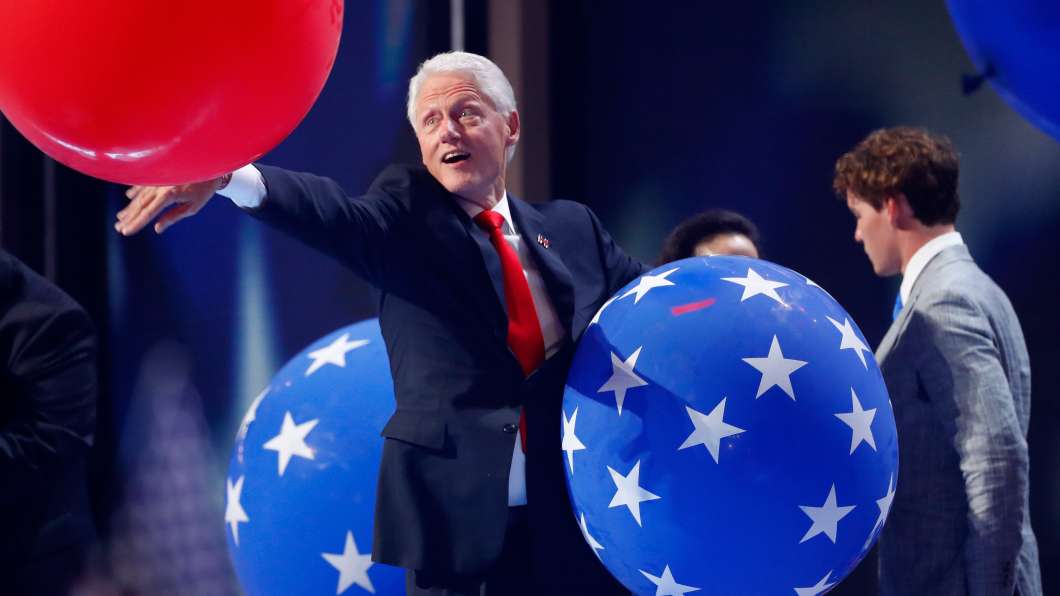 Former President Bill Clinton plays with balloons onstage at the end of the fourth day of the Democratic National Convention at the Wells Fargo Center in Philadelphia in July.
Image credit: Aaron P. Bernstein

Elections aren’t exactly cozy, even in the best of times. This one, though, felt worse for a lot of people.

No matter where your allegiances lie, 2016 has been the emotional equivalent of a dumpster fire. But it wasn’t all unbearable. Here and there, lighter moments emerged to provide comic relief — or even a small burst of joy. Here are 10 of them, in no particular order.

When the balloons fell from the rafters on the final night of the Democratic National Convention, Hillary Clinton and her running mate Tim Kaine had a lot to feel triumphant about. The Democratic Party seemed to be uniting around Clinton as its candidate. But as the Philadelphia arena filled with red, white and blue globes, no one seemed to enjoy it quite as much as Bill Clinton, who looked up with childlike wonder.

Back in November 2015, when Donald Trump was still in his campaign’s relative infancy, he made an appearance on Saturday Night Live. The whole sketch was making fun of Drake’s undeniably dorky dance moves in his video for the song “Hotline Bling.” The SNL version had middle-aged dads and teachers dancing to the song and “tax guys,” which is the moment when Trump appears and even — sort of — sings a bit. “You never call me on the cellphone,” Trump says in a droll voice. He did not skimp on the old-man dance moves. It’s a reminder that he is, at 70 years old, somebody’s grandpa. Although this sketch was mostly making fun of Drake, it’s also a reminder that sometimes politicians are at their best when they allow themselves to be the butt of the joke — something Trump hasn’t done much of since.

3. Hillary Clinton on Between Two Ferns

Clinton has said she’s not a “natural politician.” That might be partly why she can come off as cold to some people. But many who have known her in private describe her as warm and personal. That disconnect was problematic for Clinton as a candidate. But she leaned into the caricature in a winning appearance on Zach Galifianakis’ Web comedy series Between Two Ferns. Galifianakis asked her intentionally ridiculous questions, like, “How does President Obama like his coffee — like himself, weak?” Clinton kept up with him, deadpanning like a pro. It brought to mind the Clinton persona created in the “Texts With Hillary” memes from a few years ago or the “nasty woman” memes from this year: a strong woman with no time for nonsense.

At a March rally in Portland, Ore., Democratic candidate Bernie Sanders channeled his inner Snow White. In the middle of his speech, people in the crowd started to laugh and point: A bird had landed on the stage. While Sanders looked at the ground, it flew up and perched right on his lectern. The Vermont senator spent nearly 30 seconds just smiling at the little guy, making it quite possibly the most peaceful and unplanned campaign moment this year. Sanders might have taken it a little too far, though, when he proclaimed that the bird symbolized “a dove asking us for world peace.” No, Bernie, it was just a cute, little bird, and that’s OK, too.

Both President Obama and former President George W. Bush spoke at the Sept. 24 opening of the National Museum of African American History and Culture. Bush had signed the 2003 bill authorizing the museum. When President Obama and first lady Michelle Obama arrived onstage, the first lady greeted the former president warmly, with a little side hug that Bush sweetly leaned into. For many, the Bush and Obama families represent opposite ends of the political world, but this small moment showed that disagreement doesn’t have to stifle common decency.

For a brief moment, normal Midwestern decency stole the spotlight. For a brief moment. At the Oct. 9 presidential debate, a man in a red pullover asked a question about energy policy and won America’s hearts. Maybe it was the sweater, or his mustache, or his earnestness. It certainly helped that his name was the made-for-the-Internet Ken Bone. Whatever the reason, Bone became an instant meme.

The Bone Zone, as he referred to himself, took advantage of his newfound fame and started to sell T-shirts and partnered with Uber to promote a new, local service. After a few days though, Reddit users got hold of Bone’s real account when he used it for an AMA (Ask Me Anything). They unearthed controversial statements he made (and photos posted), including that the killing of Trayvon Martin was “justified.” Even for a meme, it was a rapid ascent and fall. What the Internet giveth, the Internet taketh away.

Clinton played it safe with her choice of running mate: a scandal-free white dude with a lot of experience from a swing state. Maybe it was that background — combined with a Normcore sobriety and some pretty rad harmonica skills — that reminded a lot of people out there of a certain kind of dad we all recognize.

President Obama and Joe Biden truly seem to have a close friendship, which isn’t always the case between a president and vice president. When Biden’s son had to leave his post as Delaware’s attorney general because of cancer, and Biden worried he’d have to sell his house to support his son’s family, Obama offered to help financially. When Obama turned 55, Biden tweeted happy birthday and called him “a brother to me, a best friend forever.” As the two men leave office, people have imagined how their bromance (or BROTUS, if you will) is playing out during the transition. For many, it was much-needed comic relief during uncertain times.

Apparently Ted Cruz loves the movie Princess Bride. We mean, really loves. We know this because he re-enacted an entire scene from the movie during a November 2015 campaign stop at the New Hampshire television station WMUR. In a video from the event, Cruz is at the head of a conference table with a small group of people when he starts describing a scene from the movie. He starts out quietly, just explaining some of the lines. Then he launches into a full Billy Crystal impression, which is actually not half bad (Crystal makes a cameo as an apothecary in the movie). The people in the room are laughing — and maybe a little stunned — but he gets a round of applause at the end. The reckless abandon of the moment is pretty great.

Jack Aiello’s eighth-grade graduation speech will be remembered for all time by appreciative classmates, parents and people who just plain needed a break from a nasty campaign. He did it in the uncanny style of some of the 2016 candidates, and it’s amazing.

He nails Trump: “Quite frankly we’ll win so much you’ll be sick of winning.” But it was his Bernie Sanders that really shined, especially when he calls for a “cinnamon roll revolution,” in which all cinnamon rolls will be free, apparently?