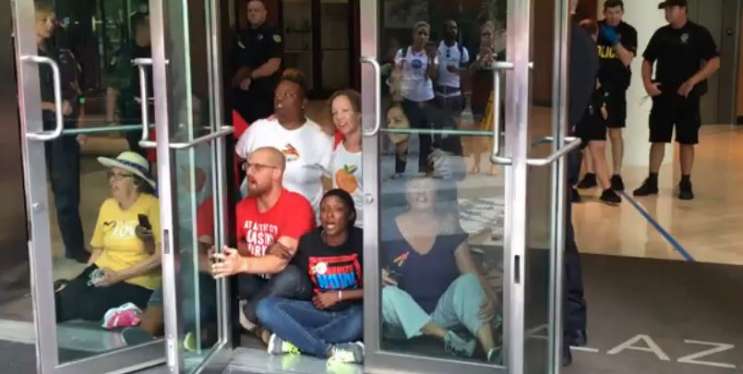 10 protesters were arrested during a 49-hour sit-in at Senator Marco Rubio's office in Orlando. (Ali Kurnaz)

Dozens of protesters started the 49-hour sit-in yesterday morning to remember the 49 victims of the Pulse nightclub shooting. The arrests happened at the request of the building’s owner, when the building was closed to the public.

According to video of the incident, most protesters left while chanting “This Little Light Of Mine.” But ten protesters knelt at the entrance and were arrested for misdemeanor trespass, according to police reports.

A social media statement from the community organization group Organize Now said all ten were released as of this morning. Protesters said they targeted Rubio in part because of his voting record on gun-related legislation.

Rubio’s office released a statement saying in part, “Over the past month, Senator Rubio has supported common sense compromises to make it easier to track individuals who have been on the terror watch list and later try to buy firearms, all while improving due process protections for law abiding Americans.”

The Orlando Police Department tweeted that they were “grateful to peaceful protesters who understand we have a job to do.”