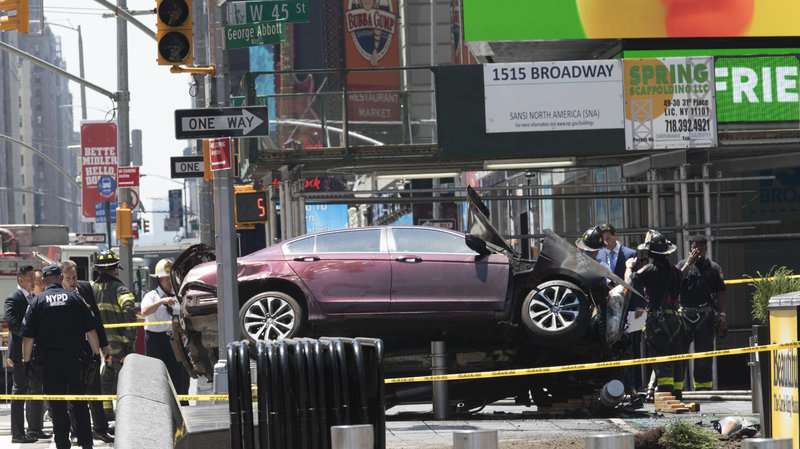 A car rests on a security barrier in New York's Times Square after it plowed through a crowd of pedestrians on Thursday. Mary Altaffer/AP

At least one person was killed Thursday when a vehicle hit a crowd of pedestrians in Times Square, according to fire officials in New York City. Twenty-two other people were injured in the incident.

At a news conference Thursday afternoon, NYPD Commissioner James O’Neill described the scene: A maroon Honda Accord leaped the curb at Seventh Avenue and 42nd Street, plowing onto the sidewalk for several blocks “at a high rate of speed” before finally crashing into a stanchion at 45th Street. After the car came to a halt, the driver tried to flee before officers took him into custody.

“People were being hit and rolling off the car,” one witness told Reuters.

O’Neill identified the suspect as 26-year-old Richard Rojas, describing him as a U.S. citizen and former service member with multiple previous DWI arrests. The commissioner said there is no indication that the incident was related to terrorism.

One woman was killed at the scene, and four other people remain in critical condition, FDNY Commissioner Daniel Nigro said at the news conference. A total of 22 people have been hospitalized.

“This is a tough day for New York City, but I want to thank our first responders who got here so quickly,” Mayor Bill de Blasio wrote on Twitter. “We feel deeply for those injured and particularly for the family of the young woman who was lost. Our prayers are with all of them.”

In a statement, Gov. Andrew Cuomo called the day’s events “nothing short of horrific.”

“As facts continue to emerge, my heart goes out to the victims of this terrible tragedy, as well as their families.”