1 Person Dead In Shooting That Followed Day Of Far-Right, Far-Left Rallies In Denver 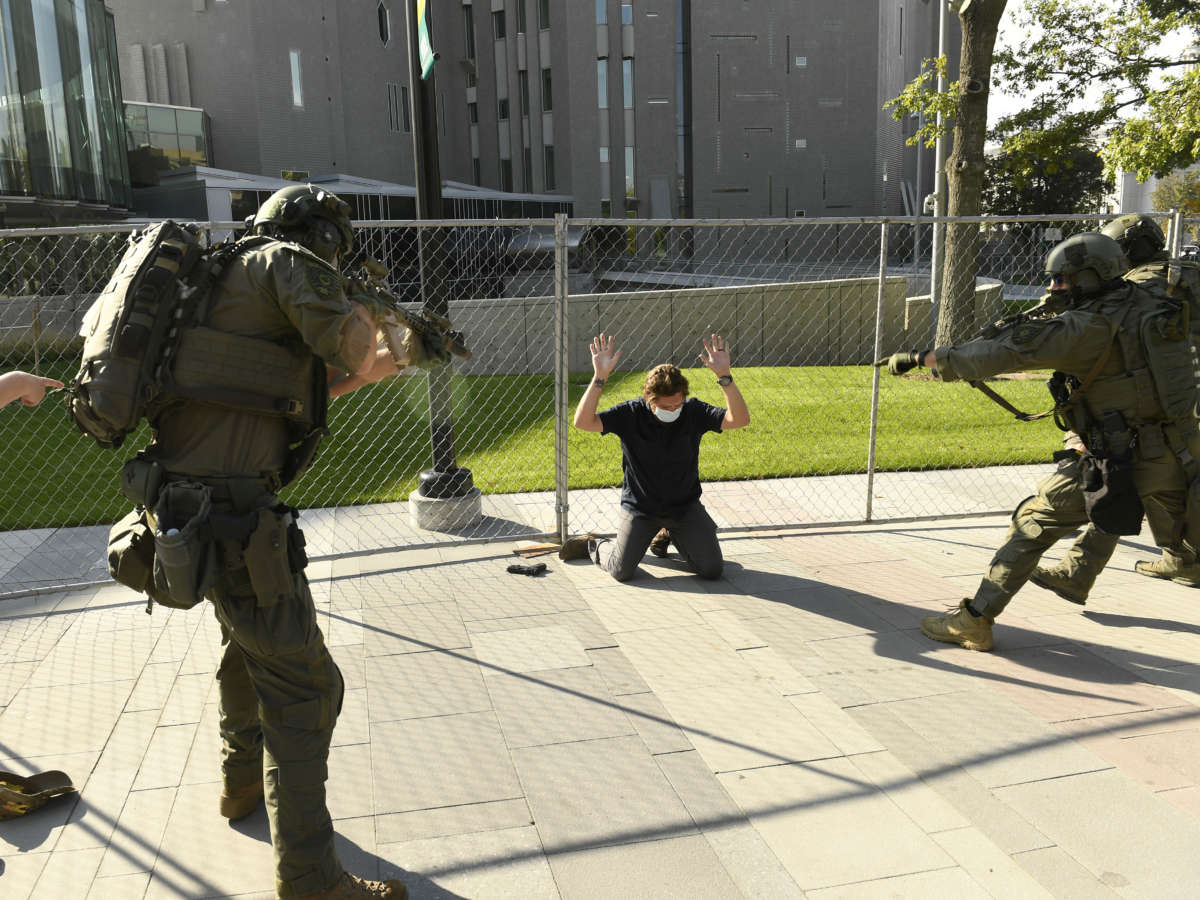 A man holds up his hands as he is taken into custody after a fatal shooting in Denver on October 10, 2020. The shooting came at the end of a day of competing rallies by far-right and far-left demonstrators.

One person was killed and another man was in police custody after a fatal shooting in Denver on Saturday that occurred towards the end of dueling rallies by activists on the far-right and the far-left.

The Denver Police Department said it had taken a private security guard into custody in connection to the shooting. On Sunday, the department identified the suspect as 30-year-old Matthew Dolloff. He has not been formally charged.

A local news channel, 9News, said it had contracted Dolloff through the Pinkerton security firm as a guard to accompany staff covering the protest. Contracting private security to protect reporters and producers at protests has been a practice at the outlet for several months, 9News said.

The shooting took place near the Denver Art Museum when competing far-left and far-right protests were winding down nearby. Activists from the far-left were in the area for a “Black Lives Matter Anti-Fascist Soup Drive” organized by the Denver Communists, Colorado Socialist Revolution and other groups, according to Colorado Public Radio. The right-wing demonstrators had gathered for what was billed as a “Patriot Muster” organized by John “Tig” Tiegen, founder of the United American Defense Force group, CPR reported.

Until the shooting, the protesters mainly chanted and yelled and each other, separated by police, the Denver Post reported. Video of the incident posted to social media showed the shooting victim involved in a tense dispute with a man wearing a “Black Guns Matter” T-shirt.

The video shows the victim step away from the man, and then seconds later, he is shot by another person.

A Denver Post staffer was at the scene of the fatal confrontation, the newspaper reported. Photos from the Post show the shooting victim spraying what appears to be a mace-like substance at an unidentified man pointing a gun at him just before he is shot.

Two guns and mace were found at the scene, said Joe Montoya, the division chief of investigation at the Denver Police Department. The police have camera footage of the shooting and are investigating, Montoya said.

The police later tweeted that the suspect is not linked to antifa. The victim has not been identified.

Other shootings by civilians have happened at protests surrounding police and racial injustice in the past several months. An Illinois teen is facing homicide charges in the shooting deaths of two protesters in Kenosha, Wis. in August. Michael Reinoehl, who identified as an antifa supporter, was killed by police after expressing responsibility for the fatal shooting of a right-wing protester in Portland in September.